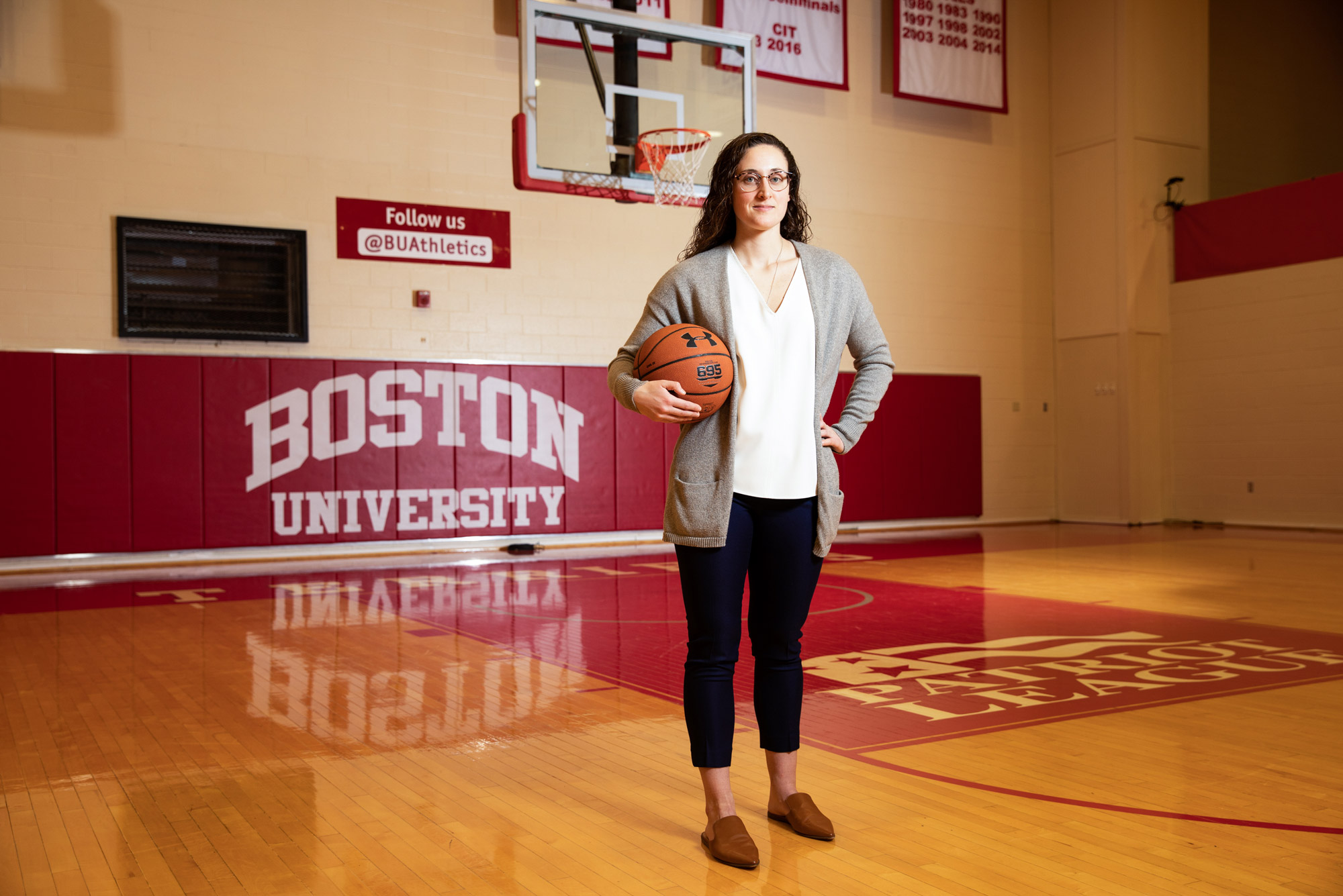 Sarah Hope (COM’17) is back at BU after two seasons on the Holy Cross coaching staff. The former women’s basketball captain is now in her first season as an assistant coach with the BU program. Photo by Jake Belcher

Back with the college basketball program she played for, Sarah Hope is now thriving in her intended career path, using her degree in communications and her skills on the court as an assistant coach for the women Terriers.

“My favorite part about BU in general, and why I loved my experience so much, is the people,” Hope says. “A lot of people are still here from when I played. Just being around the family culture, I think BU is very unique in that way.”

After graduating, she spent a year and a half as the Holy Cross women’s basketball director of operations before being promoted to assistant coach midway through last season. But all along, she kept tabs on BU and appreciated the way the program worked diligently no matter the win-loss record.

Things were set in motion for a return to BU when Moseley was hired, and like anyone looking to climb up the ladder, Hope began networking with the new coach in spring 2018.

She and Moseley first chatted, briefly, before a regular season meeting between their teams last season. They spoke about Hope’s development as a coach and what she could do in her current role. Moseley says she was excited to help a fellow BU alum “progress in the business.”

“You know, a few months later, I would really help her,” Moseley says, “and she would help me.”

They spoke further at the 2019 Final Four in Tampa Bay, Fla. When BU assistant coach Elizabeth Belanger left the program to pursue an opportunity outside of basketball, Moseley suddenly had an opening to fill.

Hope applied immediately, and was hired in May.

“Coming back to my home means a ton to me,” Hope says, “and for Marisa and the staff to have that trust in me to come back to my alma mater means even more.”

There were some considerations about hiring such a recent alum of the program. Moseley reached out to two of her current players, Nia Irving (Sargent’20) and Vanessa Edgehill (COM’20), who were teammates of Hope’s during the prospective coach’s senior year, and asked them about being coached by their former captain.

They were all in.

“I texted Sarah a couple of weeks after coach [Belanger] had left, and I just said, ‘Hey, I don’t know if this has been posted yet, but there’s obviously going to be a job opening,’” Irving says. “‘I don’t know if you want to apply or even if you have already.’ I always wanted her to get it.”

The transition has been seamless.

“They’ve been really mature about it, as has Sarah,” says Moseley, who left an assistant coaching job at UConn to become BU head coach. She began her own coaching career when she was just a year older than the oldest players on her first team. “Trying to walk that line of having remember-whens, all these different memories you have with them, but also understanding you have a job to do. I think she’s done a really great job.”

Irving and Edgehill already had a healthy respect for the new coach as a leader since she was team captain when they played together. Hope was “a teaching captain,” and as freshmen, they looked up to her.

“She’s very good at building bonds with people,” Irving says. “She’s a great friend to have, and I think that makes it easier when she’s coaching you, because she’s coming from a good place.”

She just has a huge passion for BU. She really does bleed scarlet.

As an assistant coach now, Hope is back on the floor in a teaching role, working most closely with the guards. While starting as a director of operations helped her see the other side of running a program, she’s pleased to be back on “on the basketball side,” she says.

“I’m just really thankful, because not only am I helping this current team, but I care so much about this program specifically because I played for it,” she says. “Just putting in the heart and soul, anything I can do for this team on the basketball side has been an incredible experience.”

“There’s a little bit of a learning curve,” Moseley says, but Hope’s dedication is unrelenting, and the 24-year-old also is a boon for recruiting, able to connect with prospects on a personal level.

“I couldn’t teach the passion or the work ethic, so I think those two things really stood out,” Moseley says. “I knew that she was going to connect with players, especially with her age not being that far removed.

“She just has a huge passion for BU. She really does bleed scarlet.”

Hope Returns: 2017 Alum Is Back as Terrier Women’s Hoops Assistant Coach
0
share this