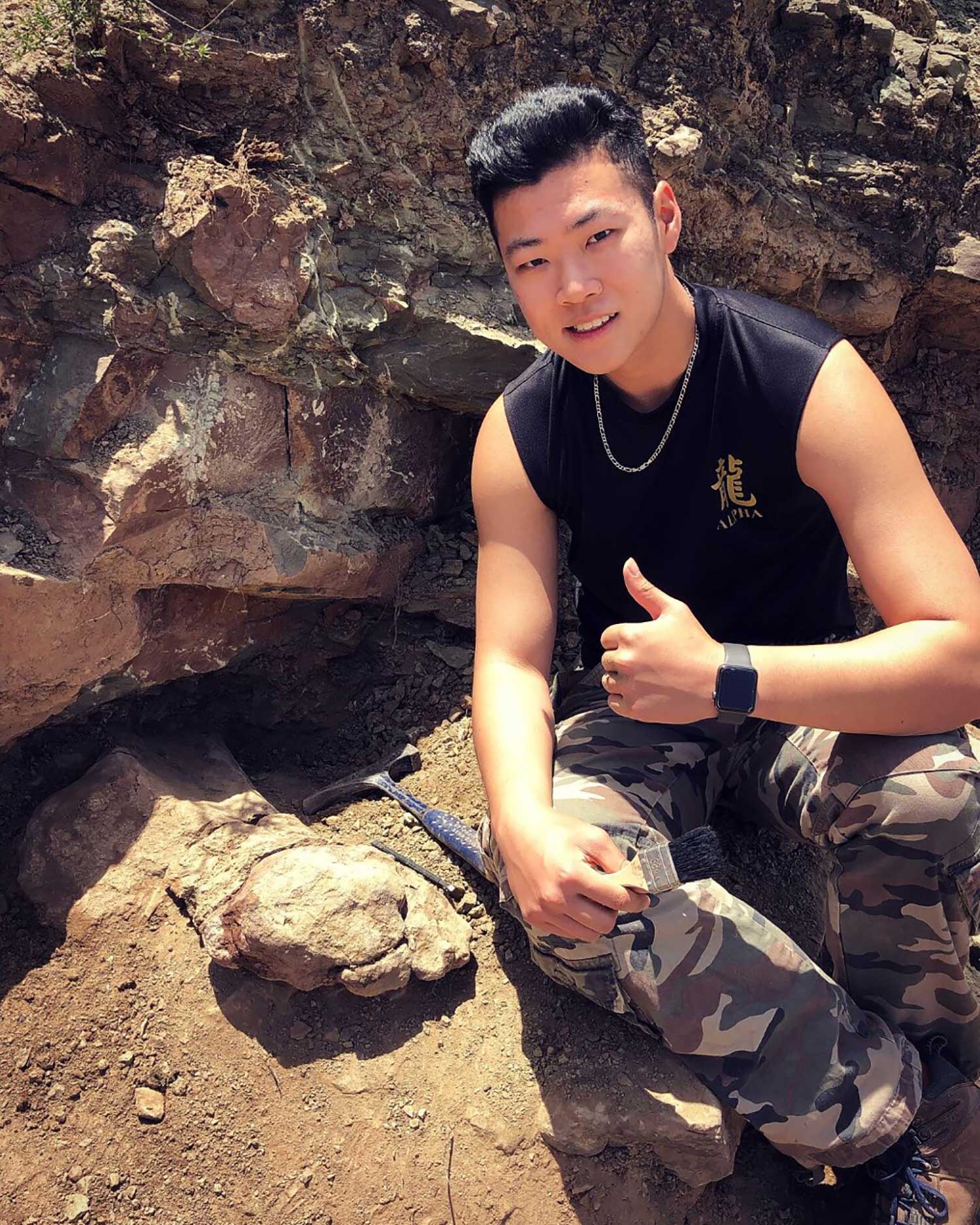 Henry Liu (COM’21) discovered a yet-to-be named specimen that is estimated to be the largest individual ever found of this species of dinosaur, a member of the plant-eating mamenchisaurid family that’s closely related to the better-known brachiosaurus. Photo courtesy of Liu

In May 2019, Henry Liu was warding off the scorching sun and dealing with sandstorms and dust storms while wandering through the Badlands of Baiyin in China on a dinosaur hunt. Out in the field for five hours one day without finding even a single bone shard, the prospecting team he was with gave up and broke for lunch. Liu (COM’21) was feeling restless and kept making his way slowly along a dried-up riverbed. He looked down and saw what he was sure was a dinosaur bone fragment. He followed the Hansel-and-Gretel-like trail up a small hill until he came upon multiple bones embedded deep in the earth.

He was right. In fact, the bones he discovered were the remains of a massive dinosaur, one that scientists still have not named. It was only the second time this species had been found in the area, making it a very significant discovery, paleontologists say. And Liu’s specimen is estimated to be the largest individual ever found of this species, a member of the plant-eating mamenchisaurid family that’s closely related to the better-known brachiosaurus. Larger species from the family had a neck that spanned 30 feet, enabling it to reach tree canopies with its spatula-shaped teeth, and it was nearly the length of three semitrailer trucks. The family of dinosaurs lived from the Early Jurassic epoch to the Early Cretaceous epoch (191 to 113 million years ago), and fossils of its members have been found across much of China, as well as in Western Siberia and Tanzania.

The bones were found last year and excavated over the course of a few months.

The dig’s lead paleontologist, Li Daqing from Lanzhou, China, says that many of the bones uncovered so far are pelvic bones. With the ischia—part of the pelvis—measuring over three feet, scientists have estimated that the entire pelvis likely spanned around five feet, which is much larger than the pelvic fossils belonging to the previous specimens of the species.

“This find is important,” Daqing says, because “mamenchisaurid sauropod dinosaurs are hard to be preserved as fossils due to their large size.” What’s more, this find helps paleontologists connect the previous findings in the southwest of China with the dinosaurs they discovered in the country’s northwest, he says, “which is helpful for the studies on the phylogenetic evolution and paleobiogeographical distribution of mamenchisaurids.”

Liu says dinosaur hunting isn’t as easy as many think—it’s not like giant complete skeletons are sticking out from a hill. “People think you dig your shovel down and you’ll find a whole bone,” he says, “but in reality, you find bone fragments leaving a trail, and if you’re lucky, it will lead you to the origin source. They can be hard to tell apart from a normal rock.”

An advertising major and founder of Boston University’s International Students Organization, Liu, a Singaporean who grew up in China, has been infatuated with dinosaurs and paleontology for as long as he can remember. “Since I was a little kid, I’ve been a big nerd for dinosaurs,” he says. “I love them, prehistoric life, everything to do with fossils and paleontology.”

He recalls visiting the fossils at the Gansu Geological Museum in Lanzhou in particular, a private tour his family arranged for him when he was 12. One display had two small dinosaurs next to each other. They looked very similar, except for their skulls. After studying them for a minute, Liu realized their name tags were switched, so he told the guide.

What he didn’t know was that standing four feet away was the museum’s chief scientist—Daqing, who was working on a new exhibit. He overheard, came over, and realized Liu was right. “We started talking, and he was excited that I was excited,” Liu says. “He invited me to come join his team on a future excavation, and my first time going out in the Gobi Desert was when I was 15.”

Liu has spent every summer since high school fossil hunting with the team, working in the Gobi Desert and the mountainous areas in Gansu and Xinjiang. “With great passion for nature and paleontological fossils, he is very dedicated to his work in the field, never complains about the work or stress and exhaustion, which leads to rare finds and makes him an outstanding member of our team,” Daqing says.

While Liu loves paleontology, he plans to pursue a career in digital advertising and marketing once he graduates in May. “I want to dedicate my professional life to leaving my own mark in this field, as I believe advertising and marketing are a more important endeavor for me as a person,” he says. “My passion for paleontology will always be my lifelong hobby though.”

Thanks to Carol Duan for translation help.