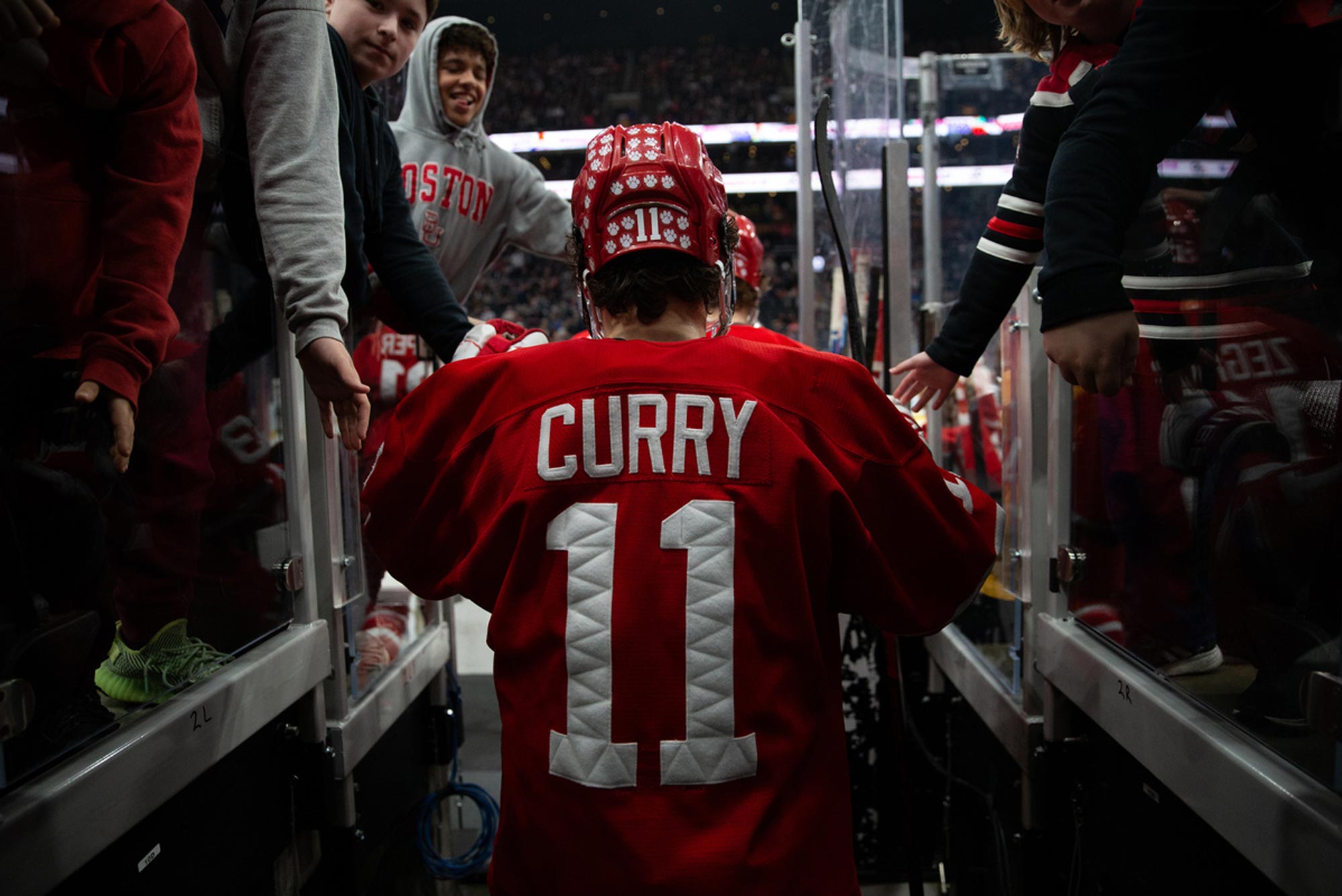 2019-2020 BU ice hockey captain Patrick Curry is one of four Terriers who have signed to play professional hockey.

Next year’s BU captain and alternates named as well

Year in and year out, the Boston University men’s ice hockey program churns out professional players. This year is no different: four Terriers have inked contracts to play professionally as the 2019-2020 BU campaign ended, three of them with the National Hockey League.

Trevor Zegras inked his entry-level NHL deal with the Anaheim Ducks, and Cam Crotty with the Arizona Coyotes. Patrick Harper signed with the Nashville Predators, and this year’s team captain, Patrick Curry has signed an American Hockey League contract with the Grand Rapids Griffins.

Zegras’ and Crotty’s deals are for three years, Harper’s and Curry’s for two. Here’s a look at their BU careers.

This past year, the Greely, Ontario, native was assistant captain of the men’s hockey team. During his sophomore year, he was one of only six Terriers to play in all 38 games, and he finished third on the team in blocked shots, with 68. As a freshman,  he was named to the Hockey East All Academic Team. Crotty has signed a three-year entry-level deal with the NHL’s Arizona Coyotes.

As a senior, Curry was team captain, was named the 2019-2020 Hockey East Best Defensive Forward, and was a finalist for the Walter Brown Award, given annually to the top American-born college hockey player in New England. During his junior year, he was twice named a Hockey East Top Performer, and as a sophomore, he scored the game-winning goal in the 3-2 overtime win over Harvard in the Hockey East semifinals. Freshman year, he played in all 39 games and was twice named a Hockey East Top Performer. Curry, from Schaumburg, Ill., signed a two-year entry-level deal with the Grand Rapids Griffins, the AHL affiliate of the Detroit Red Wings.

Harper was alternate captain this past season and was named a Hockey East Third Team All-Star. He was also chosen Hockey East Player of the Month in December. He ended the season second on the team in points and became the 84th player in program history to record 100 career points. During his junior year, the New Canaan, Conn., native was twice named a Hockey East Top Performer. As a sophomore, he was on the team that won a bronze medal for the United States at the 2018 World Juniors Championship, and his freshman year, he was named to the 2017 Hockey East All-Rookie Team and selected a Hockey East Top Performer three times. At the 2017 World Juniors Championship, Harper scored a goal to help the United States win gold. He has signed a two-year entry-level deal with the NHL’s Nashville Predators.

“Patrick is a dynamic player and with his size [5 feet, 7 inches, 150 pounds] excels in the way today’s game is played,” says Scott Nichol, Predators director of player development. “He fits in well on the power play and uses his biggest on-ice attribute—his hockey sense—to his advantage.”

Zegras made an immediate impact this year as a freshman: he was selected to the Hockey East All-Rookie Team and named a Hockey East Third Team All-Star. In addition, Zegras, of Bedford, N.Y., was twice named Hockey East Rookie of the Week and was a Hockey East Rookie of the Year finalist. At the 2020 World Juniors Tournament, he finished first in assists among all the players and led Team USA in points. Before BU, Zegras became just the fourth player to record 100 assists with the US Hockey National Team Development Program in the program’s history. He has signed a three-year entry-level deal with the NHL’s Anaheim Ducks.

“We are happy to get this contract done and start Trevor’s professional career,” Bob Murray, Ducks executive vice president and general manager, said following the announcement. “He’s got quite a bit of work ahead of him, but we know he’s got the talent and intelligence to be an impactful NHL player.”

Also in the flurry of off-season hockey news, Logan Cockerill (SHA’21) will wear the “C” as BU’s hockey team captain next season, and Ty Amonte (SHA’21), Kasper Kotkansalo (COM’21), and David Farrance (CAS’21) will be alternate captains. Cockerill was an alternate captain this past season.

“We were very excited that Logan was voted by his teammates to be the next captain of BU hockey,” says Albie O’Connell (CAS’99), BU head coach. “Logan is a natural leader and his competitive spirit on and off the ice is infectious. He has big shoes to fill with Patrick Curry graduating, but after wearing an ‘A’ this year as a junior, he has already demonstrated that he can lead. We’re confident that Logan will be able to keep the team connected and focused during these difficult times.”

Cockerill’s NHL rights are owned by the New York Islanders, but he is returning for his final season to captain the Terriers. As a sophomore, he earned a silver medal with Team USA at the 2019 World Juniors.

Of the four members of the 2019-2020 Boston University men’s ice hockey roster to sign pro contracts this spring, two, Crotty and Zegras, still had eligibility remaining.

Farrance’s decision not to sign with the Nashville Predators and return to BU was a bit surprising. A top-10 finalist for the 2020 Hobey Baker Memorial Award, given annually to the top National Collegiate Athletic Association men’s ice hockey player, Farrance led NCAA defensemen in points and goals, finishing the year with 14 goals and 29 assists, for 43 points. He also led all blueliners with nine power-play goals and was named a Hockey East Top Performer seven times this season and a Hockey East First Team All-Star.