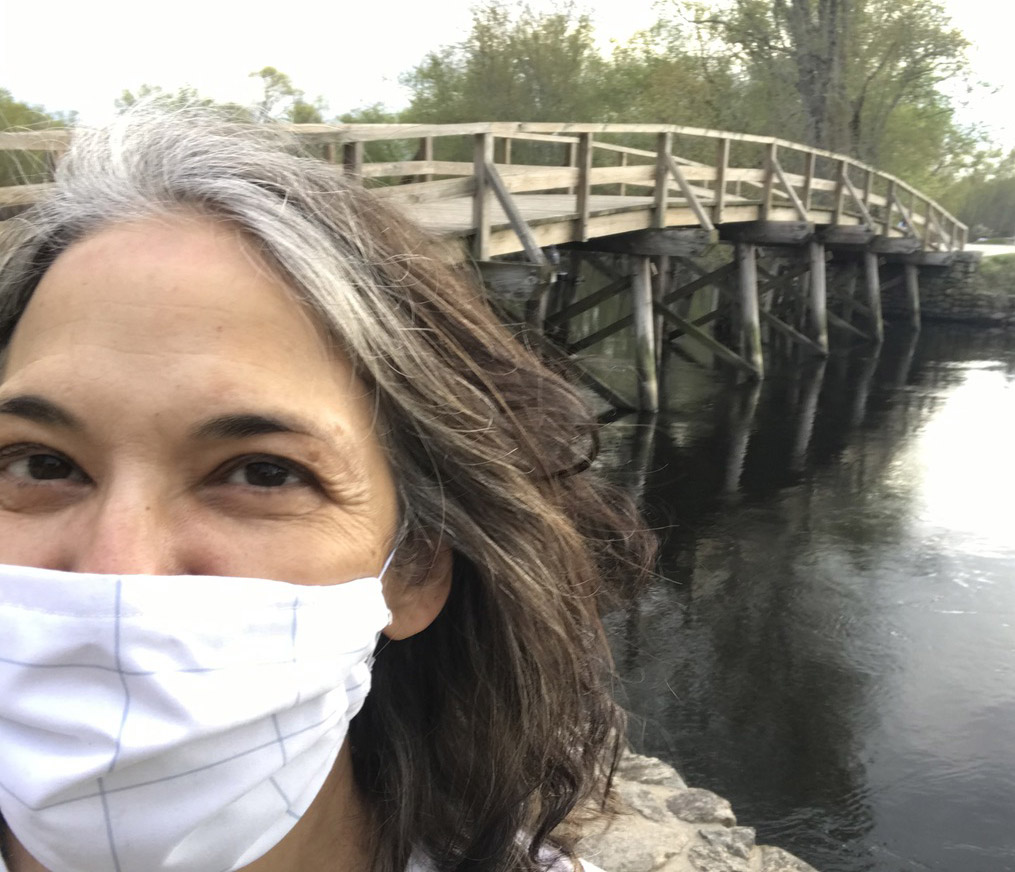 Playwright Melinda Lopez (GRS’00), a College of Arts & Sciences adjunct associate professor of playwriting, set her Dream Boston play at the North Bridge in Concord, where she often walks her dog. Photo courtesy of Melinda Lopez

Dreaming of Boston, When the Pandemic Is Behind Us

In 2024, a custodian gives a young woman access to MIT’s Great Dome so she can scatter her professor father’s ashes during the July 4 Boston Pops concert on the Esplanade. In 2025, a Revolutionary War reenactor finds himself moved once again by the drama at Concord’s North Bridge. And in spring 2022, a first date unfolds in the shadow of the Robert Gould Shaw and 54th Regiment Memorial on the edge of Boston Common.

Theater companies across the country are going virtual these days, with Zoom readings and podcasts filling in for live performances during the coronavirus pandemic. But the Huntington Theatre Company is going back to the future with Dream Boston, a series of short, audio-only original plays that harken back to the days of radio while pulling us forward into a hoped-for post-COVID era.

“These micro-plays are a response to the moment—to theaters being shut down, and wanting to gather to create art with friends and neighbors in a time when we can’t assemble,” says Charles Haugland, the Huntington’s director of new work.

The company has posted 4 of a planned series of at least 10 original plays by local writers, each six or seven minutes long and set in a beloved local landmark. The charge to the playwrights was to bring us into a future when people can once again meet and thrive in the city—to be optimistic about our collective future.

“Hope is a tricky word right now, it’s easy for it to ring false,” Haugland says. “What we love is that each writer has found a way to write about the promise of one possible future in a way that is contrasted with a deep range of ideas and emotions.”

Overture, by Kate Snodgrass (GRS’90), a College of Arts & Sciences professor of the practice of playwriting, uses the MIT dome as its nominal landmark, but that’s really just to get us to a more emotion-laden landmark, the annual July 4 celebration on the Esplanade featuring cannons and the 1812 Overture performed by the Boston Pops. The Boston Symphony Orchestra provided the Huntington with a Pops recording of a past 4th of July concert that sound engineer Valentin Frank uses to create a vivid aural image of a breezy Independence Day atop the dome. Elle Borders and Richard Snee play the young woman and the custodian, who both revered her father.

“I just assumed that July 4 was a holiday where everybody could get together, and you could certainly see the world from atop the dome,” says Snodgrass, who is also the artistic director of Boston Playwrights’ Theatre and its Boston Theater Marathon.

The playwright doesn’t like to examine the source of her inspirations too closely, but says she wrote the play a couple of months ago, during the darkest days of the pandemic’s surge in Massachusetts, when hospitals were overwhelmed with COVID cases and she lost friends to the disease. But, she adds, there was no conscious connection to the young woman’s mission in the play. “It was not a deliberate decision. I wanted it to be cathartic rather than maudlin.”

And in fact, the ending is somehow airy and breezy, and in its own way, happy. But as in all the plays in the series, the future is in a subtle dialogue with what we’re going through now.

“The future is also the present is also the past,” says playwright Melinda Lopez (GRS’00), a CAS adjunct associate professor of playwriting and the Huntington’s artist-in-residence. “There’s no way to talk about hopes for the future without talking about what’s happening now.”

Best known for her award-winning autobiographical solo piece Mala, Lopez was part of the group that created the Dream Boston project, along with Haugland and others.

There’s no way to talk about hopes for the future without talking about what’s happening now.

Her play, By The Rude Bridge, is a monologue delivered by a veteran reenactor—a Redcoat, in fact—on Patriots Day at the birthplace of the American Revolution, the Minuteman National Historical Park in Concord. As played by Lonnie Farmer, the character feels for the dead on both sides, and is moved to ask, “What will we tell our children’s children about what we fought for?”

“I decided to end my play with questions,” Lopez says, “because I feel that ultimately we are in a place of questioning everything, and plays don’t answer questions—they ask them.”

She laughs about the challenges of producing a series of audio plays during the pandemic: casts were a maximum of two, because sound engineer Frank had made two traveling audio equipment kits that were hand-delivered to the actors, who sterilized them before and after recording their performances. But Lopez says the police killing of George Floyd in Minneapolis on May 25 and the Black Lives Matter protests that followed forced some of the playwrights to reengage with their texts as an already intense situation deepened.

The 54th in ’22, by Kirsten Greenidge, a College of Fine Arts associate professor of playwriting and theater arts, has the most obvious connection to those events, being set at the Robert Gould Shaw and Massachusetts 54th Regiment Memorial across from the Statehouse, on the edge of Boston Common, in spring 2022. She had already written the piece, about an awkward first date between characters played by Brandon G. Green and Lyndsay Allyn Cox, by the time the protests began, but seeing live TV coverage of protests on that very spot sent her back to the text to address that.

Still, she says, “I wanted to make sure wherever the piece started, that we ended up in a hopeful place.”

The setting of McKim by Brenda Withers, the lone non-BU playwright among the series’ first four plays, is Bates Hall, at the Boston Public Library’s Copley Square McKim Building. Edward (Nael Nacer), a librarian, and Lil Nunez (Krystal Hernandez), a patron, argue over a book the library doesn’t have, which Lil reserved nearly three years earlier on the recommendation of her now-deceased mother.

Loss figures in each of the four plays as much as hope. But when it comes to the future of theater, when the pandemic and other societal convulsions finally recede, the playwrights are optimistic.

“I don’t have any doubts about the survival of the theater in the big picture,” Lopez says. “We are flexible, and we are going to find a way forward. But we have to demonstrate to our audience, once it’s safe, why we should come back.”

Our current situation has given theater artists “a pretty graphic reminder of what our mission is,” she says, “which is to bring consolation and bring human connection and bring our communities together in one space to ponder big questions. And to entertain and make people laugh and remind them that they’re human.”

In the meantime, the aim is that these six-to-seven-minute plays will take listeners on a short journey and maybe even offer some hope.

“It’s going to be 2025 eventually,” Lopez says. “So what’s that going to look like? Hopefully it’s good news.”

Dreaming of Boston, When the Pandemic Is Behind Us

Dreaming of Boston, When the Pandemic Is Behind Us
0
share this