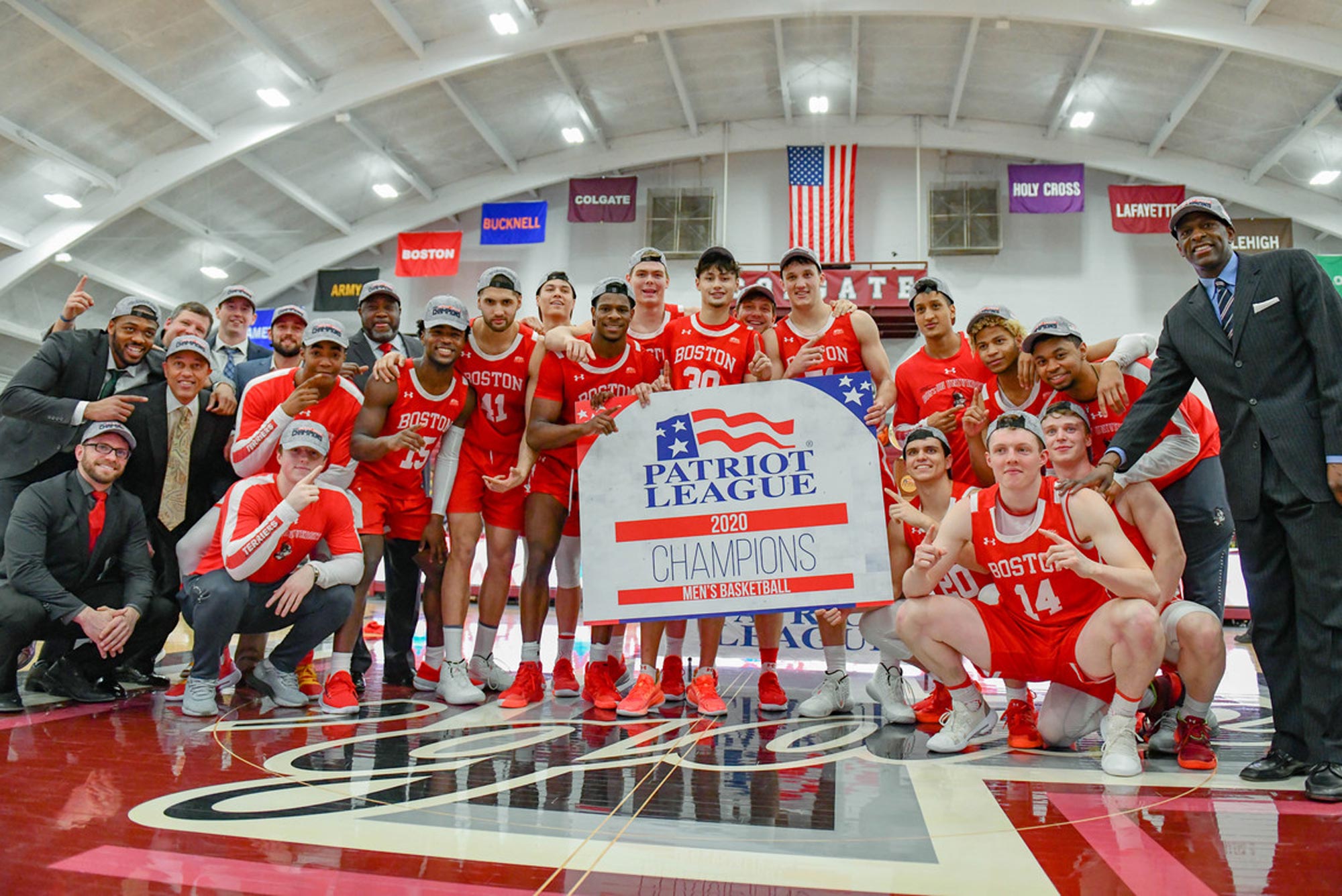 The men’s basketball team took home Moment, Play, and Upset of the Year at the 2020 Rhetty Awards.

In an annual rite of spring, Boston University Athletics handed out its annual Rhetty awards, honoring the best Terrier athletes, on Monday night.

But in a year that saw many varsity teams’ seasons cut short because of the COVID-19 pandemic, the Rhettys, like many events this spring, were moved online. Usually held at the GSU, this year’s ceremony was on YouTube, with awards and acceptance speeches all coming from the homes of student-athletes, coaches, and administrators.

Those honored Monday night during the 2020 Rhetty Awards:

Mildred Barnes Award
Given to the top female athlete of the year; two winners chosen this year

E. Ray Speare Award
Given to the top male scholar-athlete

Gretchen Schuyler Award
Given to the top female scholar-athlete

Paul Lewis Student-Athlete Service Award
Given to a senior student-athlete who demonstrates a commitment to serving BU, the Athletics department, and the larger Boston community over his or her time at BU

A three-year Hockey East All-Academic Teamer, Calderone earned a career-high six assists in her final year at BU. She has been an avid volunteer in various outreach projects sponsored by BU Athletics.

John B. Simpson Award
Given to to a male and a female senior athlete who demonstrate enthusiasm and leadership

Lewis recorded a career-high 35 points on 25 goals and 10 assists as a junior. She ended her senior season leading the team in draw controls, ground balls, and caused turnovers.

Pelose competed in cross country and indoor and outdoor track over his four seasons with BU. As a senior, he finished 26th (26:25.1) and aided the team to a third-place finish at the Patriot League Championships.

Woman of the Year
Given to the female athlete who best exemplifies a commitment to service, leadership, athletics, and academics over her career

Gugel broke through as a senior in leading BU cross country to the Patriot League title, and was named Patriot League Female Cross Country Scholar-Athlete of the Year. She also competed in track and field during her career. She is a corecipient of the 2020 Mildred Barnes Award, given to BU’s top female athlete.

Bruce Lehane Coaching Award
Given to a head or assistant coach who best embodies a holistic, values-based caring approach

After 35 seasons as head coach of men’s soccer, Roberts retired following the 2019 campaign. During his tenure, he earned eight conference Coach of the Year Awards and guided his teams to 14 NCAA Tournament appearances.

Team GPA Award—Golf (3.62)
Given to the program with the top average GPA

Joseph P. Mercurio Campus Community Recognition Award
Honoring an individual who provided “invaluable and limitless” support in the past year

Elswit (LAW’73) is associate general counsel in the Office of the General Counsel, which he joined in 1982. In that capacity, he has represented BU Athletics. He is retiring after this year.

A varsity eight rower, Boudreau (center) helped the Terriers to many top finishes during his BU career.

Cocaptain Gallagher earned her third straight All-Patriot League Second Team award as a senior and played in the 2019 NFHCA Division 1 Senior Game. She was a part of two Patriot League championship teams.

Rookie of the Year

After an injury caused him to miss last season, Whyte earned All-Patriot League Second Team honors and was able to help guide the Terriers to the top—the Patriot League championship.