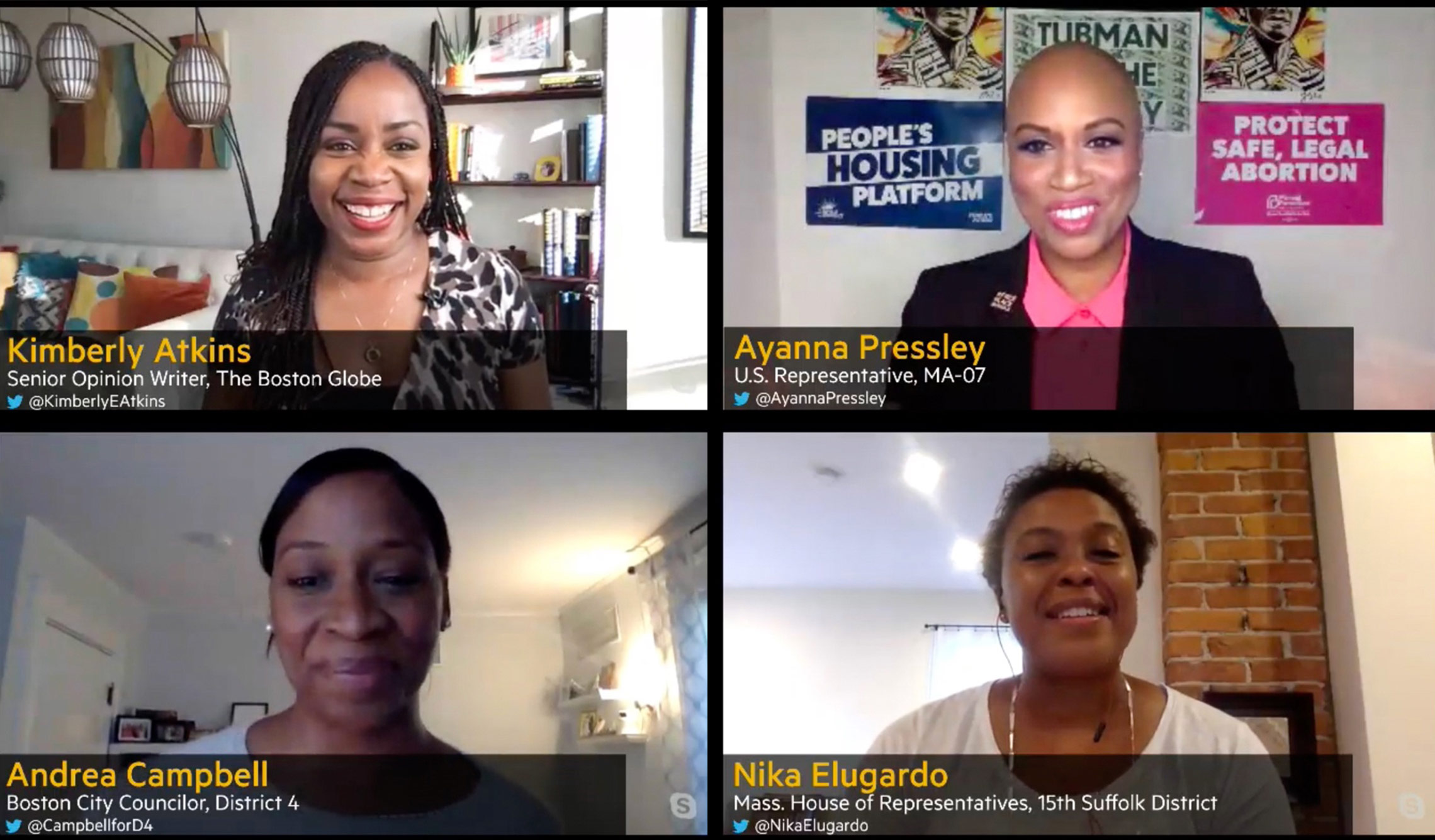 The Black Boston: Changing the Face of Politics virtual discussion brought together three of the city’s noted Black women elected officials to talk about their battles for change. Screen shots by Cydney Scott

Stand in your story. Lean on your community. And don’t listen even a little bit when the old guard tells you that you don’t deserve to run for office, that you shouldn’t even try.

Those were just some of the lessons—rallying cries, really—of a virtual panel Monday night with three Black women who have made their mark on Boston politics. The third installment of the Black Boston series, Black Boston: Changing the Face of Politics, sponsored by the Boston University Initiative on Cities, BU Diversity & Inclusion, and WBUR CitySpace, drew nearly 250 viewers for a tough and inspiring talk about the path facing women and candidates of color in Boston politics. Even college students can start on the path to change, the women said.

“Step outside of your campus. That certainly is what changed my life,” said US Representative Ayanna Pressley (D-Mass.), who attended Boston University’s College of General Studies in the early 1990s, and in 2018 became the first Black woman elected to Congress from Massachusetts. Pressley was also the first Black woman elected to the Boston City Council (at large), in 2010. “When I made the decision to connect to the community around me and not just be conjecturing about things in a classroom, but to get into the community, to pursue that internship, that is what changed the trajectory of my life.”

“All of us could talk about a whole host of issues grounded in the inequities we see every day,” Campbell said. “Persistent inequities in housing, in education, in healthcare, access to greenspace, environmental justice, the arts—the list is long. And we understand that the foundation of those inequities that persist and are exacerbated by COVID 19 is because of structural racism.”

All three women were elected to their current posts in the last five years, and all three faced challenges, starting with racism and sexism. Calling one another “sisters in service,” they talked about what motivated them to take a deep breath, gather their resources, and jump into politics.

We need more of the unusual suspects to run.

Pressley said for her it began with a mother who told her she was “being born into a struggle” and who read her the speeches of Barbara Jordan (LAW’59, Hon.’69), the first Black woman elected to the US House of Representatives from the South, in 1972, and Shirley Chisholm, the first Black woman elected to Congress, in 1968. As a 19-year-old BU student, Pressley interned in the office of US Representative Joseph P. Kennedy II (D-Mass.) and discovered that she could pick up the phone and help constituents with crises like home foreclosure, utility shutoffs, or connection to a food pantry. That showed her both the impact she could have—and the impact of policy on people’s lives. Later, after working for Kennedy and US Senator John Kerry (Hon.’05) (D-Mass), she cashed in her 401(k) pension plan to fund a run for Boston City Council.

Campbell talked about her twin brother, who died of an autoimmune disease at age 29 while in the correctional system, she said, because of inadequate healthcare.

“I’ve had a lot of loss in my life,” she said, “but losing my twin brother hit differently. So I asked really deep questions: what is my purpose? What am I meant to do with my gifts? I channeled that anger, that frustration into prayer—I always name that—and decided ultimately to run, to challenge a 32-year incumbent. And the rest, I guess, is history.

“Unapologetically, taking Congresswoman Pressley’s word, we shared that story, and we did it without any sense of shame. And I’m standing in that story, and it continues to fuel the work,” Campbell said. “How did two twins raised in the city of Boston have such different life outcomes? That is the question, that is the work, and I start out every day to dismantle systems that perpetuate inequity. My brother continues to be my inspiration.”

Elugardo said she was resistant, even offended, when a mentor suggested she should run for office. She was deeply engaged in direct activism and protest, and contemptuous of the political-legal-corporate establishment. “Of course I’ve done all those things now because you must recognize where the seat of power is, that’s where you need to be if you really want to see change and social justice,” she said. But she too was deep in prayer, wondering how to make more change, and when she asked God how to stretch herself further, the answer was a career in politics. She laughed as she told the virtual audience: “I had the biggest internal temper tantrum.”

All three said the nature of Massachusetts politics made their uphill battles even steeper. As Atkins put it, Massachusetts has a lot more smart, qualified, ambitious people than it does available seats. Taking on a powerful incumbent is often required to get elected, as all three women learned.

“Here is a district that is 53 percent people of color, 40 percent foreign-born, nearly 30 percent single female–headed, and yet people still thought it was audacious for me to run, when I had been the top vote-getter for three consecutive elections” for the Boston City Council, Pressley said of her successful primary challenge to incumbent US Representative Michael Capuano (Hon.’09). “I really just felt the district deserved a choice after 20 years. The district has changed, the needs of the district had changed, these times demand a kind of activist leadership that I seek to bring.”

“We need more of the unusual suspects to run,” Campbell added. “People suggest we should ‘wait our turn.’ I don’t think we can wait anymore.”

All three acknowledged that running for office is not for everyone, but said there are plenty of other ways for people to get involved: contribute, volunteer.

“It doesn’t even have to be in politics, because all of life is political,” said Elugardo. “Justice is not charity. Justice is an investment in the future we want.”