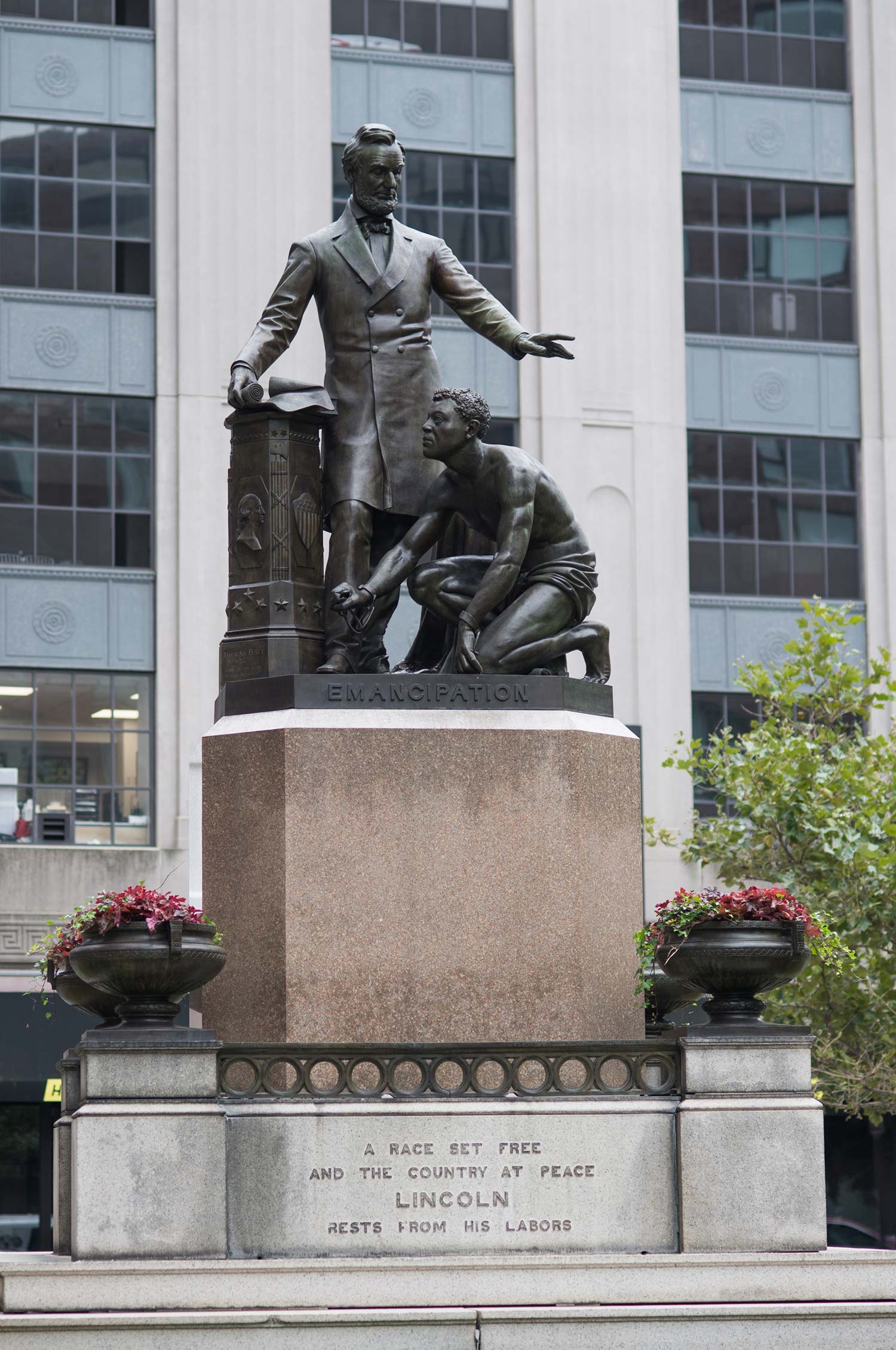 With local activists and art historians saying the memorial erases the truth that enslaved people fought for their freedom, on June 30 the Boston Art Commission voted unanimously to remove the Emancipation Group from Park Square. Photo by Cydney Scott

In 2018, when Ewa Matyczyk was a Boston University PhD candidate in art history, she wrote a report for the city of Boston recommending that the Emancipation Group be removed from Park Square. The statue of Abraham Lincoln towering over a crouched and half-naked formerly enslaved man is “a racist and condescending depiction of an African American figure as subservient to his white counterpart,” wrote Matyczyk (GRS’20).

Her report, which she produced as a BU Center for the Humanities PhD summer intern in the Mayor’s Office of Arts and Culture (the internship is a joint effort of BU’s Office of the Associate Provost for Graduate Education and the BU Center for the Humanities), included research into how other cities were responding to calls for the removal of Confederate statues after the white supremacist rally in Charlottesville, Va., in 2017, as well as a look at some of Boston’s controversial—or potentially controversial—memorials.

Alhough city officials applauded her report, Matyczyk says, “it could have sat in the PDF drawer forever.”

But that was before a Minneapolis police officer killed George Floyd this past May.

Last month, responding to rising demands from local activists that the Emancipation Group be removed, the Mayor’s Office of Arts and Culture and the Boston Art Commission (BAC), the agency that advocates for public memorials, took another look at their former intern’s report and posted it online in advance of a public hearing on the matter. And on June 30, citing Matyczyk’s report, and with the support of Mayor Marty Walsh, the BAC voted unanimously to remove the statue. Plans for its relocation have yet to be announced.

Matyczyk, whose internship was cosponsored by BU’s Associate Provost for Graduate Affairs and who was awarded a PhD this spring, says activists’ unrelenting efforts played a far greater role in the decision than her 2018 report. (In fact, criticism of the statue dates nearly to the dedication of the original, in Washington, D.C. In an 1876 letter historians discovered recently, Frederick Douglass wrote that he’d prefer a statue of a Black man not “on his knees like a four-footed animal but erect on his feet like a man.”)

The depiction of African Americans in the memorial is “antithetical to the city’s self-professed position on race and equity,” Matyczyk wrote in her report, titled “An Opportunity for Change: Discussing Monuments in Boston (& Beyond).”

BU Today caught up with Matyczyk to talk about the Emancipation Group, public art and history, and the national discussion over who gets to tell which stories. The interview has been condensed and edited for clarity.

BU Today: How big a role do you think your report played in the Boston Art Commission’s decision to take down the statue of Lincoln?

Ewa Matyczyk: I don’t think it’s fair to give me or my report much credit. I was thrilled to have the opportunity to write it. But when these activists started bringing this to light, I was nursing a baby. They—and their relentless, exhausting, tireless efforts—deserve the credit. A petition to remove the statue was signed by more than 12,000 people. When I wrote the report, the Boston Art Commission, and the Mayor’s Office of Arts and Culture, were super excited to have this research on hand. I’m a very cynical person. I thought, we’ll see if anything happens. What I’m happy about is that the city had this on hand. They didn’t have to waste any time doing research.

BU Today: What was behind your report’s recommendation to the city that the Emancipation Group be removed?

Ewa Matyczyk: As an art historian and as a private citizen, and with the understanding that I had no real way of enacting that change, I felt strongly that Emancipation Group, more than any of the others [monuments in her report, including statues of Christopher Columbus and Samuel Eliot Morison] needed to go. It’s more out of date and inflammatory, I think, than some of the others. Some of the others were more opportunities for inserting a better history.

BU Today: How did you come to write your report for the city of Boston?

Ewa Matyczyk: I had an internship for humanities PhD students and I wanted to partner with the city. My research for my dissertation had to do with public art in Warsaw [from 1970 until the present]. BU put me in touch with the arts and culture office. They were looking at things that overlapped with my interests. At the time, the BAC was hearing petitions by resident groups displeased with a public artwork in the South End. The debate itself was not based in social justice issues, but it brought up the question of deaccessioning a public artwork, which led the BAC to also consider what might happen in the future with other calls to remove public art in the city.

These monuments and these debates are a great opportunity to commission some new exciting public artwork.

Ewa Matyczyk: It was after Charlottesville. They were realizing that sooner or later something was going to happen in Boston. This was not the first time people had called for the removal of the Emancipation Group. There had been several calls to do something about that monument. They knew in 2018 it was something that was going to happen. I said, “I would love to research this.”

BU Today: Tell us about your PhD research.

Ewa Matyczyk: My dissertation is about public art in Warsaw—from the ’70s to today. I track how art in public spaces has changed, and stayed the same, in this city, from late-socialism through the transition to democracy and global capitalism. I examine case studies of exhibitions, performances, monuments, and contemporary community-based initiatives. For me, the biggest overlap between the report for the city of Boston and my research lay in this issue of monuments, memorials, and commemoration in public spaces. In the communist and post-socialist context, monuments like those to Lenin or Marx were removed in 1989 as Eastern Bloc regimes collapsed. Images of these toppled statues—along with images of the Berlin Wall being torn down—are some of the most striking visualizations we have of that unique historical moment. The removal of monuments is something that happens, and has happened, all over the world and I’m really interested in the issues that arise through these processes: erasure, commemoration, and the rethinking, and sometimes omission, of histories. It’s interesting to look at how different places handle this process, and what is happening in the United States now with regard to not only Confederate monuments, but all manner of inaccurate and inflammatory pieces, is overdue and quite compelling.

BU Today: Talk about how all that informed your examination of Boston’s memorials, and the context of other cities tearing down Confederate statues.

Ewa Matyczyk: Those statues consolidate in tangible, physical form, emotions and personal histories and family histories. They become these lightning rods for a lot of pent-up anger, maybe misunderstanding; they serve as a concrete object onto which you can throw all this controversy, issues that have never been solved, lingering problems that were never addressed properly.

The statues we’re talking about—they’re not beautiful artworks, these aren’t groundbreaking pieces of sculpture. It’s not the art, it’s the ideas that people invest in them.

BU Today: What other recommendations did you make?

Ewa Matyczyk: Something I kept mentioning in my report is that I think these monuments and these debates are a great opportunity to commission some new exciting public artwork. I don’t have a piece in mind off the top of my head, but this is an opportunity for artists. It’s an incredible opportunity.