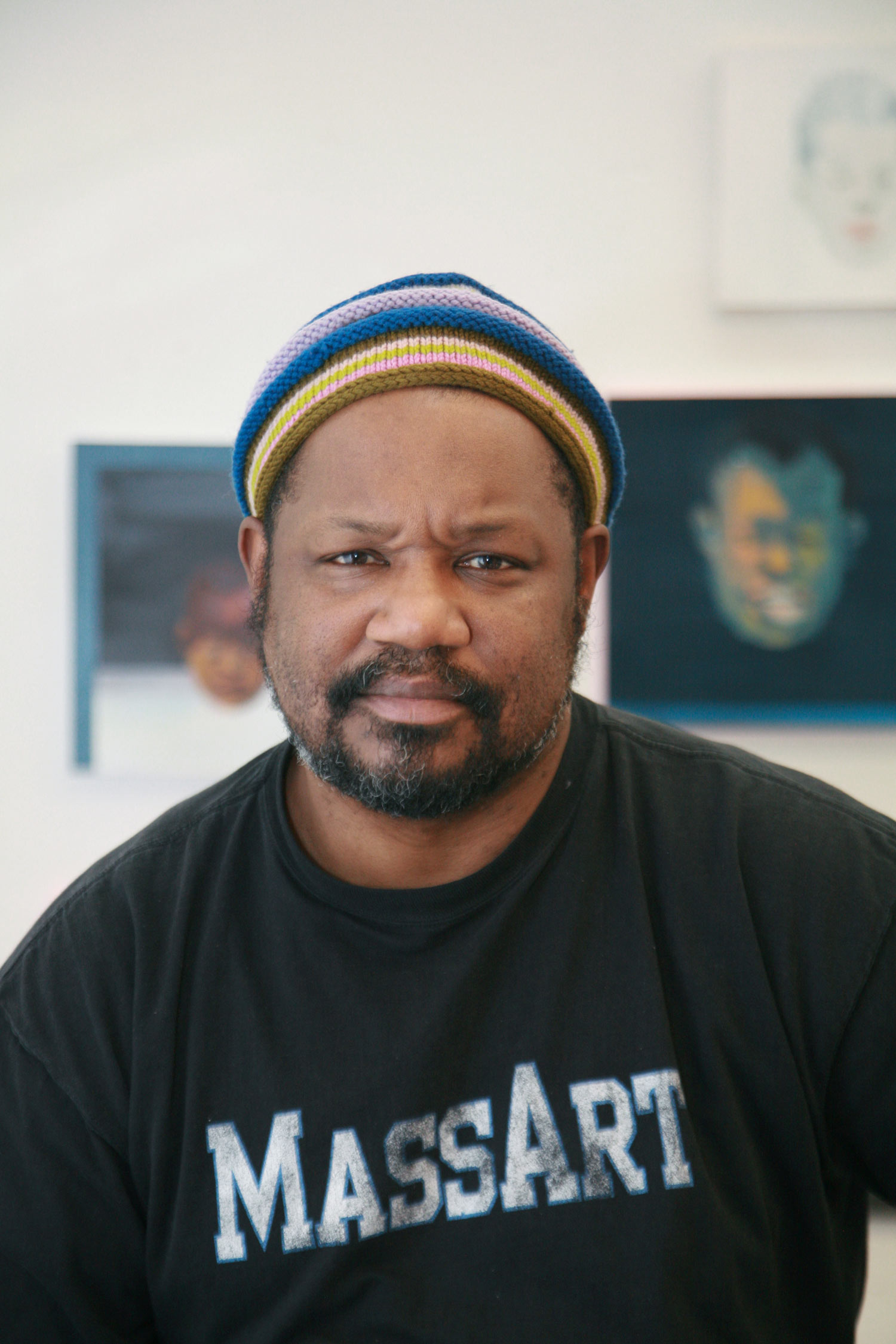 “I am over the moon about the fellowship,” says artist Steve Locke (Questrom’84). “It creates a lot of opportunity for me to really push forward in the work I love to do.” Photo by Joanna Eldredge Morrissey

Artist, known for explorations of maleness and race, is among 173 recipients

Artist Steve Locke was in the news in Boston last year because of a work of art that never happened. His proposed “living memorial to enslaved people” was a 10-by-16-foot bronze plate—the footprint of an auction block—to be set in the ground at the front of Faneuil Hall. But Locke withdrew the artwork after nearly two years of planning when it was opposed by the Boston branch of the NAACP. Rather than fight that battle, the artist decided to devote his energy to new artwork and a new professorship at New York’s Pratt Institute.

Now, thanks to a John Simon Guggenheim Memorial Foundation fellowship that Locke was awarded in April, his memorial will move toward installment somewhere, although perhaps not in Boston. “The work is very important to me,” says Locke (Questrom’84). “It has informed a whole new body of painting that is a kind of dialogue between modernism and Josef Albers and the history of enslavement.”

The son of an autoworker, Locke grew up in Detroit, Black and gay in a city whose cultural assets included Diego Rivera’s famous Detroit Industry Murals, painted in 1932 and 1933 on four enormous walls at the Detroit Institute of Arts. Young Locke was enchanted by the towering frescoes, and by many of the art museum’s paintings. “I knew that collection like the back of my hand,” he says.

When he arrived at BU at the age of 17, he says, he was eager to pursue a career in business, because “at the time there was something theatrical about business management, and there was that whole myth of the CEO.” Corporate aspirations took a sharp turn after Locke enrolled in a course in art history taught by Patricia Hills, now a College of Arts & Sciences professor emerita of American and African American art and a highly regarded teacher, scholar, and author. “That course changed my life,” he says. “She changed my life. I remember sitting in her class thinking, ‘You know, this is something I want to do.’”

Today, Hills sits at the top of Locke’s list of people who have influenced his art. Next up is Ida Applebroog, a New York–based painter whose sometimes cartoonlike work concerns the themes of gender and sexual identity. Then comes Jacob Lawrence, an African American artist and educator known for his portrayal of African American life, and the subject of much of Hills’ scholarship. (Locke recently wrote a catalogue essay for the Jacob Lawrence show that had been scheduled to open at the Metropolitan Museum of Art in June.) Josef Albers, a Bauhaus-schooled abstract expressionist who became one of America’s most influential art educators of the 20th century, is also high on the list of influencers. Albers’ appreciation of space, Locke says, inspired the format of his series called #Killers: dozens of portraits of white people who have killed Black people, with each white face rendered as a tiny graphite image on an empty expanse of white paper.

Such unsettling portraits, often reaching for new definitions of maleness and Blackness, have earned Locke several prestigious fellowships and more than 20 solo exhibitions.

He received an MFA in 2001 from the Massachusetts College of Art and Design and attended the Skowhegan School of Painting & Sculpture in 2002. He was an artist in residence at the Isabella Stewart Gardner Museum in 2016 and at Boston’s AIR, the city’s artist in residence program, in 2018. He is a former MacDowell Colony Fellow and has mounted solo projects with the Boston Public Library, the Isabella Stewart Gardner Museum, Mendes Wood DM in Sao Paulo, Brazil, at VOLTA 5 in Basel, Switzerland, and P.S. Satellites-A Project of Prospect IV in New Orleans. He was a visiting associate professor in painting at Yale in 2014.

Art in America has written that “Locke provides insight into his own challenges and disappointments in such titles as what becomes of the broken hearted? and nothing’s changed. Within the swirls of paint are echoes of the artist’s keen observational practices of looking, as well as of his being seen, wanted and rejected.” Art New England, describing you don’t deserve me, a freestanding painting displayed at the deCordova Sculpture Park and Museum in 2013, said what Locke’s work “suggests is that the turmoil of uncertainty has its own cunning beauty.”

The Guggenheim fellowship, Locke says, will allow him to return to his auction block installation, and to his #Killers series, a project whose scope Locke considers boundless.

Fellowships are awarded to individuals who have “demonstrated exceptional capacity for productive scholarship or exceptional creative ability in the arts,” according to the Guggenheim Memorial Foundation website.

“I am over the moon about the fellowship,” Locke says. “It creates a lot of opportunity for me to really push forward in the work I love to do. I still kind of can’t believe it has happened. It’s a terrific feeling to have my work affirmed in this way. And my sister is proud of me, so that is amazing.”

Locke is among this year’s 173 American and Canadian fellowship recipients, selected from almost 3,000 applicants. Since 1925, the Guggenheim Memorial Foundation has granted more than $375 million in fellowships to over 18,000 individuals, among whom are scores of Nobel laureates, poets laureate, members of various national academies, and winners of the Pulitzer Prize and National Book Award.

There are 2 comments on Alum Steve Locke Awarded Guggenheim Fellowship