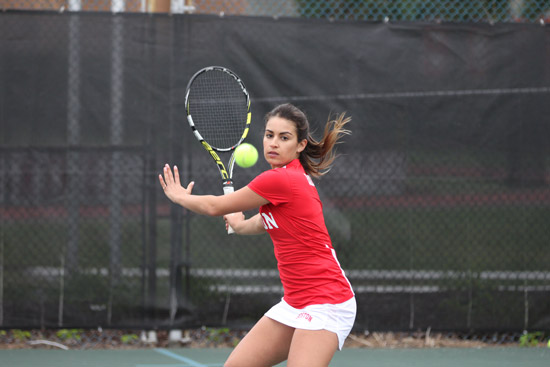 Senior Remi Ramos (Questrom) was the 2017 Patriot League Player of the Year. Photos by BU Athletics

As the only freshman on the BU women’s tennis team this season, Shelly Yaloz was assigned a daunting task: playing the third singles slot. But Yaloz (CGS) quickly proved up to the challenge, and after the season’s first three games, she was bumped up to the number-two slot, and for the final two games, she played the number-one position.

“Shelly has a winning record, and she was winning at number two,” head coach Lesley Sheehan says of the decision to advance her. “I felt that she was ready for the number-one position.”

Sheehan’s conviction turned out to be well founded. Facing Army’s Ana Joyner April 21, Yaloz lost the first set 6-7 before proceeding to defeat the 2018 Patriot League Player of the Year in back-to-back sets to claim the match.

The rest of the Terriers played their part, too. BU swept Army, 7-0, to complete the season undefeated in conference play. When the team faces Lafayette in the 2019 Patriot League women’s tennis tournament quarterfinals Friday at Bucknell, they’ll look to build on that strong play in hopes of capturing their fifth championship in six seasons. The team enters tournament play as the only unbeaten squad.

“They’re playing pretty confidently right now,” Sheehan says. “We want to be really sharp when we go into the tournament.”

This season has marked an impressive turnaround for the Terriers (12-8, 6-0, Patriot League), whose losing season last year was the first since the 2011-2012 season. Sheehan attributes the turnaround largely to the players’ competitiveness and intensity on the court.

“We’ve played a couple of really close matches,” she says. “There’s some mental toughness in there that they had to show. We played great against Army on Sunday. We had four three-set matches, and we won them all, and that’s the big thing. They were really playing all the way through that match hard and competitively.”

“I don’t remember the last time we beat them,” she says. (In fact, the last time the Terriers defeated the Big Green was during the 2010-2011 season.) “We all played really well, and it was a big upset, so having that makes you a lot more confident moving forward.”

As the Terriers enter tournament play, Ramos says that claiming the doubles point will be critical to achieving their ultimate goal of winning this year’s championship. While each singles match is worth a point, the three doubles matches are played for a single point. The key difference, however, is that the doubles begin each competition. “Once you get that one point, it sets the pace for the rest of the singles matches,” says Ramos.

To do that, the team must work together as a unit, which plays to the Terriers’ strength, Yaloz says.

The BU women’s tennis team competes against Lafayette in the Patriot League Women’s Tennis Tournament quarterfinals today, Friday, April 26, at 8:30 am, at Bucknell University’s Varsity Tennis Courts, behind the Gerhard Fieldhouse, 710 Moore Ave., Lewisburg, Pa. The semifinals are Saturday, April 27, at 10 am and the championship game is Sunday, April 28, at noon.