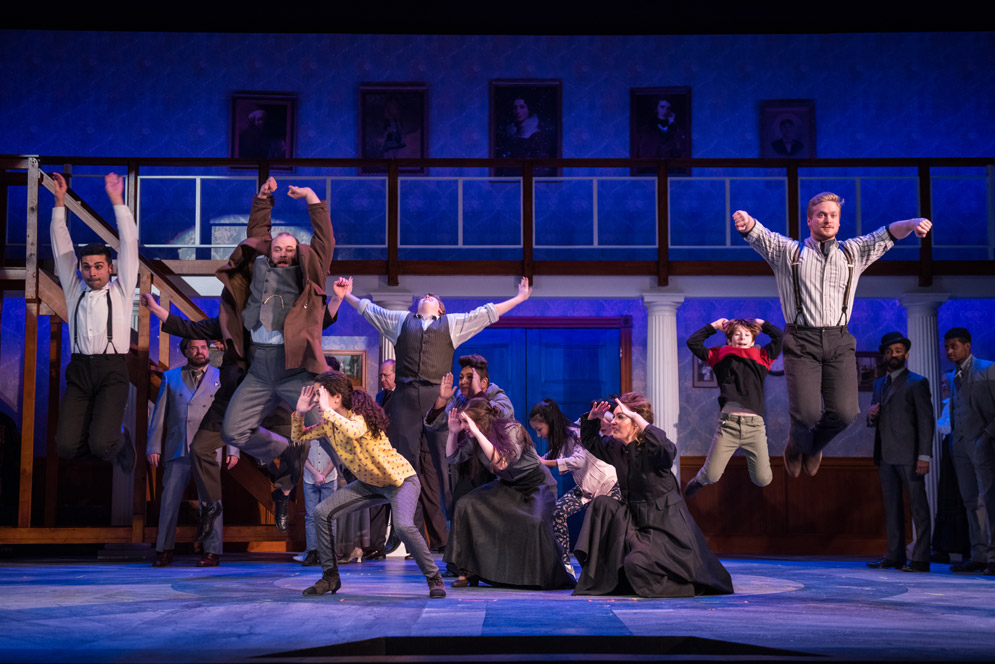 The cast of the Wheelock Family Theatre production of Ragtime performing the show’s opening number. The musical, based on the award-winning novel by E. L. Doctorow, runs through February 17.

At first glance, Ragtime might seem an unlikely choice for a family theater company to perform. A sweeping tale of early 20th-century America told through the eyes of three families of differing racial and socioeconomic backgrounds, the play blends fictional characters and real-life historical celebrities like Henry Ford, Booker T. Washington, Harry Houdini, Emma Goldman, and J. P. Morgan. It tackles tough issues like racial and social inequality and the plight of immigrants, topics that remain as much issues today as they were 100 years ago.

But the strong parallels between the storyline of the 1998 Tony-winning musical, based on the prizewinning E. L. Doctorow novel, and current headlines were one of the reasons the Wheelock Family Theatre (WFT) chose it for the 2018–2019 season.

“Wheelock Family Theatre has a long history of producing plays and musicals that may not seem typical stories for young people and their families to see, but in actuality are important for them to see. Ragtime is one of them,” says play director Nick Vargas, WFT associate artistic and education director. “We believe in providing our audiences with access to rich material that reflects our community and inspires dialogue with their peers, teachers, and families.” The musical is recommended for audiences 10 and older.

Ragtime offers a kind of kaleidoscopic view of American life at the turn of the 20th century, as experienced by a prosperous white family, a young African American couple, and an impoverished Jewish immigrant and his daughter, recently arrived from Eastern Europe.

“At our first rehearsal, I talked about how history is cyclical,” Vargas says. “Ragtime explores the inequalities and struggles of people in the United States at the beginning of the 20th century, and in 2019, the fight for equality and justice rages on. By producing Ragtime, we aim to be a small part of these much larger conversations and invite audiences to use the play as a jumping off point for their individual and collective responses.”

While the WFT production retains most of the original dialogue and music, the show has been slightly reconceived so that its events are seen through the eyes of the child characters. The play opens with a boy and girl playing in a library. They knock a book off a shelf—Doctorow’s Ragtime—and they imagine the characters coming to life from the page. Vargas says that by examining the intertwining storylines through the lens of young people, he hopes the play will resonate with them in a way it might not otherwise. 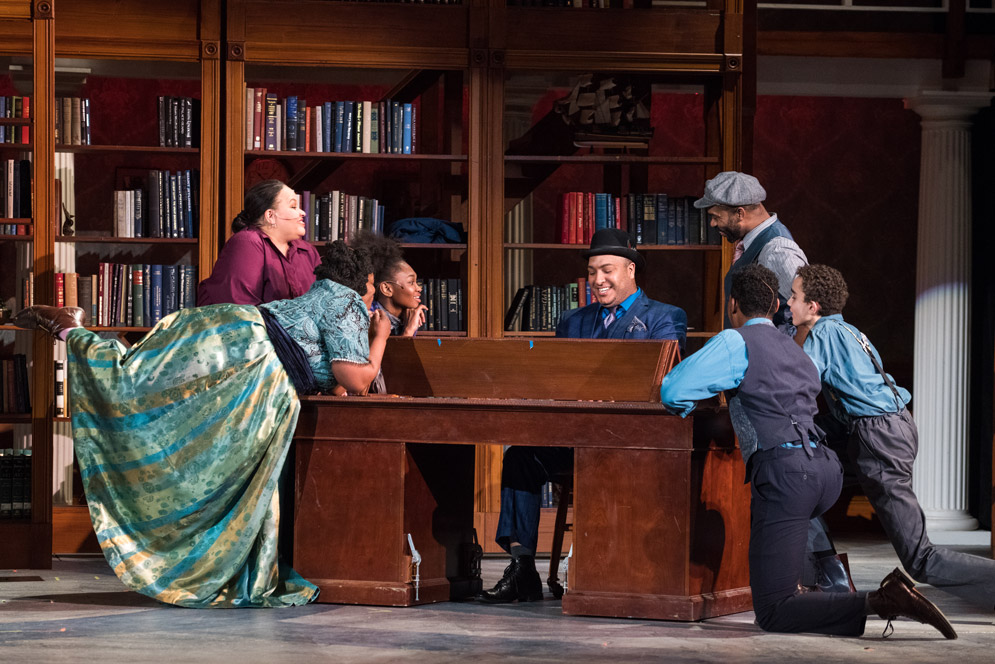 Anthony Pires, Jr. (at the piano) as Coalhouse Walker, Jr., performs “Gettin’ Ready Rag” with the cast of Ragtime.

“Our goal is to give younger audiences, who are in all likelihood experiencing Ragtime for the very first time, a greater opportunity to connect directly with the important issues and ideas the play presents,” he says.

Ben Choi-Harris, the 10-year-old actor who plays Little Boy, a sheltered child from an affluent family, and Marissa Simeqi, the 11-year-old playing Little Girl, a young immigrant who watches as her father struggles to make a living, say they’ve been struck by the play’s relevance.

“This play, although it takes place more than 100 years ago, it really relates to today,” says Choi-Harris. “What’s happening now, in terms of immigration and stuff, is very similar to what happened in the show. It’s still very hard for immigrants to come here and survive.”

Simeqi says her role “has made me more aware of how much America has worked to become what it is, and everyone’s input towards that….We’ve come a very, very long way, and everyone’s played a part in that.”

For other cast members, too, the parallels between the events told in Ragtime and today’s headlines are unmistakable.

BU Opera Institute graduate Tara Deieso (CFA’11,’17) plays Evelyn Nesbit, the real-life turn-of-the-century model and chorus girl who was raped by her benefactor, the prominent architect Stanford White, when she was just 15. Nesbit went on to become a tabloid celebrity when the man she later married murdered White in what was called “the crime of the century.” 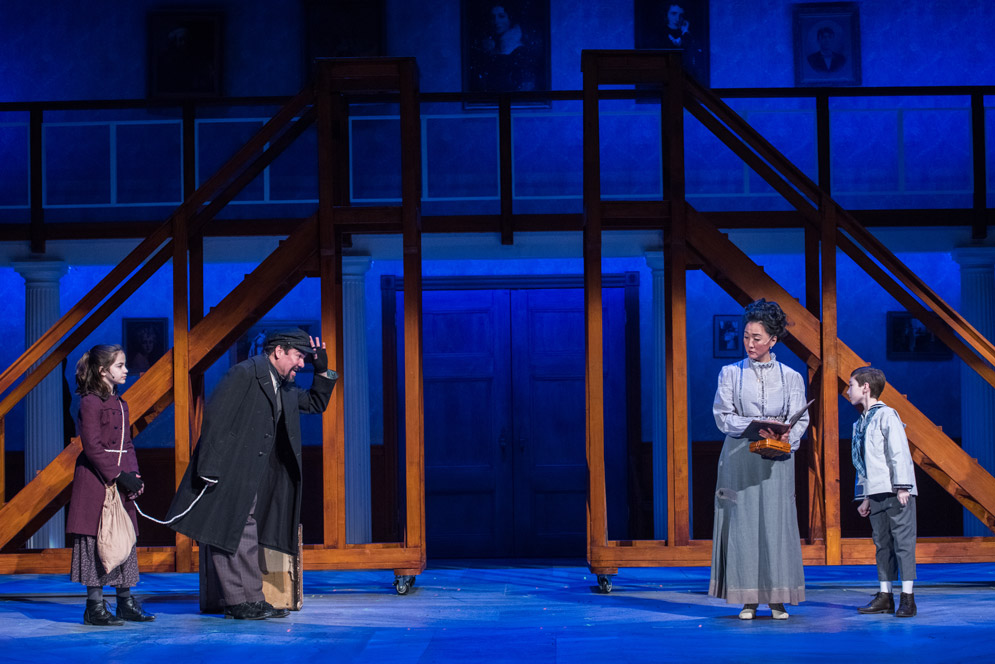 Deieso says she was struck by the similarities between her character’s plight and the #MeToo” movement. “When I started research and reading about her, it was devastating that this is still something that women are dealing with, where in order to get somewhere in our careers, whether it be on the stage or elsewhere, some women have to make sacrifices they shouldn’t have to,” she says. “It’s great that now the tide is changing, but I was like, wow, I’m playing this woman that went through this in 1902 and here we are and we’re still going through it.”

Deieso also plays an immigrant and a factory worker in the musical, and she says performing in Ragtime resonates with her personally: “My grandfather came from Naples when he was six years old, in 1912, to Ellis Island. So at the beginning of the show when the immigrants are literally going through the gates, it’s incredible to be able to tell his story.”

Two other members of the production have BU ties as well. The lighting designer is Aja Jackson (CFA’18) and the set design is by Lindsay Fuori (CFA’18), and like Deieso, both are working with WFT for the first time.

Fuori says that the biggest challenge for her was designing a set that could accommodate both big production numbers (the cast numbers 31) and more intimate scenes. “We had to create a space that can fluctuate to meet those demands and yet not feel empty when we get to those small, intimate scenes,” she says. To underscore the circular nature of history, she and Vargas chose to set the production where the story ends, in the J. Pierpont Morgan Library.

“It’s a place of significance, but it surprises us, and can transform throughout the show and become different things in ways the audience wouldn’t expect it to,” Fuori says.

Not only does Ragtime provide a vehicle for young audiences to engage in conversations about important topics like social inequality, but the play also addresses a common theme throughout Wheelock’s 2018-2019 season. 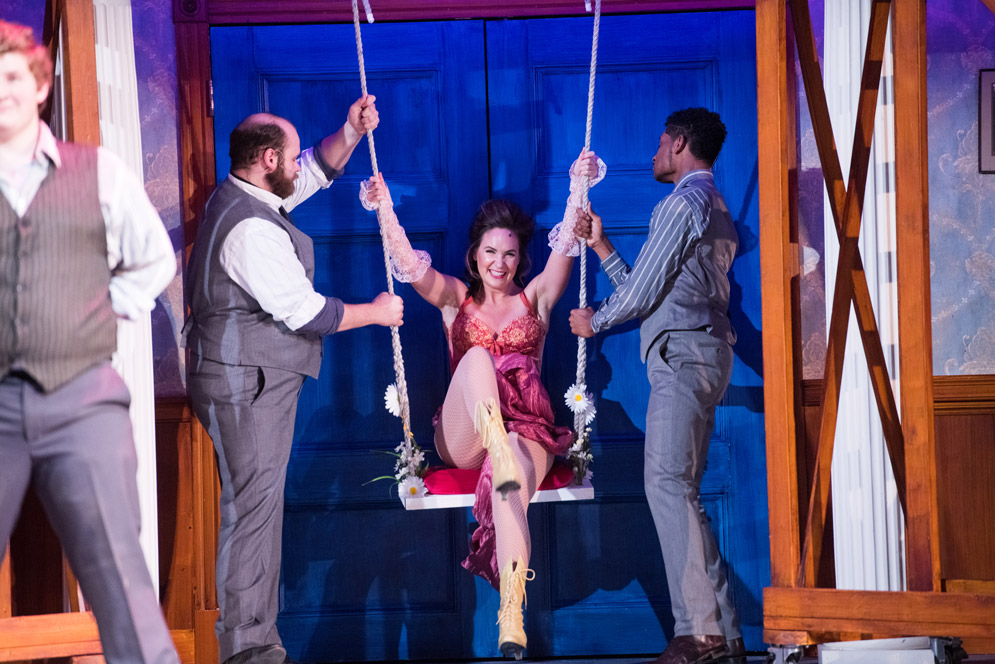 Tara Deieso (CFA’11,’17) plays real-life entertainer Evelyn Nesbit, known as “the Girl on the Swing,” who was caught up in a sensational murder trial. Here she performs “The Crime of the Century.”

“Our season is all about how telling your own story is a radical act, a force for change in the world,” says WFT artistic director Emily Ranii (CFA’13). “It’s all about individuals discovering their own voice.”

Ranii, an Opera Institute lecturer and academic program head of the BU Summer Theatre Institute, says that the first show of the season, Gooney Bird Greene and Her True Life Adventures, features a title character who “transforms her everyday life into extraordinary tales and teaches her second grade classmates to do the same. And in James and the Giant Peach [an adaptation of Roald Dahl’s children’s book that will close out the season], James embarks on an epic and fantastical quest for family and home and then tells his story again and again to all those who visit him in the peach pit. And then there is Ragtime’s Coalhouse Walker, Jr., whose song ‘Make Them Hear You,’ sums up the whole season.”