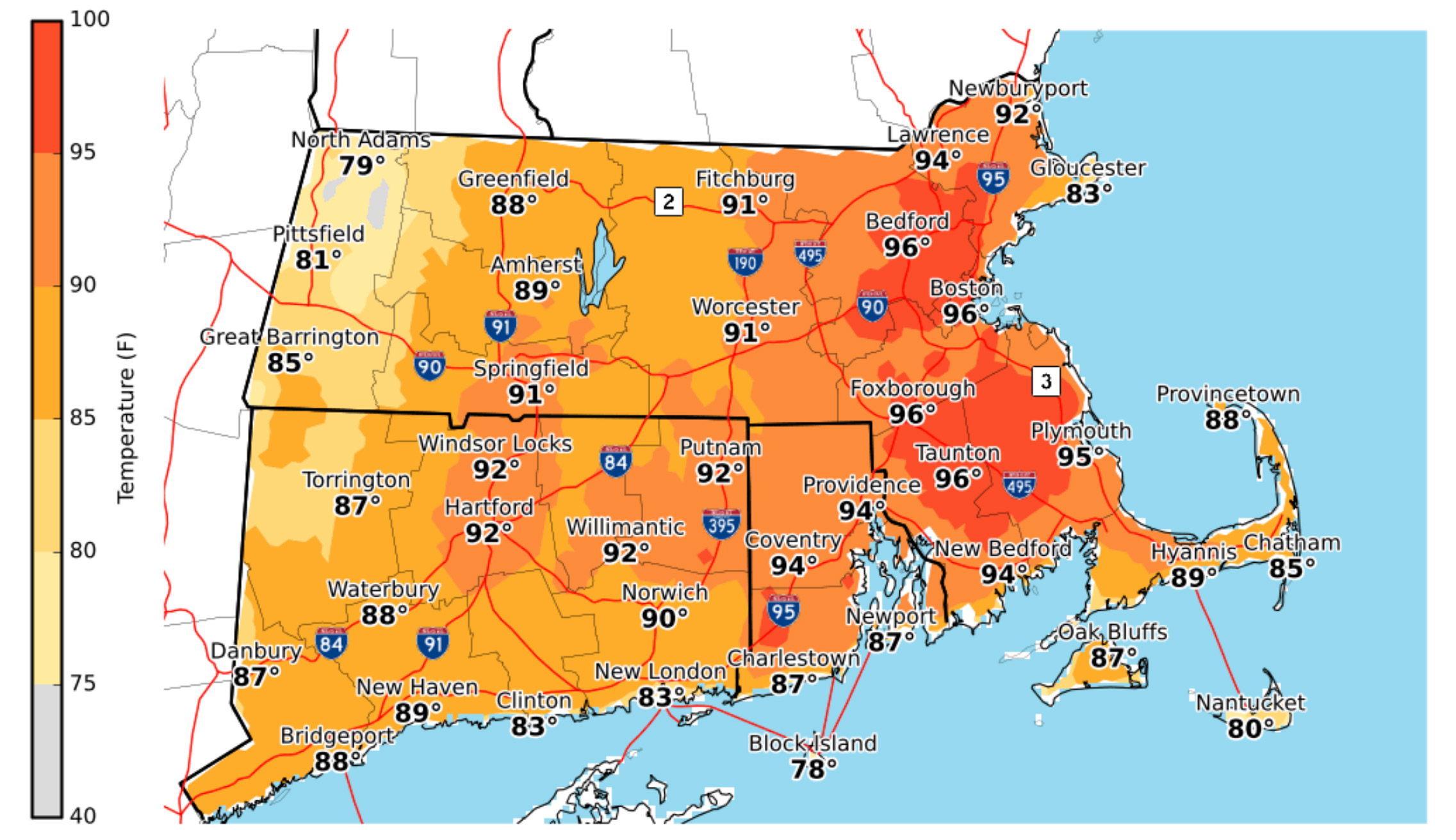 So many factors, and so little action, continues to add up to record temperatures

If July felt hot, that’s because it was hot. Hotter than ever, it turns out.

The month turned out to be the hottest on record dating back to 1872, when weather records for the city began. Portland, Maine, Manchester, N.H., and Hartford, Conn., also set heat records. The average temperature in Boston was 78.5 degrees for the month with 12 days surpassing 90 degrees. Of the 10 warmest months in Boston history, six of them have occurred in the last decade.

And it hasn’t exactly cooled off at night. Writing for WBUR, meteorologist David Epstein explained why: “The nights have been incredibly warm. Part of the reason the nights have been so tropical is due to something called the urban heat island effect. This keeps cities like Boston warmer than the surrounding countryside. All the concrete and other building materials radiate the heat absorbed during the day and keep cities warmer at night. Both daytime and nighttime temperatures have been on the rise over the past several decades, but the nights have been outpacing the rate of change, partially because of all the building that’s going on in Boston.”

With all that Northeast heat (not to mention that June was the warmest June for the entire planet and Europe has seen record heat this summer, as well), and all the talk about climate change, global warming, and the Paris Climate Agreement, we put several questions to someone at Boston University who spends a lot of time thinking about these issues: Cutler Cleveland, a College of Arts & Sciences professor of earth and environment and associate director at the BU Institute for Sustainable Energy.

BU Today: Can you explain the significance of these temperature increases?

Cleveland: The recent temperature increases are consistent with the measured temperature rise during the Industrial Era (especially since 1950), and the ongoing continued rise in greenhouse gas emissions. The ongoing temperature increases also are consistent with the conclusion by the Fourth National Climate Assessment (NC4A) that by 2035 New England will experience the largest increase in temperatures in the contiguous US. The NC4A also reported the Northeast has experienced some of the highest rates of sea level rise in the United States, and that exceptional increase relative to other regions is projected to continue through the end of the century. Given that Boston is a coastal city, I conclude that we should be very concerned.

A number of major New England cities will see July go down in the books as their warmest month on record, thanks to both an unusually steamy weather pattern and various effects of a shifting climate. Are there certain things you’d like to hear the 2020 Democratic presidential candidates, as well as President Trump, talk about changing?

President Trump is a lost cause in regards to any rational expectations—akin to discussing the spherical shape of the Earth at a meeting of the Flat Earth Society.

In regards to all the other candidates, here is what I would like to hear:

Is there anything a president can do to help impact this issue or is it bigger than that?

Some people see the numbers and have a hard time getting worked up about temperatures that are rising a half degree or one degree over a year.

We know from historical data from a wide range of sources that small changes in temperature translate into large differences in other aspects of climate (precipitation, humidity, snow and ice cover, frequency of severe weather). In turn, change in climate affects sea level, the availability of water, food production, the distribution of species, and many other services of nature that make the Earth habitable for human life.

For example, during the last glacial maximum (“ice age”) about 20–25,000 years ago, one-quarter of the Earth’s land surface was covered in ice. An ice sheet covered most of Canada, the Upper Midwest, and New England. Sea level was 125 meters lower than today. The global average temperature then was just 5 degrees C (9 degrees F) colder than today. Human activity, largely via the emission of GHGs, has already caused a 1 degree C increase in global average temperature in the Industrial Era (i.e., since about 1850).

There are 4 comments on July Was the Hottest Month Ever—Ever!—in Boston. Why?

July Was the Hottest Month Ever—Ever!—in Boston. Why?
4
share this