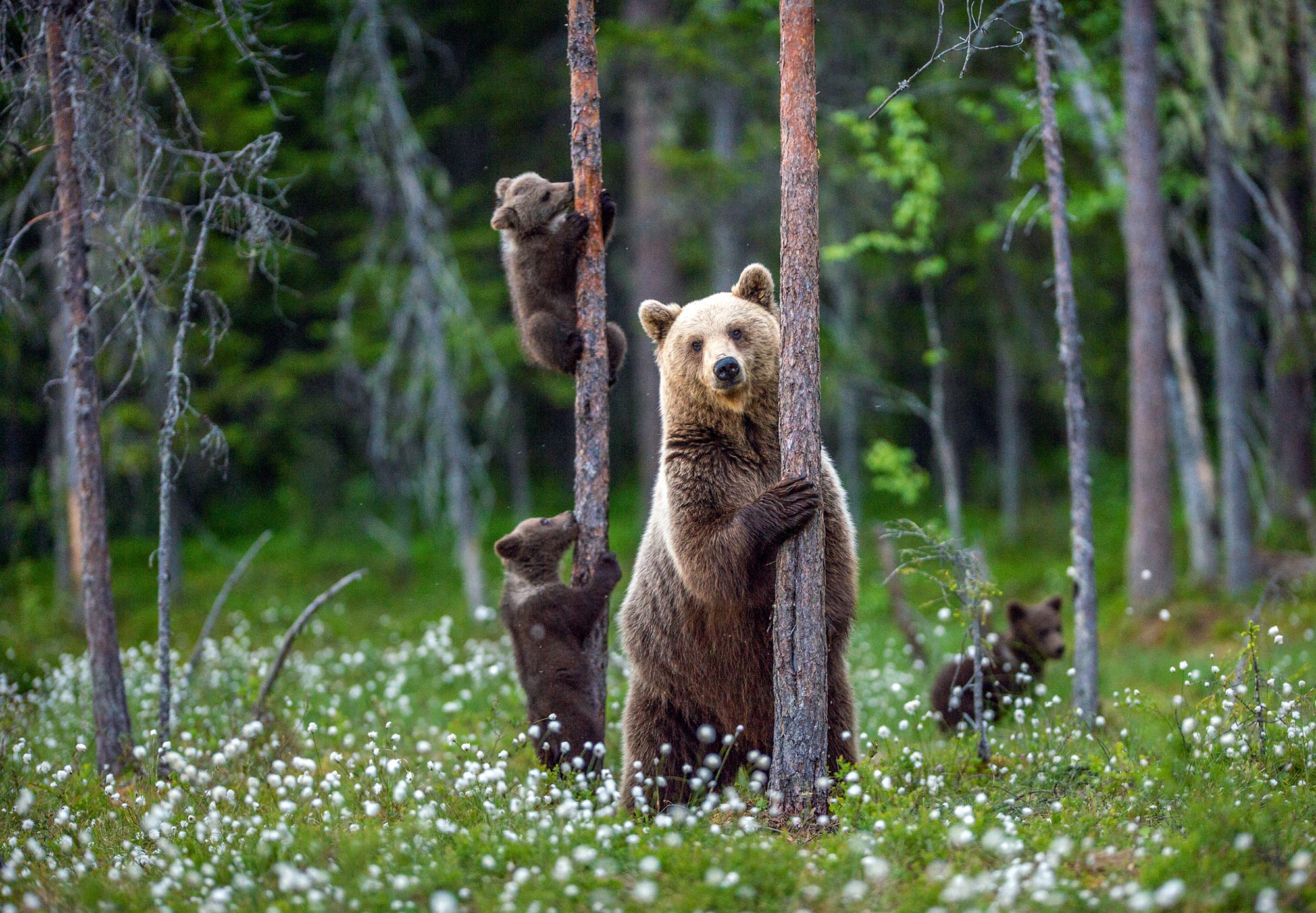 Grizzly bears are among the species credited with being saved from extinction by the Endangered Species Act. Photo by USO/iStock

If the Endangered Species Act Dies, What Animals Die with It?

The Trump administration announced sweeping changes in August to the nearly 50-year-old Endangered Species Act that scientists say will weaken how wildlife is protected, while at the same time making it easier for gas and oil drilling, as well as development, to be allowed in areas where certain protected species live.

Under the changes to the law, which was enacted under President Richard M. Nixon in 1973, a species can now be removed from the endangered list far more easily and be reclassified as “threatened,” the classification one step below endangered. Scientists have said that the humpback whale, the bald eagle, the peregrine falcon, and the Florida manatee are a few examples of animals that would no longer exist had they not been protected for the last half century.

BU Today asked three Boston University scientists for their reaction to the new rules. Those reactions ranged from disbelief to dread to nausea. Michael Dietze is a College of Arts & Sciences associate professor of earth and environment and a Frederick S. Pardee Center for the Study of the Longer-Range Future faculty research fellow. Cheryl Knott, a CAS associate professor of anthropology, specializes in orangutan and great ape behavior. And Les Kaufman, a CAS professor of biology, has special interests in marine life and evolutionary ecology.

BU Today: What was your initial gut reaction when you heard about the weakening of the Endangered Species Act?

Knott: My first reaction was shock, because this action is going in the direct opposite direction to where we should be headed. I study wild orangutans in Indonesia, a critically endangered species, and I know that other countries are influenced by the actions taken by the United States. Thus, this change in our own regulations signals to other countries that we are taking a step back from protection of endangered species, and that we prioritize corporate profits over protection of our natural world. I fear that this will give increased license to others to do the same. The United States should be a leader in safeguarding the world’s biodiversity—starting in our own backyard.

Dietze: Honestly, my initial reaction was dread—my gut felt like it’d dropped out from under me. The Endangered Species Act (ESA) is such a key part of US environmental legislation that its weakening is literally going to result in species being driven to extinction. And that’s not something to take lightly—extinction isn’t something you can recover from—once a species is gone, it’s gone forever, and as a planet we’ve lost a unique part of our world that has spent hundreds of millions of years evolving. As a recent United Nations report highlighted, we are in the midst of the next great extinction crisis, and unlike previous extinctions (the asteroid that killed the dinosaurs), this one is our doing. To have this decision be the US response to that global crisis is deeply disheartening and makes me embarrassed for our country. It’s also worth mentioning that the ESA has long had strong, and bipartisan, support from the citizens of this country (almost 90 percent of Americans overall, including three out of four conservatives), and its list of success stories is long and includes iconic species such as the bald eagle. This was an extremely bad and shortsighted decision.

Kaufman: My first reaction to the news was a wave of nausea, but my second was to wonder how it took the Trump administration so long to get around to this. I suspect that they were waiting to use this as a powerful distractor to drain energy from interests opposed to his reelection while also energizing his base. I rather suspect it is having the opposite effect, at least on his opponents.

Once a species is gone, it’s gone forever, and as a planet we’ve lost a unique part of our world.

For years, it has been argued that the act is outdated and needs an overhaul—yet it’s never happened. Do you believe it needed  to be changed?

Knott: The Endangered Species Act has been an incredibly effective tool that has brought many species back from the brink of extinction. As we enter an era of advancing global warming, we should be safeguarding the Endangered Species Act. It is particularly alarming that the new rules diminish protection for critical habitats and ignore the increased threat that comes with global warming. Animals cannot survive in a vacuum, and without these endangered habitats, endangered species will disappear. As the Earth’s climate changes, more habitats will become endangered, which will increase the number of species that need protection. The Endangered Species Act is our mechanism for ensuring that we can respond to the increasing threat that global warming brings to animals and their habitats.

Dietze: No legislation is perfect, and there are undoubtedly things about the ESA that could be updated based upon years of experience and advances in the underlying science. But that’s not what we’re seeing here. The current administration has consistently acted with disdain for science, and counter to the best available data, on issue after issue. This is an administration that didn’t even fill the office of Science Advisor for two years. This is an administration that has dismissed whole fields of science as Chinese conspiracies. The current attack on the ESA is simply that, an attack, not an overhaul. And it’s an extremely shortsighted attack, exchanging eons of our country’s natural heritage for short-term economic gains at a time when the economy is already strong, and very much to benefit the fossil fuel industry at a time when we know that industry is destroying the planet and increasingly doesn’t even make economic sense to continue. For example, new solar and wind are now cheaper than coal and competitive with oil and gas.

Kaufman: The ESA does not require any kind of major overhaul. All it needs is to evolve in its implementation in response to a changing world, and it has already proven itself as a flexible, adaptive, and effective legislative instrument.

We should also remember that the same forces that destroy animal habitat also threaten humans.

Is there one animal or species you are particularly focused on or whose well-being you are concerned about in light of these changes?

Knott: I think part of the point of the Endangered Species Act is to protect all species, not just those that are well known or charismatic. Many species have very narrow habitat requirements, and with diminished protection of these habitats, we will be dooming them to extinction. We should also remember that the same forces that destroy animal habitat also threaten humans. If we slacken the protection of our own land, water, and air, we also endanger human health.

Dietze: This is not an issue restricted to individual species. As the UN report makes clear, there’s an estimated one million species threatened with extinction. If we look at all the plants and noninsect animals on the planet, it’s estimated that one in four species—a quarter of the world’s biodiversity—is threatened by human activity. If you focus on one or two species, even if those species have high cultural value, it’s easy to dismiss those examples as not being relevant to your personal life. Polar bears in the Arctic are iconic, but the Arctic is too abstract and far away for many Americans. This is an issue that affects all of us, regardless of where we live. History has also taught us that it’s not only rare species that are threatened—species that were once remarkably common, abundant, and everyday have been driven to extinction, such as passenger pigeons, or to the brink, like the American chestnut.

Kaufman: I am most concerned about the little things—the small, the inconspicuous, and the dull-colored, and all those incapable of defending themselves or otherwise potentially dangerous to careless people. These are the nuts and bolts of the living world—however inconvenient, unpleasant, or seemingly purposeless they may be to the ignorant, these are the rank and file nuts and bolts of the biosphere and we cannot arbitrarily eliminate them without endangering ourselves.

If the Endangered Species Act Dies, What Animals Die with It?

There are 2 comments on If the Endangered Species Act Dies, What Animals Die with It?

If the Endangered Species Act Dies, What Animals Die with It?
2
share this