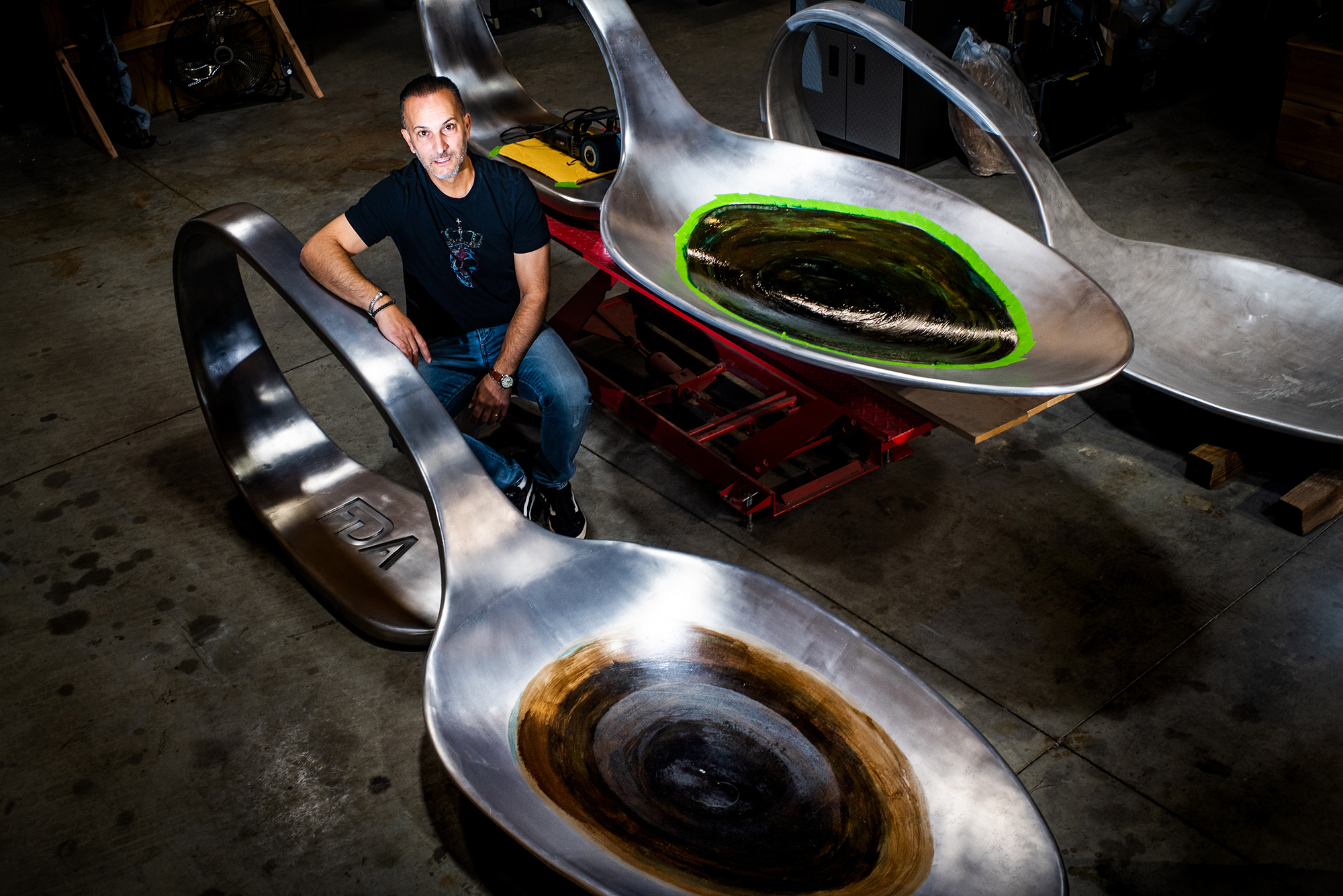 Domenic Esposito, here in his Westwood, Mass., studio, began sculpting his giant spoons because he was upset over the toll his brother’s drug addiction had taken on their whole family and angry about the profit motive that has led to the nation’s opioid crisis. Photo by Jackie Ricciardi

One of four pieces drawing attention to the opioid epidemic

Artist and activist Domenic Esposito had become sad and frustrated over his brother’s opioid drug addiction and angry about the profit motive that has led to the nation’s opioid crisis. In response, two years ago he began sculpting a series of giant versions of the burnt spoon in many addicts’ toolkit to bring awareness to the epidemic and hold those pharmaceutical companies manufacturing the drugs accountable. The four sculptures were displayed in provocative locations, including outside drug companies associated with the crisis, sparking conversation and sometimes outrage along the way.

Now one of the four sculptures, FDA Spoon—originally installed outside the Food  and Drug Administration headquarters in Washington, D.C.—can be seen outside the George Sherman Union starting today. The installation, on view through October 24, is hosted by the BU Arts Initiative, the College of Arts & Sciences history of art and architecture department, and BU Art Galleries.

Esposito says he’s determined to see that the pharmaceutical companies that drove vast overconsumption of pain pills like OxyContin bear responsibility for the users who became addicted and often turned to heroin. And he wants to keep more people from being drawn into the crisis. He recently founded the nonprofit Opioid Spoon Project to promote recovery for the addicted—and demand accountability for the crisis.

“A big part of our mission is reaching people outside the recovery community,” he says.

Addicts use a spoon to heat heroin powder or crumbled-up pills with water, holding it over a match or lighter to create an injectable liquid. Why sculpt a spoon and not a needle?

“First, it’s the symbolism behind a tool that is supposed to feed us and nourish us,” says Esposito from his studio in Westwood, Mass. “Second, it is a clear sign that something is wrong when a drawer is missing spoons. I have heard this said by so many parents. Third, the spoon can be used for all opioids, including oxys and so many other drugs. The fact is that 80 percent of heroin users start on a synthetic opioid.”

The installation at BU marks the first time any of Esposito’s works have been shown on a college campus, and the artist says his goals are to create awareness and understanding of the epidemic—“addiction is a disease, not a weakness”—to educate students about the risks of opioid medication prescribed or used improperly so more of them don’t fall victim, to incite protest against the role of big business and regulators in an epidemic that has taken half a million lives, and to convince more people to get involved.

OxyContin manufacturer Purdue Pharma declared bankruptcy in September, faced with more than 2,000 state and federal lawsuits stemming from its role in the crisis. Esposito dropped his first spoon in front of the Connecticut headquarters of Purdue Pharma in June 2018.

“I had kind of an epiphany about a year before,” he says. “I spoke at an event at my local parish about what my family was going through and the recovery services the archdiocese offers. You know, it’s a Sunday morning, everyone’s sort of half asleep, then at the end, you do the coffee and donuts. And I got approached by all these families, people saying my son or my daughter or my granddaughter is in a similar situation—I’m glad you opened up. So many people had the same story. There’s this sense of hopelessness. I was already doing a lot of art, so I thought, why don’t I make a huge statement with this spoon. Guerilla art, sort of.”

The Purdue Spoon drop drew a lot of attention—from the police, who impounded the sculpture for more than two months, and from the media. Esposito also had to demand a retraction when a Connecticut newspaper wrote that Purdue Spoon had actual heroin residue on it. Now his work has grown to include the Opioid Spoon Project.

Highlighting art and activism on campus

“I am thrilled to support and help facilitate this installation at BU, to explore the multiple intersections of art, activism, public art, and social change,” says Ty Furman, managing director of the BU Arts Initiative. “It is also exciting to utilize our campus as an exhibition space in this way, something we hope to do more of in the future.”

Last November, Gregory Williams, a CAS associate professor of history of art and architecture, was giving a talk at the Museum of Fine Arts on art and activism. Esposito, who was in the audience, raised his hand and asked if he had heard of the Opioid Spoon Project. Williams, a member of the BU Arts Council public art committee, had heard about it and arranged to meet Esposito for coffee. That led to a plan that would give Williams a chance to highlight art and activism on campus and provide Esponsito with a new front for education and consciousness-raising.

“We have the opportunity to create a conversation around the opioid crisis and also start talking about the formal questions,” Williams says. “We can talk about the play between beauty and trauma, formalism and narrative, realism and abstraction.”

Despite its fraught associations, FDA Spoon, skillfully cast by Esposito, Williams notes, is visually appealing. The original Purdue Spoon was made of steel and required many hours of grinding and polishing by hand. The other three were made in sections of solid cast aluminum and welded together, overall a less grueling effort. Each weighs nearly 800 pounds and is close to 10 feet long. The burnt puddle of residue in the bowl of the Purdue Spoon was created with a chemical process, while the others were made using coats of pigment and shellac.

The Opioid Spoon Project hosted a one-day conference on the epidemic in Boston last January, and since then Esposito has been touring with the Memorial Honor Spoon, a specially created sculpture that commemorates those who have lost their lives to opioid addiction. Following talks or panel discussions at each stop, individuals are invited to sign the spoon in memory of loved ones lost to addiction.

“It’s really emotional—they’re shaking as they sign this thing,” Esposito says, his voice catching. “I didn’t appreciate how difficult it was going to be.”

BU is hosting a series of public events around the visit of FDA Spoon, which began with an appearance by Esposito at a BU Week of Wellbeing event October 8 at the BUild Lab. Additional events:

The BU Collegiate Recovery Program connects students in recovery from substance use and provides a support network for wellness and long-term recovery. BU students in recovery can email recovery@bu.edu to learn more. If you are a BU student questioning your substance use, Behavioral Medicine offers free confidential counseling and is available 24/7 for emergencies. Call 617-353-3569 for a fast and free appointment. Find additional resources here and here.