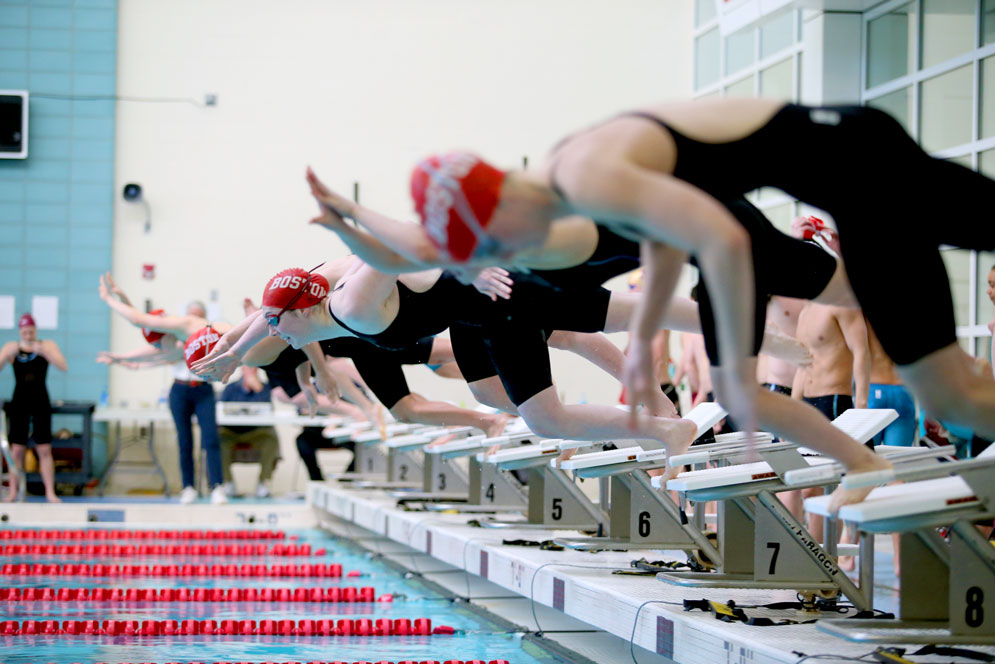 Senior swimmer Erin Nabney (COM) set a school record in 200 IM against Boston College this season with a time of 2:01.85. Photos by BU Athletics

The BU swimming and diving teams’ dual season culminated at the end of January in a wire-to-wire battle against Boston College: a 148.5-142.5 win for the men and a 152-148 win for the women. The narrow victory was the result of significant individual efforts, including a school record in the 200 IM by senior swimmer Erin Nabney (COM), with a time of 2:01.85.

The Terriers’ performance against the Eagles was typical of the drive that’s propelled both teams all season, members say. “That kind of encapsulated our team as a whole: being the best we can be under pressure and taking those last few races and giving it our all,” says senior Allison Winter (ENG).

Starting Wednesday, the BU swimmers and divers will look to continue that level of effort when the men’s and women’s teams begin competition in the 2019 Patriot League Championship.

“The morale on the team right now is better than I’ve known it in the four years I’ve been on the team,” Nabney says. “Everyone believes in themselves, and everyone’s confident, fired up, and ready to go.”

With the competition regularly dominated by Navy, finishing at the top isn’t necessarily the goal—but finishing in the top three is. “That’s gonna be a tall task,” acknowledges Bill Smyth, head coach of both teams, “but certainly one of the big things we’d like to do.”

The men finished the dual season with an 8-1 record. And although the women went 5-6 in the same period, with their first-place finish in the Terrier Invitational and a strong ending against Boston College, they are positioned, along with the men, for success.

“We can get definitely get second place with the team we have right now,” Winter says.

In addition to a strong finish, Smyth says, he’s optimistic that this year’s Patriot League Championship could produce a few more school records. Among possible candidates on the women’s team are junior swimmer Carly Soares (CFA), who was selected to the 2018 All-Patriot League First Team and set the school record in the 200 breast last season, Nabney, a two-time First Teamer, senior Julimar Avila (CAS), and sophomore Sydney Lee (CAS).

On the men’s side, two-time First Teamer senior Trevor Winans (CAS), junior Tommy Hagerty (COM), and sophomore Stuart Vickery (CAS) have the potential to break school records, according to the coach.

Senior diver Cameron Schoffstall (Questrom) hopes to fulfill a longtime goal: scoring 300. He’s come close several times in his career, including a 299.92 against BC last month.

“I’ve got up to four more tries left in my career, and I’d really like to crack 300,” Schoffstall says.

He will have two attempts during the prelims, and should he advance to the championship stage, two more shots at achieving his ambition. With this week’s championship likely to be one of his last times stepping on the board before judges, he admits to feeling the pressure.

It’s a sentiment shared by fellow senior Nabney, who has swum competitively since she was eight. “Knowing that it’s my last one has spurred me on to get the most I can out of both training and competing,” she says.

As the competition begins, Smyth is pushing out the same message to his athletes that he has in years past: “Be undeniable,” the coach tells them. “Whatever you set out to do, you don’t see any obstacles. You’re undeniable when it comes to your pursuit of excellence. So, no matter what happens to you—success or failure—it’s all short-term, and we just get on to the next thing.”