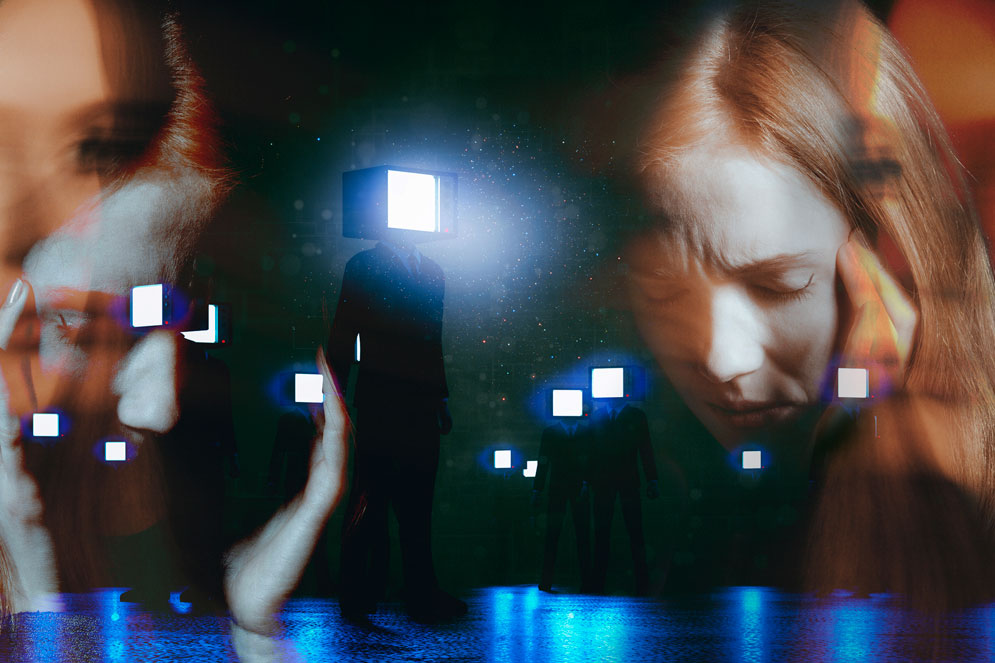 BU communications and emerging media researchers found that the more hours people spent watching the most popular binge-watched online shows, the more likely it was that viewers saw the world as a mean and scary place. Design by Gabriella Ketema; photos by KatarzynaBialasiewicz/iStock, gremlin/iStock

Do you view the world as overall nice or mean? Before you answer that question, you might want to tally up how much time you’ve spent binge-watching online shows lately.

Online platforms like Netflix, Hulu, and Amazon Prime have transformed the way we watch television shows—instead of waiting for a new episode to come out once a week, viewers can now watch their favorite series whenever and wherever it’s convenient. It’s not uncommon for people to binge-watch popular shows, sometimes consuming an entire season (or even multiple seasons) in one sitting. Binge-watching has been defined as watching three or more episodes of a TV show in one sitting.

But some of the most popular online series portray violence in ways that don’t accurately reflect what’s going on in real life. So does watching these shows have an effect on the way we perceive the world, even after we’ve stepped away from the computer or TV screen?

That’s one of the questions BU College of Communication (COM) researchers Sarah Krongard and Mina Tsay-Vogel answered in a recent study. In December 2018, the pair published a paper in Psychology of Popular Media Culture examining whether people who view the most popular binge-watched shows see the world as meaner than it really is—a phenomenon known as “mean world syndrome.” This idea stems from a long-standing theory called “cultivation,” which proposes that watching television leads people to believe the real world is closely aligned to what they see on their screen.

“Our hypothesis was that people who are more likely to watch these commonly binge-watched programs—so, heavier viewing of these programs—would be more likely to report stronger mean world perceptions,” says study senior author Tsay-Vogel, a COM associate professor of communication and codirector of BU’s Communication Research Center.

These same patterns, the duo hypothesized, would also be negatively related to “kind world perception”—as Tsay-Vogel explains it, these binge-watchers “would be more likely to think people are not altruistic and not as helpful and not as honest.”

During the fall of 2015, Krongard and Tsay-Vogel looked at the five most commonly binge-watched online TV series—all of which were Netflix original shows: House of Cards, Unbreakable Kimmy Schmidt, Marco Polo, Bloodline, and Daredevil.

Next, the researchers and a group of COM students catalogued the instances of violence in each show, including frequency, nature, justification, and perpetrator and target characteristics. They found violence in the top-streamed shows was very prevalent, graphic, and intentional. Perpetrators and targets of violence also aligned with race and gender stereotypes previously documented in traditional broadcast TV shows.

“In particular, white perpetrators tended to be the ones who were morally justified in their behavior,” says Krongard, a graduate researcher working on a PhD in emerging media studies. “Nonwhite perpetrators did not have that privilege.”

To see what effects, if any, watching these shows had on frequent viewers, the researchers surveyed 366 COM undergraduate students who participated in the study for course credit. The students were asked questions to assess their TV watching habits and their perceptions of society—for example, choosing a number between 1 (strongly disagree) and 7 (strongly agree) in response to statements like “Most people would try to take advantage of me if they get a chance”; “Most of the time, people are just looking out for themselves”; “Most people are kindhearted”; and “Most people are honest.”

When they examined the survey results, Krongard and Tsay-Vogel found that the more hours spent watching these online original series, the more likely it was that the viewer saw the world as a mean and scary place.

Krongard and Tsay-Vogel acknowledge that their research was limited by self-reported data that may not reflect the actual exposure to the media. In addition, correlation does not mean causation. Future studies, they say, would have to be longitudinal so they could watch for changes in TV viewing, TV content, and real-world perceptions over time.

“It might be that people who are already viewing the world as a fearful, scary place are drawn to these types of programs,” says Krongard.

What advice do Tsay-Vogel and Krongard have for people who think their binge-watching habits might be influencing their worldview? They both agree that awareness is a good first step. See if watching something else causes you to view the world in a different way, suggests Krongard.

“Try to engage critically with what you’re watching. Try to think about: Who made this? Why? What is the purpose?” she says.

Does Binge-Watching Netflix Warp Your View of the World?

There are 2 comments on Does Binge-Watching Netflix Warp Your View of the World?

Does Binge-Watching Netflix Warp Your View of the World?
2
share this