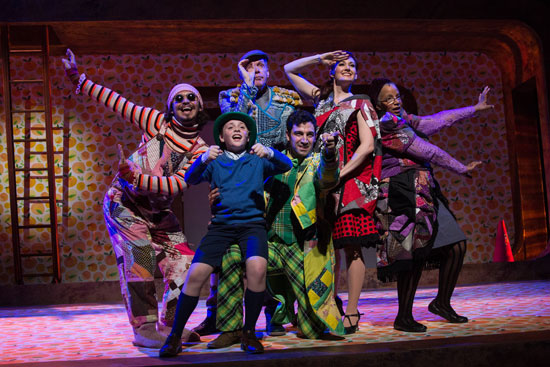 Ricky Holguin as Earthworm (from left), Cameron Levesque as James, Russell Garrett as Centipede, Jared Troilo as Grasshopper, Aimee Doherty as Ladybug, and Cheryl D. Singleton as Spider in the Wheelock Family Theatre production of James and the Giant Peach. Photos by Paul Fox Design

Brendan O’Brien does not like peaches. Cameron Levesque doesn’t mind the fruit, although “they’re not my favorite.”

That’s one key difference between the actors alternating in the lead role in Wheelock Family Theatre’s James and the Giant Peach, which opens tonight, Friday, April 12, and runs through May 12.

“I hate them with a passion,” Brendan says, making a face. “Ever since I first had a peach, after the first time I saw James and the Giant Peach when I was in first grade.”

If you’re going to the musical, WFT’s final production of the 2018-2019 season, it’s also worth knowing that these sixth graders are, by their own description, buddies, stage veterans who’ve shared a role once before: in the Huntington Theatre Company’s Merrily We Roll Along back in 2017. Since then, Brendan has been to see Cameron in Fun Home at SpeakEasy Stage Company, and Cameron returned the favor when Brendan was in Commonwealth Shakespeare Company’s Richard III.

“I like school, but I’m a theater kid at heart, and I’d rather just be at the theater all day every day,” says 12-year-old Cameron.

“Legit!” says Brendan, who’s a year younger. “I, like, count down the hours when I’m in school.”

James and the Giant Peach is a story about an orphan who goes on a quest for family and home and finds them in the company of five oversized insects. The lesson, says Brendan, is that “family doesn’t have to be biological. It can be wherever you find it. I love my family, but I have a theater family too. Cam’s my brother—my twin brother.”

“The whole arc of the show is James finding his family, and at the end of it he realizes what Brendan just said,” Cameron says. “Your family can be anywhere, it can be anyone. When James meets these insects, he realizes, they care for me and they love me, and I love them back.”

Cameron has a history with Dahl, more so than Brendan. He played James once before in a community theater a few years ago. “I think all the songs are beautiful and the show is so magical,” he says. Matilda, based on another Dahl book, was the first Broadway musical he ever saw, and in third grade he played the author in a living history project.

Ask the two young actors what the best part of playing James is, and you get different answers.

For Brendan, it’s the chance to perform the “Plump and Juicy” number: “I love big dance numbers, I love dance breaks, I love the whole thing. I love singing and dancing and acting it too—it’s so much fun.”

“I’ve never had a big singing, belt-it-out song,” says Cameron, “so ‘Middle of a Moment’ toward the end of act one, when I get to belt it every night it’s like, oh, wow, I can’t believe I just did that. It’s so fun to do it, but at the same time it’s so nerve-wracking.”

The two young actors are “different and equally amazing,” Ranii says. “They’re both supersmart. There were a couple of moments yesterday when we were rehearsing ‘Middle of a Moment,’ with both on stage at the same time, and both of them had great ideas for what the staging could be. Cameron said to me at one point, ‘I feel like I need to cross here.’ It’s like rehearsing with adults. They’re playing and collaborating with you.”

“It’s fun. I’ve never played an insect,” says Broadway veteran Garrett, who has played the Mad Hatter in Alice and Uncle Archibald in The Secret Garden, two previous WFT productions. “I’m a centipede. Centipedes are kind of icky, they wind back and forth, and they’ve got lots of legs.”

“I’ve played a dinosaur and a duck and Bart Simpson and a couple of other strange things,” says two-time Elliot Norton Award winner Doherty, another WFT veteran, “but this is a first.”

“In rehearsal the other day, Emily was talking to us about trying to add in another layer of physicality that conveyed what we used to be,” Garrett says. “And I had fun with that, and then we got costumes and suddenly I felt completely encased in my costume, so it became less easy to find that layer. I’d like to see if I can get back to that.”

“I am kind of lucky, in that ladybugs don’t move in any particular kind of way, except they fly, which I’ve tried a couple of times and can’t seem to make work,” says Doherty with a smile.

The role of James doesn’t offer the challenge of an insect costume, but “it’s an incredible part, all the songs and the emotional range you have to go through for this part,” says Cameron. “It’s so fulfilling after you finish a show.”

James and the Giant Peach runs through May 12 at Wheelock Family Theatre, 180 The Riverway, Boston. Performances are Fridays at 7:30 pm and Saturdays and Sundays at 2 pm. Purchase tickets, $20 to $40, at 617-353-3001 or online here. Student and group discounts are available and special 1 pm performances run during school vacation week (April 16 to 19). Note: no evening performance on Friday, April 19. ASL and AD performances are May 5 at 2 pm and May 10 at 7:30 pm.

At Wheelock Family Theatre, the Leading Men Are Sixth Graders

There are 2 comments on At Wheelock Family Theatre, the Leading Men Are Sixth Graders

At Wheelock Family Theatre, the Leading Men Are Sixth Graders
2
share this