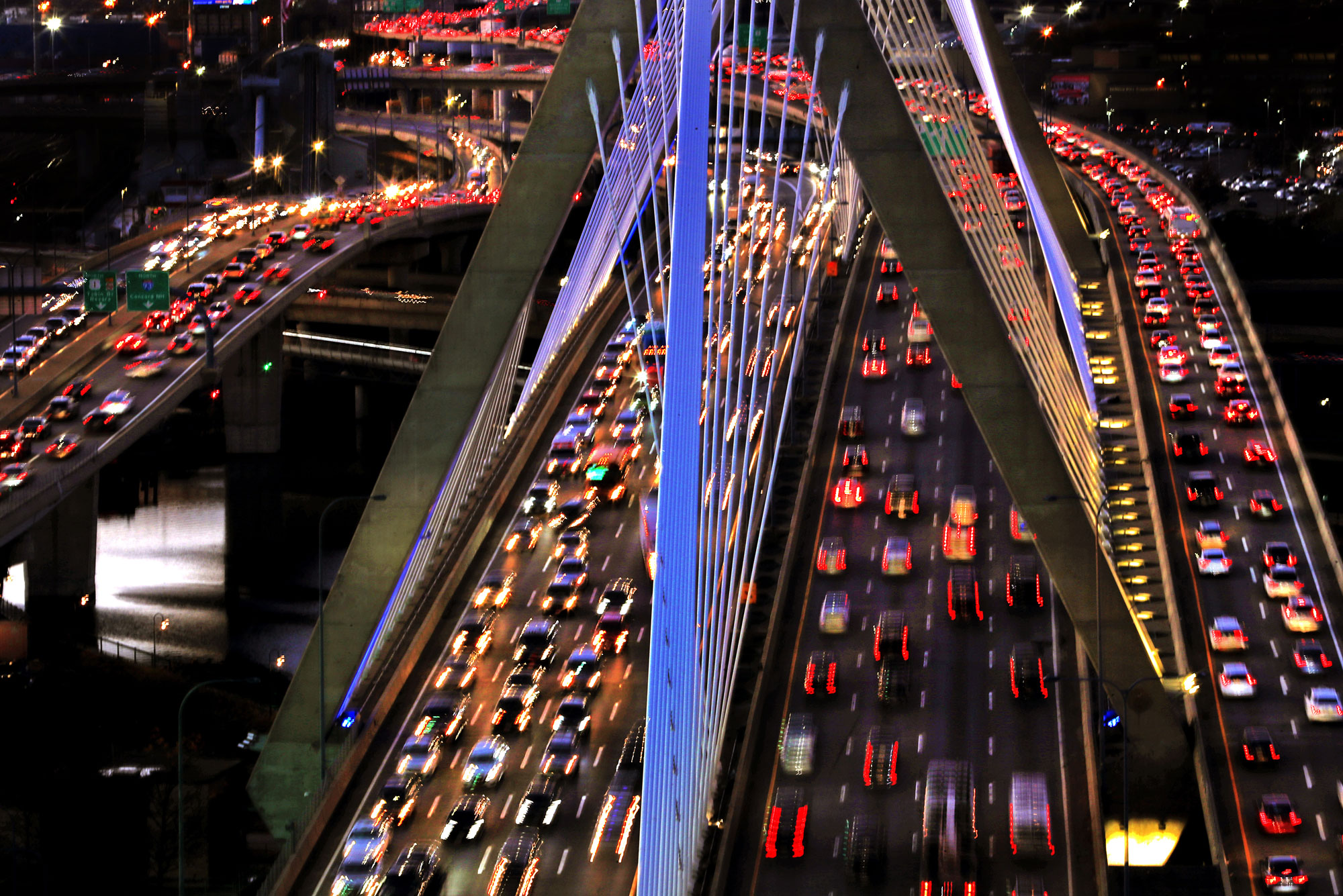 The Boston Globe’s Spotlight investigative team published an impressive series of stories in November about a subject that impacts anybody and everybody who lives in Greater Boston: traffic. The series is called “Seeing Red.”

The stories cover the city’s roads and rails, both vital to the Boston University community, but it focused more on the roads. Reporters unearthed some fascinating numbers, among them: in the past five years, 59,000 more people are driving to work alone in Greater Boston. On one occasion, the Globe reports, two reporters stood along a single-lane northbound ramp into the Tip O’Neill Tunnel: “Reporters counted nearly 650 cars in an hour flooding during the evening rush. In nearly 7 out of 10 of them, the driver rode alone.” The series also notes that last year the Boston metropolitan area gained 93,000 jobs as the rest of the state lost 65,000.

For many of the more than 7,000 BU employees on the Charles River Campus, commuting is a daily headache; 42 percent of them take mass transit to work, while 29 percent drive to work alone, according to Billy Hajjar, director of Parking & Transportation Services. Walking (third) and carpooling (fourth) are the next most common methods of getting to work.

Among all the issues the “Seeing Red” series raises, BU Today, with the BU community in mind, has called out five questions especially relevant to students, faculty, and staff, who know all too well the feeling of seeing red while sitting in traffic trying to get to or from campus.

1. Could congestion pricing work in Boston? ﻿

The premise is simple: if you drive into the city during peak rush hour times, tolls are higher for you. If you drive in during off-peak hours, tolls are reduced. So hypothetically, if your current Turnpike toll driving into Boston is $5 a day, and instead it is $3 if you came in later, that would be a savings of $2 per day, $10 per week, and approximately $500 a year. Could that sort of savings start to entice people to change their behavior? Of the country’s 10 largest metropolitan areas, 9 are experimenting with some congestion pricing to ease traffic and open up lanes for more buses and bicycles. London officials say congestion pricing there has reduced the volume of vehicles entering the city by 30 percent. Massachusetts Governor Charlie Baker has resisted congestion pricing proposals so far.

2. Would more people ride buses if Boston put more of a priority on buses?

The Globe series highlights a major shortcoming of transit in the region. Too many people drive into and out of the city alone. Imagine if more people carpooled or took buses. But as one story notes, Boston has just 3 miles of dedicated bus lanes, and 10 across the region, while New York has 100 miles and Seattle has 40. Also, buses are not allowed to use highway shoulders, and changing that could make bus travel in from certain suburbs much quicker and more attractive to commuters.

3. If the cost difference between driving and paying for parking versus riding public transit was big, not small, would that push commuters to change their ways?

MIT certainly thinks so, as the Globe series points out. The university not only made all bus and subway rides free for employees and provided an extremely generous subsidy for commuter rail passes, it also forced people who drive and park to pay a daily rate (rather than purchase an annual parking permit), with an annual cap. Suddenly, it was no longer a difference of a couple of hundred dollars between commuting choices. Now it was in the thousands. The result? Parking demand dropped more than 10 percent at gated garages and MBTA ridership by MIT people increased about 10 percent. The policy costs MIT about $2 million more per year. “It’s basically a win for everybody,” John Attanucci, a research associate at the MIT Transit Lab, told the Globe. The finding of “Seeing Red” was simple: if employers give their employees a choice between either discounted parking or discounted MBTA passes, more people will take the parking and drive alone. The car is king.

4. Should Uber and Lyft be charged more for driving in the city?

Here’s one staggering number from the Spotlight articles: there were 42 million ride-hailing trips in Boston in 2018. While the two leading services do pay a 20-cent fee for each trip they make in the commonwealth, that’s below what they pay elsewhere, and there is a push to charge them more here and offer discounts to encourage more carpooling.

5. Can you imagine if the subway and commuter rail systems were more reliable and reached more people?

Here’s a crazy idea: what if instead of investing in creative ways to make driving less appealing for commuters, significant money was invested in making public transit more attractive? Boston has the nation’s oldest subway system (it opened on September 1, 1897, making it 123 years young). The Red Line (opened in 1969), so critical to people coming from both the north and the south, just had its 50th birthday. And the Orange, Green, and Blue Lines are even older. Is it any wonder the Globe reports that the system “has suffered about 40 derailments in the last five years, more than almost any metro transit system in the country.” (See this December 9 BU Today story.) In December a Globe reporter published a map from 1947 showing what the rail system was supposed to look like when completely built out. It shows the Orange Line extending out to Dedham, the Green Line to Woburn and Needham, the Blue Line to Lynn, and the Red line to Lexington. Yes, investing in public transit is hugely expensive. But it could also be transformative. And besides, who said change is cheap?

Do you have an idea for improving Boston’s traffic/mass transit? Post it in the Comment section below.

There are 19 comments on Five Questions Raised by “Seeing Red,” the Boston Globe Series on Traffic