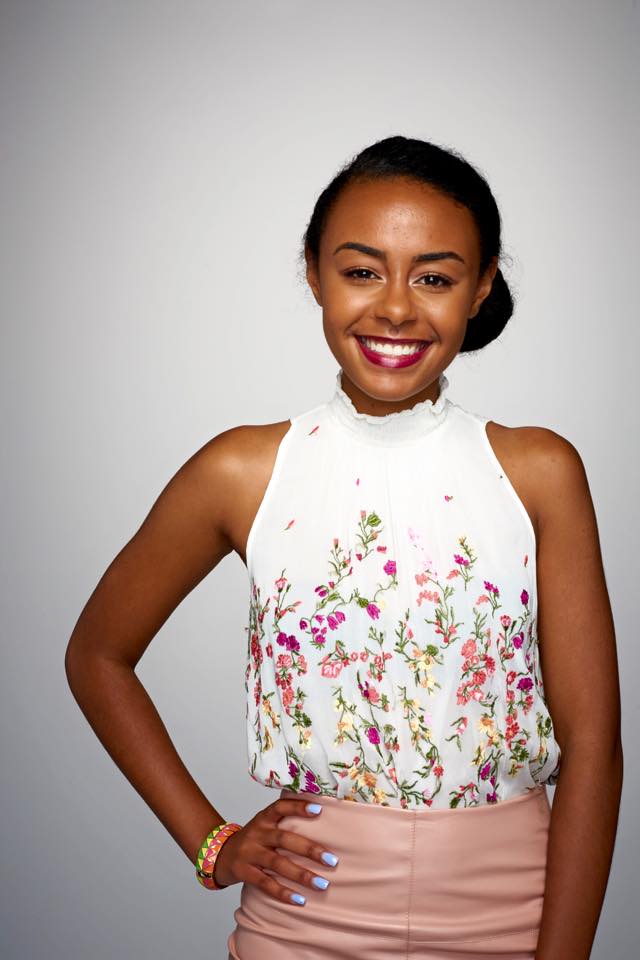 Photo of Erin V. Edwards (COM’21) from her Facebook page.

Services set for Wednesday for budding journalist Erin Edwards, who lost her life in Atlanta tragedy

A promising College of Communication junior and Posse scholar from Atlanta concerned about social justice, Erin V. Edwards should have spent this week introducing a group of first-year students to BU and Boston as a First-Year Student Outreach Project leader. Instead, her life was cut short last week in a violent family tragedy back home.

“Erin was just an amazing young woman; she didn’t let anything stop her,” says Nancy Lowenstein (Sargent’87), a Sargent College of Health & Rehabilitation Sciences clinical associate professor, who was a mentor to Edwards and other members of her Posse cohort. “Her smile lit up a room and her energy was contagious. She was an amazing writer and journalist. She was just a wonderful person in our Posse, always supportive and there, kind and giving.”

Kenneth Elmore (Wheelock’87), associate provost and dean of students, says Erin’s death “is a great loss for this community.” He describes her reach within the BU community as amazing, saying, “It is sad that we are facing such a tragedy. It remains as important as ever to reach out to each other and extend the grace, dignity, and energy Erin gave us. Please connect and support each other.”

Edwards, 20, died along with her 24-year-old brother and their mother last week in a shooting that police say was apparently committed by their mother.

Services for all three are scheduled to be held on Wednesday, August 28, at 11 am, at Cascade United Methodist Church, 3144 Cascade Road, SW, Atlanta, Ga. A viewing is set for Tuesday, August 27, from 10 am to 7 pm, at Sylvain Evans Funeral Home Chapel, 2750 Highway 42N, McDonough, Ga.

The Dean of Students office assisted several students in making travel arrangements to the funeral. An on-campus memorial service is being discussed, but officials are awaiting further direction from Edwards’ loved ones before proceeding.

“She told stories through times of pain and happiness, never leaving her passion for journalism too far behind,” her cohort of Posse scholars said in a statement. “But Erin didn’t just tell stories, she also was keen on listening to them. She would listen to her friends’ and family’s stories the same as a stranger’s, with thoughtfulness and sincerity. ”

Erin’s Posse cohort—nine rising juniors from the Atlanta area—asked to speak with one voice. This is what they said:

“There’s nothing more important than your story.” This is something Erin said often—she was a storyteller at heart with a passion to find the truth like no other. Whether she was writing her own for newspapers and magazines or indulging in others’ through Broadway musicals (she LOVED Hamilton) or binge-watchable series (three weeks to watch all of Game of Thrones has got to be a record), Erin lived in storytelling. She told stories through times of pain and happiness, never leaving her passion for journalism too far behind. But Erin didn’t just tell stories, she also was keen on listening to them. She would listen to her friends’ and family’s stories the same as a stranger’s, with thoughtfulness and sincerity.

Erin was never afraid to open her heart and let someone in. She was willing to sacrifice bits of herself to make others happy and was a ray of light for those around her. She was a selfless being and a beautiful soul, inside and out. She never failed to let people know how much she loved and cared for them.

She was radiant. She had a smile that immediately embraced you, and made you feel like you were home. And her laugh. She had a laugh that could make everyone stop in awe at how freely she expressed joy.

Today, the world lost a ray of light. She wasn’t just our friend or Possemate; she was our sister. She showed us all kindness even if we weren’t deserving. We love her and will miss her for all the days that she’s not here. Here’s to Erin: your story doesn’t stop here. Like the closing song to Hamilton, we promise to tell your story.

The Posse Foundation Scholarship is awarded to students who enroll at Boston University through the University’s partnership with the Posse Foundation. The foundation identifies public high school students with extraordinary academic and leadership potential that may be overlooked by traditional college selection processes. BU selects scholars from Posse Atlanta and Posse Bay Area and awards each a four-year, full-tuition leadership scholarship.

Edwards was to have returned to campus on Monday, August 26, where her long list of activities would have begun by serving as a student leader for FYSOP, a BU program that brings new students to campus a week early to volunteer for community service projects across the city.

In her two years on campus, Edwards was a daily presence at the Howard Thurman Center for Common Ground, according to associate director Pedro Falci (COM’11, Wheelock’15), from stopping in for tea to participating in the Coffee and Conversation program. “She was incredibly down-to-earth, sweet, genuine, and extremely accomplished,” Falci says.

She had been accepted as a Thurman Center student ambassador for the coming school year and would have facilitated this year’s Tea Time program.

She was the type of student we wish all students were; she took advantage of every available opportunity.

“I’m passionate about empathy,” Edwards wrote in applying to become an ambassador. “I believe empathy is the solution to virtually any problem and should be the first option when dealing with conflict. As a journalist, I try to promote empathy by sharing stories of underrepresented, marginalized people and uplifting their voices. I’m also passionate about community, because that’s what life is all about and that’s where it all starts—building community and connecting to other human beings.”

She wrote that she was studying journalism, film and television, and African American studies, and that she was editor-in-chief of Charcoal magazine, which she called BU’s “people of color–centric” literary arts publication. “I also report for the Daily Free Press, co-DJ a feminist talk show called Man Eater on WTBU, write scripts and stage manage for On That Point, BUTV10’s current events discussion show. My long-term career goal is to become a successful media professional that represents minority communities and tells their stories. My outrageous dream is to have my own podcast or talk show.”

“She was the type of student we wish all students were; she took advantage of every available opportunity, and I don’t think there’s an area of communication she didn’t touch,” says Dustin W. Supa, COM senior associate dean. “She was on the radio, involved in our TV station, involved in film and television, heavily involved in journalism. She is going to be missed.”

Edwards, who was also active in the National Association of Black Journalists (NABJ), spent part of this summer as a digital intern at an NBC station in New York and tweeted a link to what she called one of the favorite stories she did, a feature on a classical concert series returning to the catacombs of a Brooklyn cemetery.

Dorothy M. Tucker, NABJ president, released a statement on Twitter after the news: “The #NABJ family has lost three of our own. Our prayers and thoughts are with the family, friends, and colleagues of Marsha Edwards, Christopher Edwards II, and Erin Edwards. This tragedy has claimed the lives of three members, but touches countless more.”

Atlanta Mayor Keisha Lance Bottoms tweeted a tribute: “Chris and Erin were beautiful, vibrant, and brilliant young adults whom we had the pleasure of knowing their entire lives,” she wrote. “They filled the lives of all who met them with joy, compassion, and kindness.”

According to the Atlanta Journal-Constitution, police believe that Erin Edwards and her brother, Christopher Edwards, were shot to death by their mother, Marsha Edwards, 58, who then turned the gun on herself. Police responding to requests for a safety check on Wednesday evening found the three bodies in Marsha Edwards’ townhouse in Vinings, near downtown Atlanta, but exactly when the shootings happened is unclear and no motive has been discussed. Marsha Edwards was reportedly divorced from the children’s father, Christopher Edwards, chairman of the Atlanta Housing Authority board and a prominent orthopedic surgeon.

“Dr. Edwards, his extended family and friends are in a state of grief and shock, and privacy of the family is paramount as arrangements are being made,” family spokesman Jeff Dickerson told the Journal-Constitution in an email.

In her Thurman Center student ambassador application, Edwards wrote poignantly about the mission of the center: “Common ground, to me, means that even though we all come from different places, races, orientations, religions, and backgrounds and we all possess different interests, ideologies, and talents, there is more that connects us than separates us. Like Maya Angelou says in one of my favorite poems, ‘Human Family,’ ‘We are more alike, my friends, than we are unalike.’ We’re all human and endure the human experience together. We all know tragedy and struggle, but we also all have certain privileges. Some of us just have different struggles and privileges that we have to recognize and understand so we can all support each other through this journey of life.

“She was the mom of the Posse,” Mia Carradine (CGS’19, COM’21), a Georgia Posse cohort member, told the Atlanta Journal-Constitution. “She was always running late. So that’s how I’m dealing with her not being here. ‘Don’t worry, guys, she’s on the way.’”

For Erin Edwards’ community at BU, and for all students, faculty, and staff, counseling support is available, on campus and abroad, through the following resources:

Posse Scholar, COM Junior Remembered for Her Energy and Her Empathy

There are 11 comments on Posse Scholar, COM Junior Remembered for Her Energy and Her Empathy

Posse Scholar, COM Junior Remembered for Her Energy and Her Empathy
11
share this