To Do Today: Take a Trip to the Sea via the T

To the Sea by T 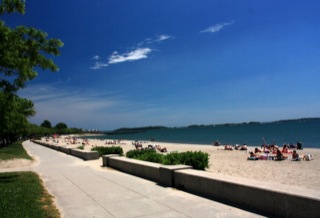 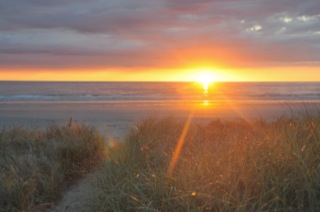 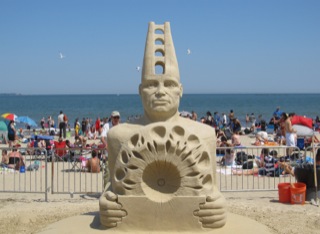 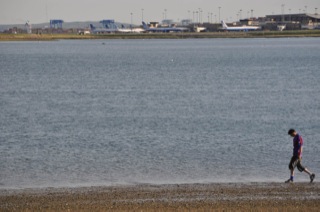 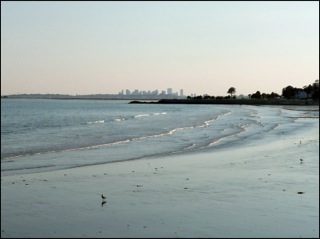 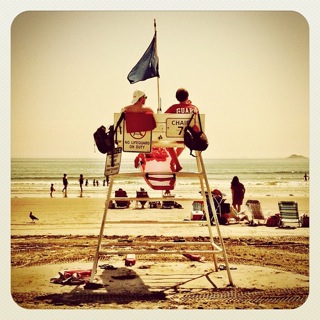 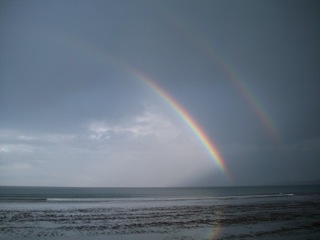 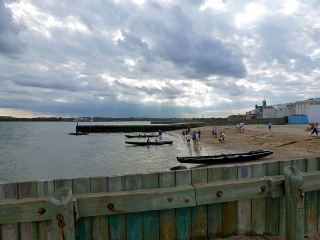 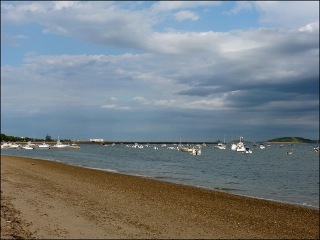 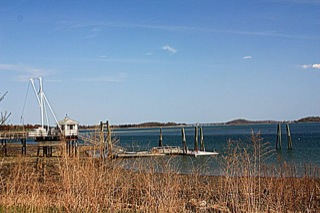 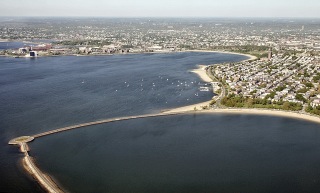 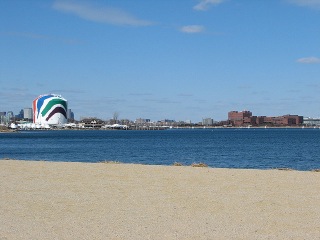 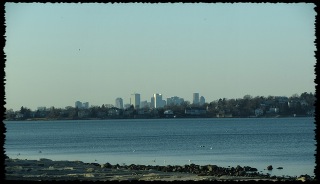 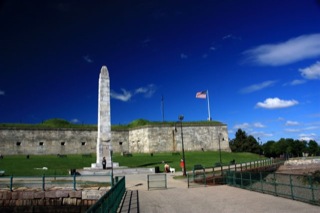 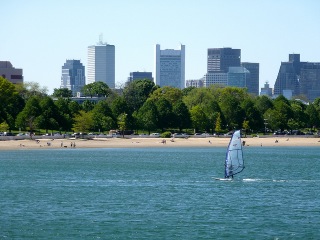 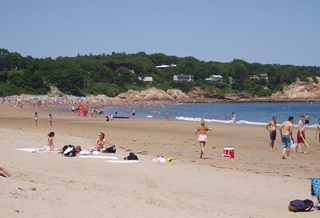 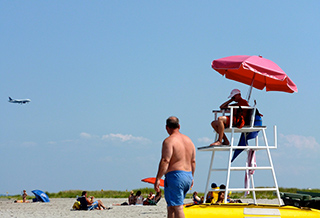 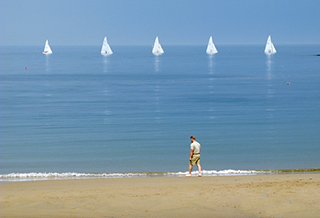 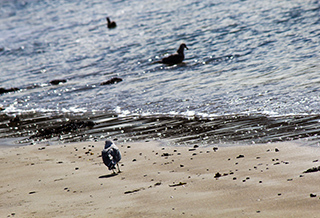 Click on the markers in the map above for more information about, and directions to, beaches accessible by the T. Designed by Boston University Interactive Design

If you’ve been dreaming of heading to a beach, but don’t have a car, you’re in luck—there are more than a dozen beaches reachable easily and cheaply by MBTA trains and buses. Check out our list of Greater Boston area beaches (from north to south) just a hop, skip, or jump away on the T. As noted, a few are available only by commuter rail. Getting to some requires additional bus connections and a bit of a walk, so be sure to check the map above for directions.

Among the northernmost beaches accessible by T are the Nahant, Lynn, and King’s Beaches—all part of the Lynn Shore & Nahant Beach Reservation. More than four miles of public waterfront provide a welcome escape from the city’s heat. You’ll find ball fields and racquetball and tennis courts near the Lynnway Rotary and a tot lot at Ward Bathhouse. Find a map of the beaches here.

Established in 1896, Revere Beach is the oldest public beach in America. It’s also one of the most popular in the Boston area, so expect the crowds to swell as the summer gets hotter. There are oodles of restaurants nearby for when you get hungry: try the justly famous Kelly’s Roast Beef or Antonia’s at the Beach.

By the T: Take the Blue Line to Revere Beach, and then walk a short distance.

By the T: Take the Blue Line to Orient Heights, and then walk down Bennington Street to Trident Street.

From the 1600s to the 1800s, Winthrop Beach was primarily used for clam digging, lobster fishing, and kelp and rock harvesting, but a commuter rail extension in the late 1800s made the beach popular with city dwellers and tourists. Often overshadowed by larger, more touristy Revere Beach, Winthrop Beach is considered by many a hidden gem. At low tide, you can walk out to the “Five Sisters,” five wave breakers completed in 1935. The beach is open year-round from dawn to dusk, with lifeguards on duty from late June to early September.

By the T: Take the Blue Line to Orient Heights, then a 712 bus to Shirley St @ Cutler St or a 713 bus to Veterans Rd @ Cutler St, and then walk a short distance east to Winthrop Shore Drive.

If Gilligan had gotten shipwrecked on Castle Island, he could have easily escaped—it has been connected to the mainland since the 1930s. The island is home to Fort Independence, a breathtaking pentagonal fort, built between 1834 and 1851, that today shares island space with grassy areas ideal for family picnicking. The eighth fort to occupy the site, Fort Independence has been designated a National Historic Landmark and is the oldest continuously fortified fort in British North America. There’s a small beach, which has some slightly rocky spots along Pleasure Bay, that’s one of the city’s most popular swimming destinations. There is also a fishing pier along the Harborwalk. Bring comfortable footwear because you’ll have to walk nearly a mile to Castle Island.

By the T: Take the Red Line to Broadway, get a 9 bus to Farragut Rd opp E 2nd St, and then walk down Head Island Causeway to the beach.

The side-by-side L Street and M Street Beaches connect the beach at Pleasure Bay with Carson Beach. Featuring spots to walk, jog, skate, or bike along the Harborwalk, they are two of the longest stretches of uninterrupted beach in Boston. If you can’t get enough of swimming, consider joining the famous L Street Brownies, a local group of swimmers who take to the ocean year-round in a tradition dating to the late 1800s. They are famous for their annual New Year’s Day plunge, first held in 1904.

Another seaside destination on the Harborwalk, Carson Beach offers excellent swimming, along with plenty of areas for strolling and biking; there are also chess tables and bocce courts. The bathhouse has restrooms, changing rooms, and showers. Carson Beach also has a fishing pier and great views of Boston Harbor and Logan Airport.

By the T: Take the Red Line to JFK/UMass, and then walk down William J. Day Boulevard.

They may not be in California, but just the same, Malibu and Savin Hill Beaches are great places for sunbathing. Both have protected swimming areas, and Savin Hill Beach also has a tot lot and baseball fields. Both beaches offer stunning views of one of Boston’s best-known landmarks and the world’s largest copyrighted artwork, the “Rainbow Swash,” painted by Corita Kent on a National Grid gas tank. Take a close look at the colorful design—it’s alleged that Kent painted the profile of former Vietnamese leader Ho Chi Minh onto the side of the blue stripe.

By the T: Take the Red Line to Savin Hill, and then walk down Savin Hill Avenue to Denny Street.

If you’re more interested in catching an ocean breeze and great views of downtown Boston than in swimming, consider heading to this often sparsely populated beach. Tenean Beach also has tennis courts. Note: basketball courts and restrooms are currently closed.

By the T: Take the Red Line to North Quincy, then a 210 bus to Neponset Ave @ Ashmont St, and then walk for about 11 minutes.

If you’re looking for a beach that offers more than swimming, Quincy Shores Reservation may be the place for you. The area is equally popular for its jogging and bicycling trail. At one end of the 2.3-mile beach is Caddy Memorial Park, a recreational area with over 15 acres of fields equipped with a play area, a lookout tower, and picnic tables. At the other end is Moswetuset Hummock, a mix of trails and marshland that was a summer campsite of Native Americans in the 1600s and is today a National Historic Site. Visitors will have about a mile walk to the beach.

By the T: Take the Red Line to North Quincy, then a 211 bus to E Squantum St @ Appleton St, and then walk about 5 minutes to Quincy Shore Drive.

Nantasket Beach, which bills itself as “just one wave from Boston,” is in the seaside peninsula town of Hull and can be reached by commuter rail, as long as you don’t mind a 2.5-mile walk. But it’s well worth the effort: Nantasket is one of the most fun-filled summer destinations you’re likely to find. The beach is part of Nantasket Reservation, 26 acres spread out over nearly a mile and a half of oceanfront. Take a ride on the historic Paragon Carousel, one of the nation’s few remaining grand carousels and one of the last vestiges of the now-defunct Paragon Park, an amusement park that once drew thousands of tourists daily. Band concerts are a summer staple here, as well.

By the T: Take the Red Line to Quincy Center, and then get on a 220 bus to Station St @ Hingham Depot. Switch to a 714 bus to Nantasket Ave from Kenburma St to A St, and then walk about 8 minutes.

Front Beach and Back Beach, Rockport

Front Beach and Back Beach, nearly adjacent on Rockport’s Sandy Bay, offer varied experiences. Front Beach, a quiet respite from the bustling downtown scene, has lifeguards in season, public restrooms, and a swim platform 30 feet out from shore. Its proximity to town makes it easy to get to many of Rockport’s restaurants and shops. Back Beach is best known for its rocky shoreline and offers one of the North Shore’s most protected dive sites, making it a favorite of scuba divers. It’s also notable for great views and surf.

By the T: From North Station, take the Newburyport/Rockport commuter rail line to Manchester-by-the-Sea, then hop on the Rockport Line Shuttle to Rockport, and then walk about 9 minutes.

True to its name, the popular Singing Beach has sand that “sings” if you scuff or shuffle your bare feet forcefully enough through the sand when it’s dry. And if you find yourself in need of refreshment, stop for an ice cream cone at Captain Dusty’s. The beach also has a bathhouse, open daily from 9 am to 7 pm from mid-June until Labor Day, which features a small canteen/snack bar. The beach has a $7 walk-on fee during the summer season, but there are also $20 walk-on passes good for the season. People 65 and older are allowed on the beach for free.

By the T: From North Station, take the Newburyport/Rockport commuter rail line to Manchester-by-the-Sea, and then walk up Beach Street (away from downtown) for approximately 12 minutes.

To Do Today: Take a Trip to the Sea via the T

There are 12 comments on To Do Today: Take a Trip to the Sea via the T

To Do Today: Take a Trip to the Sea via the T
12
share this