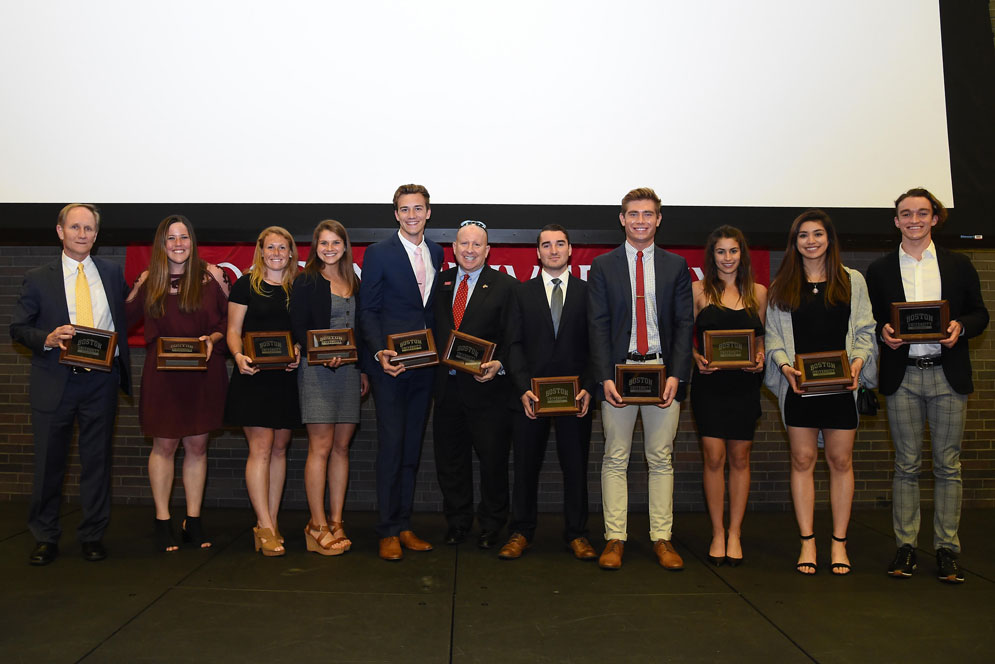 Each year at a spring ceremony, BU awards the Rhettys, celebrating the achievements of BU athletes. From the major awards given by BU Athletics to the Athlete Choice Awards, nominated and voted on by fellow student-athletes, the Rhettys celebrate all things BU Athletics. Read about this year’s winners.

Grant Eberst (Sargent), Men’s Rowing
After three relatively quiet years, Eberst has sparked as a senior, helping the Terriers, currently ranked eighth in the country, as part of its first varsity eight boat. Most recently, he helped BU defeat 10th-ranked Dartmouth to reclaim the Bill Cup for the first time since 2016.

Reagan Rust (CAS), Women’s Ice Hockey
Since transferring from RIT after her sophomore season, Rust has been a key member of the women’s ice hockey team, most recently as a tri-captain. The Hockey East Honorable Mention All-Star scored 31 points during her two seasons with the Terriers.

Given to the top male scholar-athlete

Given to the top female scholar-athlete

Given to the top female athlete of the year, regardless of class

Given to the top male athlete of the year, regardless of class

Chris Gray (CGS) Men’s Lacrosse
After being named an Inside Lacrosse preseason All-American, Gray has surpassed expectations with the nation’s third-ranked 6.46 points per game. The sophomore sensation is the first lacrosse player to win the award.

Woman of the Year Award

Given to a female athlete who best exemplifies a commitment to service, leadership, athletics, and academics over her career

Pietra Sweeney (Sargent), Women’s Soccer
A team tri-captain as a senior, Sweeney helped ensure that her team was consistently among the best defensive teams in the conference. The two-time member of the Patriot League Academic Honor Roll also boasts a variety of volunteer experiences, including with Soccer Without Borders and Special Olympics.

Given to a senior student-athlete who demonstrates a commitment to serving BU, the department of athletics, and the larger Boston community over his or her time at BU

Johnny Kemps (Questrom), Men’s Track & Field/Cross Country
Senior Kemps transferred from Boston College after his freshman season and has represented the Terriers very well since. He’s been named to the All-Conference First Team in 2018 and the Patriot League Academic Honor Roll four times, once for cross country and three times for track and field.

Given to a head or assistant coach who best embodies a holistic, values-based caring approach

The one and only coach the program has ever known, Durocher is the second recipient of the award, established last year. The 14-year head coach guided the Terriers to their first Beanpot title since 1981 and their first-ever Beanpot trophy as a varsity program.

Given to a student-athlete or coach who “bleeds Scarlet and White” and best exemplifies Terrier Pride: leadership, determination, citizenship, humility, and teamwork

Alex Heinen (CGS, COM), Softball
Among the team captains since junior year, senior Heinen will look to help BU claim its third conference title in four years. The 2018 Patriot League Player of the Year is also a two-time member of the Patriot League Academic Honor Roll.

Laviano missed all of last season to injury, but returned this season as one of the team’s tri-captains. He has helped the Terriers post a 10-4 record, 7-1 at home, so far this season.

After three quiet seasons, Spearman turned heads this year when she led the Patriot League in 3-pointers, with 2.3 per game. She was a constant presence on the floor, averaging 38 minutes a game.

Given to the program with the top average GPA

Junior Lohrer hasn’t appeared on the field since an injury in 2018, but she has been recognized for her constant support for her teammates. She has twice been named to the Patriot League Academic Honor Roll.

Junior Davidson (also a redshirt sophomore in cross country) garnered a Second Team All-Patriot League honor in 2018 after a 10th-place finish at the Patriot League Championships.

Breakout Athlete of the Year

Despite being a freshman, Aubry competed as part of the silver medal–winning relay group during the 2019 Patriot League Indoor Track and Field Championships. The runners fell short of gold by only a 10th of a second.

It was a record-breaking indoor season for senior Cicchetti, who broke a 31-year-old weight throw record in December, only to break it twice more by the season’s end. Her latest record stands at 17.97 meters.

The BU women’s ice hockey team claimed its first Beanpot title since 1981 and its first as a varsity program. The Terriers upset the third-ranked Northeastern Huskies before defeating host team Harvard in overtime in the championship game. Find BU Today’s photo essay here.

Sophomore New found the top-left corner of the net in the 2019 Patriot League title game against American University, a goal that proved to be the conference tournament’s winning goal. She has twice been named to the Patriot League Academic Honor Roll.

And here’s Maggie’s goal… incredible shot after getting to the ball before it left the circle! pic.twitter.com/oqq7HEdXZb

Junior Gugel won the 5000-meter race at the 2019 Patriot League Indoor Track and Field Championship after finishing 12th the season before. She shattered her personal record by over 30 seconds. She has been on the Patriot League Academic Honor Roll.

And the Best BU Athletes of the Year Are…