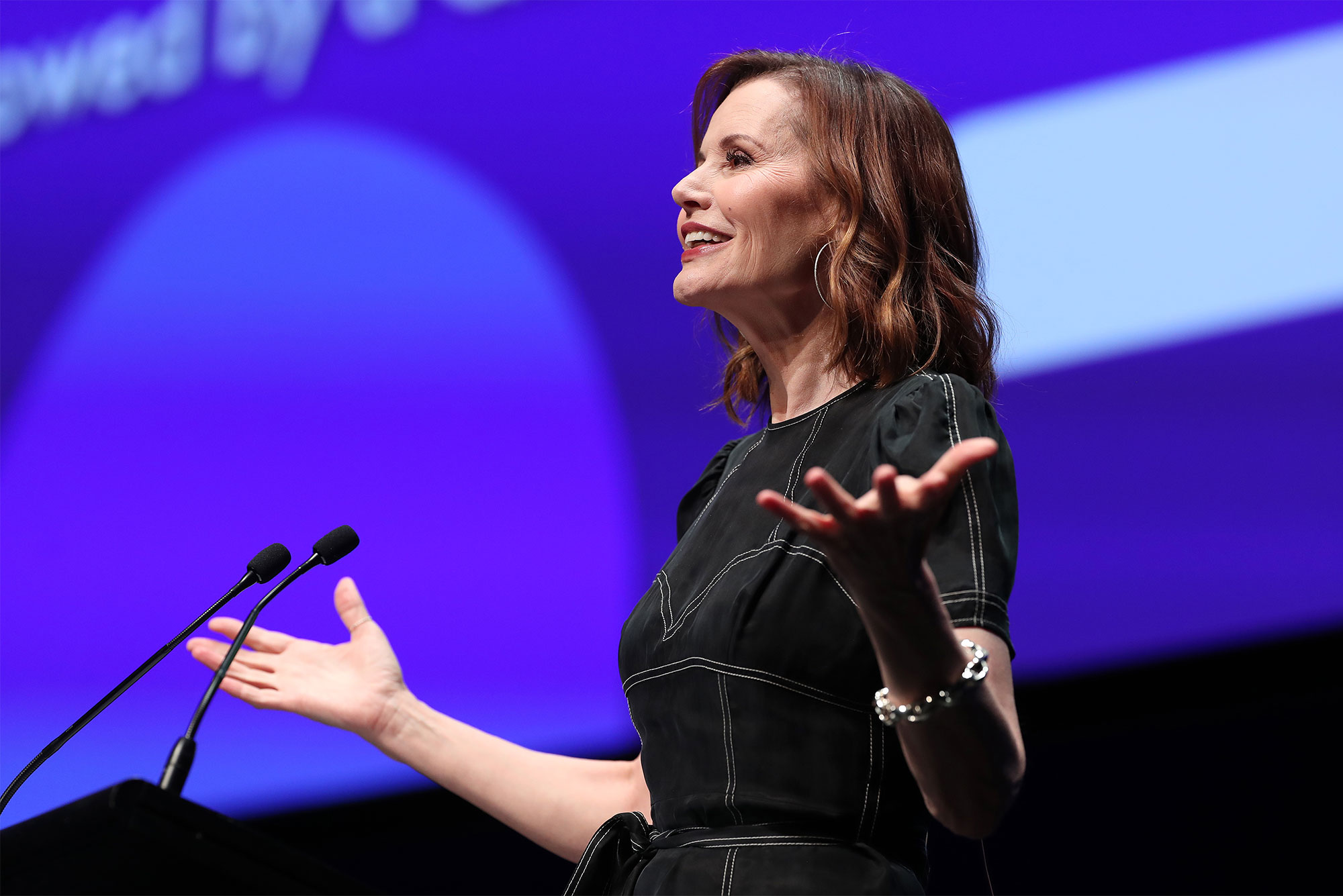 Actor Geena Davis delivering the keynote address during The Power of Inclusion Summit 2019 at Aotea Centre October 3, 2019, in Auckland, New Zealand. The global summit brought together individuals who shared their stories, experiences, and expertise to generate momentum for a future where representation and inclusion are the new screen industry standards. Photo by Michael Bradley/Getty Images for New Zealand Film Commission

In 2004, actor Geena Davis started a nonprofit to combat the deep gender inequality she was seeing in children’s films. Up until then, she got a cold response from people in the industry whenever she brought it up.

“Nobody believed what I was saying,” says Davis (CFA’79, Hon.’99). “People were completely blind to the problem.”

Not anymore. The #MeToo and Time’s Up movements have pushed gender equality center stage and proven the need for the kind of cutting-edge research that the Geena Davis Institute on Gender and Media has been doing for a decade and a half. The institute’s work is data-driven, using technology and research to quantify the ways women and girls are underrepresented in film. Its research has found that male lead roles have outnumbered female lead roles by two-to-one in the last decade, and that white lead roles outnumber those of people of color four-to-one. The numbers don’t lie, Davis says, and they gave the actor—who by 2004 already had an Academy Award and a significant platform—a way to talk about what others weren’t.

Her work will be honored on Sunday during the Academy of Motion Picture Arts and Sciences 11th annual Governors Awards, where Davis will be presented with the Jean Hersholt Humanitarian Award given to a person “whose humanitarian efforts have brought credit to the industry.” She will be in good company: previous recipients include Paul Newman, Oprah Winfrey, and Angelina Jolie.

Davis received the 1989 Oscar for Best Supporting Actress for her role in The Accidental Tourist. Since then, she’s taken on epic female roles in films like Thelma & Louise and A League of Their Own. She says her first love remains acting (you can see her in this season’s Netflix series GLOW) and that she never set out to be an activist. But the New York Times recently credited the Davis Institute with setting the stage for #Time’s Up, a movement to stop sexual harassment founded by Hollywood celebrities last year.

“That’s pretty cool,” Davis says of the recognition. “I see this problem as something that can actually change.”

Davis was also a Special Envoy for Women and Girls in Information and Communication Technologies for the United Nations International Telecommunication Union in 2012, and was chair of the California Commission on the Status of Women. In 2015, she launched the Bentonville Film Festival to promote women and diversity in the film industry.

Also being honored at Sunday’s Governors Awards ceremony are directors David Lynch and Lina Wertmuller and actor Wes Study, who will receive Honorary Oscars. Clips of Sunday’s ceremony will be shown during the 92nd Annual Academy Awards ceremony on February 9, 2020.