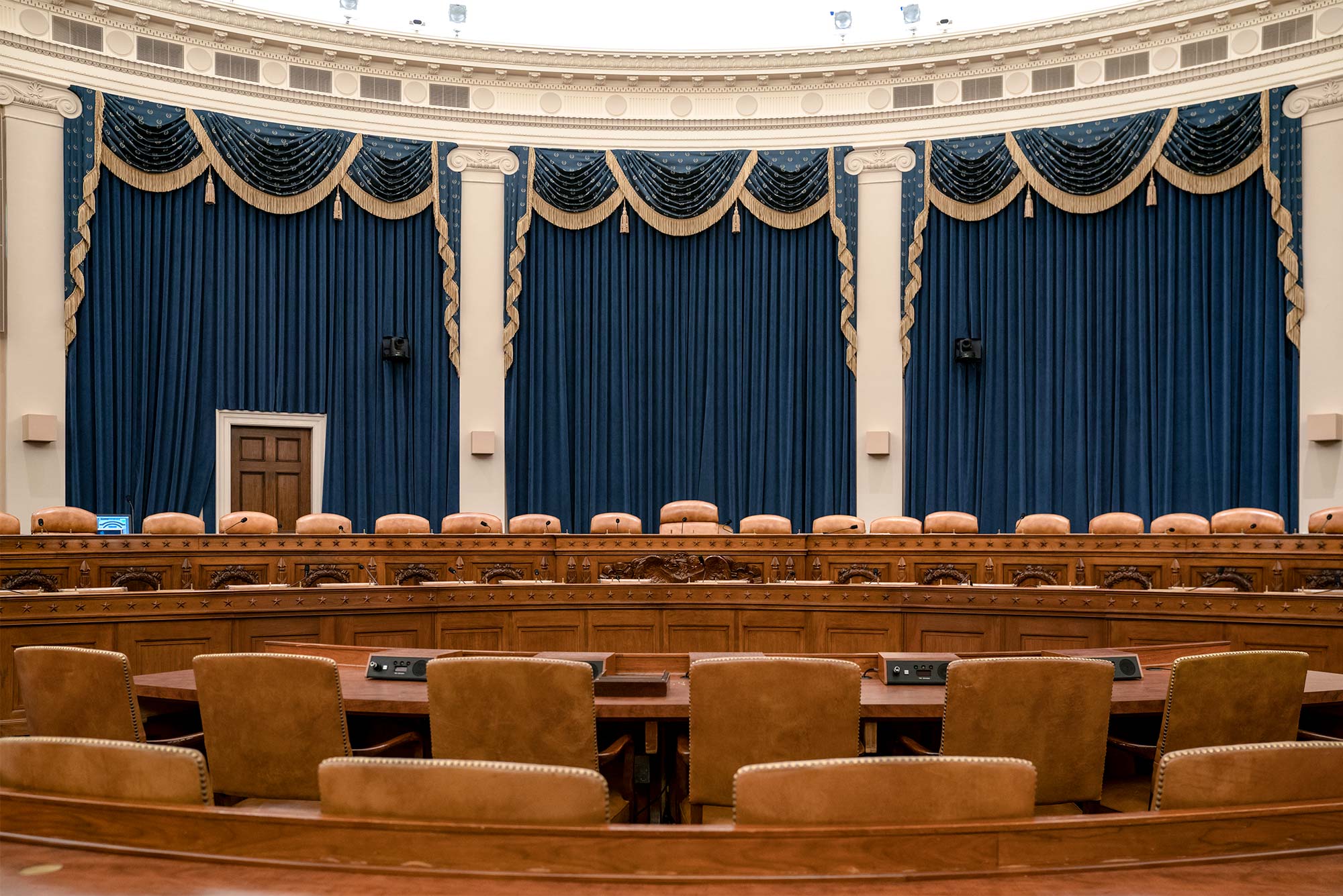 The Longworth House Office Building committee room, where the first public hearings in the impeachment inquiry against US President Donald Trump are scheduled to start Wednesday, November 13, at 10 am. AP Photo/J. Scott Applewhite

With the 2020 Presidential Election Less Than a Year Away, Nine Key Questions to Ponder

From impeachment to running mates to climate change to gun control to online privacy, BU experts on what to watch for

The United States is officially less than a year away from the 2020 presidential election. And the highly anticipated public impeachment hearings against President Trump begin today, Wednesday, November 13, at 10 am (all the major networks will cover them live). Buckle up, it’s going to be a bumpy ride until next November 3. Will it be four more years of Trump? Or will Democrats take back the White House—with the first woman president (Elizabeth Warren), the first openly gay president (Pete Buttigieg), the oldest president (Bernie Sanders), or a return to the politics of President Obama (Joe Biden)? Or none of the above?

We asked a range of experts at Boston University to tell us, in their view, what some of the critical questions will be in the months ahead that will ultimately shape, define, and perhaps even decide what could be the most politically divisive election in modern American history. Some posed more than one question.

Angela Onwuachi-Willig
Dean and professor of law, School of Law

Will voter suppression play a role in the outcome of the 2020 presidential race?

Onwuachi-Willig says she wonders if Democrats will come to understand that the best way to win the election is to fight hard against voter suppression and ensure that people in all communities really have access to voting.

Could choosing the right or wrong running mate be the biggest decision for Democrats?

The LAW dean thinks one of Hillary Clinton’s biggest mistakes in 2016 was her choice of running mate, specifically, if she wanted to bring out people of color to vote in the numbers that President Obama brought out.

“My question is whether any of the front-runners, Biden, Warren, Sanders, Buttigieg, if any one of them is selected as the primary candidate, has any chance of winning if they do not select a vice president running mate of color,” Onwuachi-Willig says. A few potential tickets that people are floating, she says, are Sanders or Buttigieg as president and former Georgia state representative Stacey Abrams as vice president, or Warren as president, with former Florida mayor and gubernatorial candidate Andrew Gillum as vice president.

“It’s interesting,” she says. “I think for many people, if Kamala Harris or Cory Booker were to win the primary and be the presidential candidate, they would expect Booker and Harris to pick a white running mate. The same is not expected by many people of the four front-runners, even though people of color make up the most reliable and critical portion of the Democratic base.”

What actions will each candidate take to reduce gun violence?

For the first time in history, Siegel says, the issue of gun violence is going to play a significant role in a presidential election, with so many recent mass shootings still on the minds of voters. “The Democratic candidates are fighting among themselves to show who is strongest on gun violence,” he says. “It will be less important in the general election, but it could still be an important issue for many voters.”

How will the candidates take on issues regarding ensuring the safety of our online privacy?

Citron, a 2019 MacArthur Fellow, has testified before Congress about the perils of deepfake videos and online harassment and abuse. And she is warning candidates that they had best have a plan to combat those threats during the campaign.

“Our commitment to an informed citizenry, one less subject to manipulation based on personal data profiles, is in jeopardy,” she says. “A crucial question is how presidential candidates tackle the ground rules around privacy and the online advertising business model.”

As most people know, Donald Trump won the presidency through the Electoral College, but he lost the popular vote to Clinton by nearly three million votes. Should that matter?

“In 2020, Trump has a clear (if uncertain) path to reelection,” Schulman says, “but almost no chance of winning the most votes. How would Americans react to the reelection of a president” who received a minority of the popular vote—and possibly by a wider margin than in his first election?

Americans do not choose their president in a national election, Schulman says, but instead the decision is made through 51 separate state contests (really 48 states, plus the District of Columbia and local elections in Maine and Nebraska). In a close contest, a single state could decide the outcome.

“In 2020, the Democrats could win back Michigan and Pennsylvania, Trump holds the other states he won in 2016, leaving the outcome of the election to Wisconsin, a state that has swung back and forth several times in recent state contests,” Schulman says. “Where Wisconsin goes likely goes the fate of the Republic.”

Mariette DiChristina (COM’86)
Dean and professor of the practice, journalism, College of Communication

Here is a statistic for you: Rock the Vote, a nonpartisan nonprofit that for three decades has worked to register, educate, and increase the participation of young voters, says that block has the power to shift the direction of the country in the coming election—if they want to. The organization says nearly 40 percent of voters in 2020 will be millennials (born between 1981 and 1996) or from Generation Z (born between 1996 and 2010).

With that in mind, DiChristina decided not to submit her own questions, but to ask her recent college graduate daughter, Selina Gerosa (CFA’18), as a younger voter, what questions these young voters feel are critical to the contest.

What questions do you think will be critical in the 2020 election? Leave them in the Comment section below.

The US House of Representatives public impeachment hearings against Donald Trump will be held Wednesday, November 13, at 10 am, and Friday, November 15, at 11 am. The hearings will be covered live on all major television networks and on National Public Radio.

With the 2020 Presidential Election Less Than a Year Away, Nine Key Questions to Ponder

There are 7 comments on With the 2020 Presidential Election Less Than a Year Away, Nine Key Questions to Ponder

With the 2020 Presidential Election Less Than a Year Away, Nine Key Questions to Ponder
7
share this