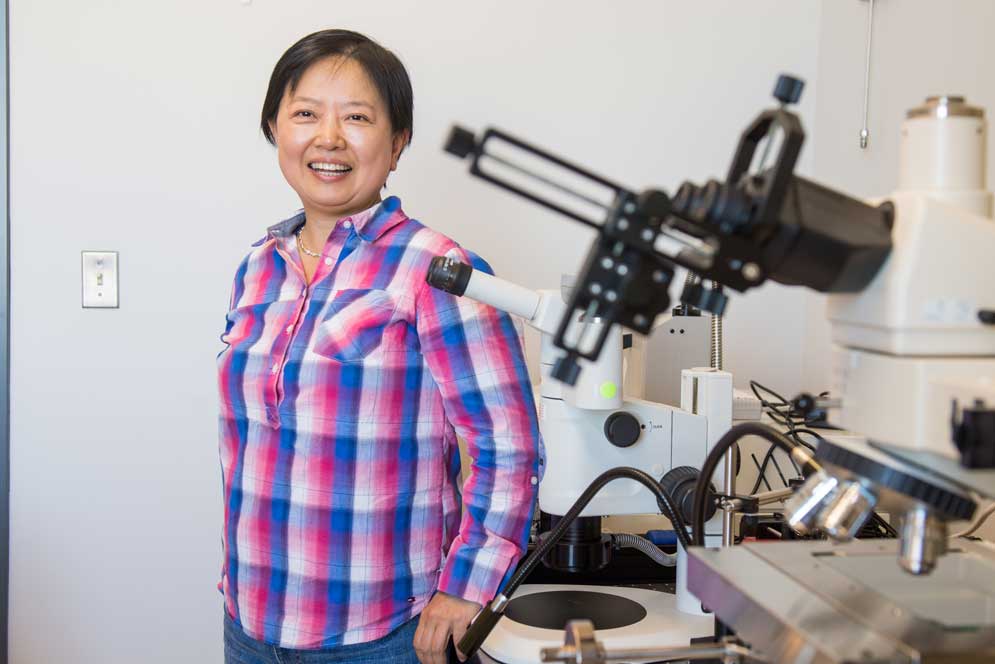 Xin Zhang, a College of Engineering professor, is the ninth faculty member to receive the BU Innovator of the Year award. Photo by Cydney Scott

Xin Zhang is well-known for her pioneering work with metamaterials in areas as diverse as magnetic resonance imaging (MRI), downwell sensor technology for the oil industry, and noise-cancellation acoustics. A College of Engineering professor of mechanical engineering and materials science and engineering, she is the director of BU’s Laboratory for Microsystems Technology (LMST), which focuses on interdisciplinary research in microelectromechanical and nanoelectromechanical systems.

“Zhang is a creative innovator. You describe a problem to her and she can solve it,” says Michael Pratt (Questrom’13), managing director of BU’s Office of Technology Development. “She’s a go-to person for getting something done. It’s a true quality of an engineer, right? She can use these fundamental technologies and solve important problems across various domains.”

Zhang’s translational research has earned her this year’s Innovator of the Year award, bestowed annually by the University on a faculty member who “translates his/her world-class research into inventions and innovations that benefit humankind.” The award was presented last night during BU Connect, an annual research and innovation showcase. Zhang is the ninth faculty member and the first woman to win the award.

“Professor Zhang’s ability to carry out pioneering and exceptionally creative work in a wide range of fields is a model and inspiration for other faculty members—particularly females,” says Gloria Waters, vice president and associate provost for research and a Sargent College of Health & Rehabilitation Sciences professor of speech, language, and hearing sciences. “Her ability to translate fundamental discoveries into practical applications is exceptional. I am certain that both her current and future work will have a major impact on society.”

What exactly are metamaterials, anyway? Zhang defines them as artificial materials in small-scale structures that essentially act like atoms, designed to react to electromagnetic or acoustic stimulation.

In letters nominating Zhang for the award, colleagues cited three examples of her efforts to take research and transform it into work that can benefit the public.

Zhang and Anderson have established the start-up company Primetaz to translate the scientific findings to clinical applications, drawing interest from major companies involved with MRI technology. “The project’s successful application will improve the scanning efficiency and image resolution for MRI and potentially help millions of patients,” wrote Mark Grinstaff, ENG Distinguished Professor of Translational Research, an ENG professor of biomedical engineering, and a College of Arts & Sciences professor of chemistry, in his letter nominating Zhang for the award. Grinstaff is also director of the Nanotechnology Innovation Center.

Another research project helmed by Zhang has led to the creation of a kind of antenna that receives data from miniaturized sensors flowing through pipes deep down inside oil wells. Zhang, Duan, and Zhao developed a wireless fluidic readout platform for miniaturized sensors, which monitors factors such as pressure and temperature inside the wells. The sensors flowing through a tube are interrogated and charged wirelessly using microwave metamaterials. The patent Zhang filed on this technology has attracted attention and interest from the oil and energy industry, because it will enable better monitoring of the downhole environment of oil wells, potentially boosting efficiency and enabling early warnings of quality or safety issues.

The third project sounds like something straight out of science fiction. Zhang, Anderson, and doctoral student Reza Ghaffarivardavagh (ENG’20) have created a new method of airborne sound attenuation—structures with openings that allow air and light to move through, but made out of metamaterials designed to cancel out specific frequencies of unwanted sound. It’s not a sound barrier, but rather a passive structure capable of disruptive interference to cancel out the sound waves passing through it. The invention, currently in the proof-of-concept stage, could, for example, one day make it possible to reduce the noise from a loud fan without reducing its airflow.

Asked about her most important skills, Zhang talks about her ability to spot good students and a willingness to try unexpected approaches. “Learn to fail, instead of fail to learn,” she says.

“Acoustic metamaterials is a new field. No one nearby is working on this field,” Ghaffarivardavagh says. “The reason we have reached this point is because the professor is willing to work on very novel science that has not been developed,” because it’s too risky to try, “but may be rewarding too.”

A native of China, Zhang earned a PhD at Hong Kong University of Science and Technology and did postdoctoral research at MIT. She joined BU in 2002. She received a National Science Foundation Faculty CAREER Award in 2003 and in 2009 was named ENG’s inaugural Distinguished Faculty Fellow, an honor given to tenured engineering faculty. Despite the complex nature of her work in her Photonics Center LMST lab, she is clear about what drives her: solving problems with real-world applications.

“I am interested in: can you make an impact?” Zhang says. “The problem has got to be difficult enough that it has not been solved, and important enough.”

There is 1 comment on ENG’s Xin Zhang Is BU’s 2018 Innovator of the Year, First Woman Chosen