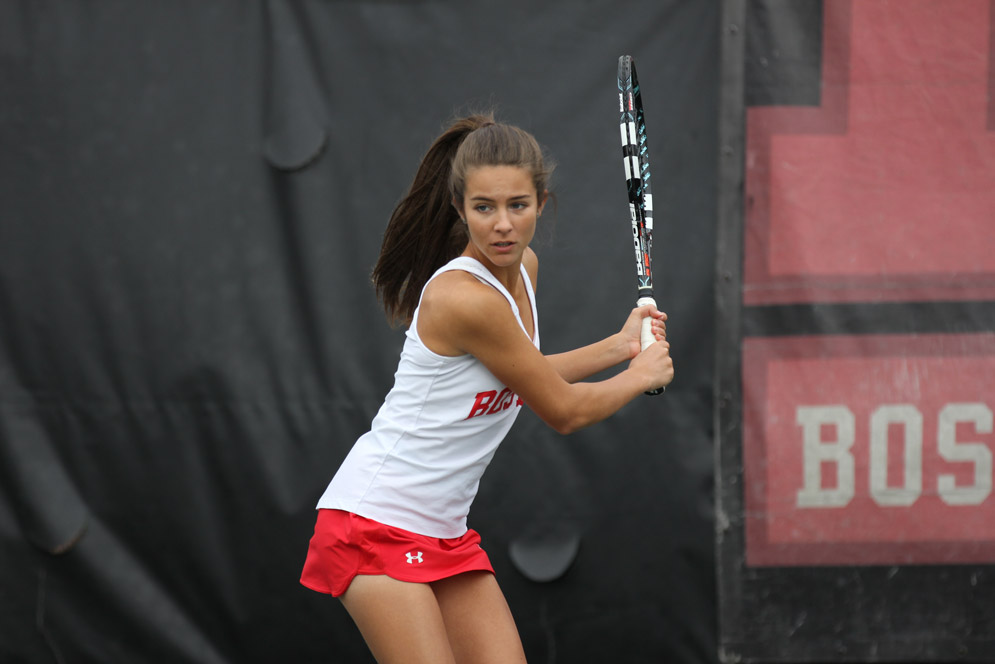 Iryna Kostirko (Questrom’18), the lone senior on the women’s tennis team, has been named to the All-Conference Team three years in a row. Photo by BU Athletics

This weekend, the BU women’s tennis and golf teams begin postseason play, each shooting for a Patriot League championship. The women’s tennis tournament begins today at West Point, and the golf quarterfinals are tomorrow in Annapolis. Both tournaments will be decided on Sunday.

Under the leadership of head coach Lesley Sheehan (SED’84), BU has dominated in the Patriot League: the women have won four consecutive championships since joining the conference in 2013.

Today, the Terrier women will begin their hunt for a five-peat, a feat accomplished only once before in Patriot League history. Army, coincidentally this year’s tournament host, won nine in a row until they were overtaken by the Terriers.

Leading the team’s roster is 2017 Patriot League Player of the Year Remi Ramos (COM’19, Questrom’19) and three-time All-Conference Team player Iryna Kostirko (Questrom’18). The team has also relied heavily on its four freshmen, three of them will compete in this weekend’s singles; all four will play in the doubles.

The Terriers’ ambition to snag a fifth league title won’t be easy. They posted a record under .500 (8-12) for the first time since joining the conference, but Sheehan remains optimistic and says the team’s tough schedule—more competitive than many other Patriot League schools—was by design.

“This is what’s going to make them better players, to play this type of competition,” Sheehan says. “If you look at the Patriot League teams, although they may have better records than we do right now, they have not played anywhere close to the schedule that we’re playing.”

As a result, the Terriers have been strong in Patriot League play. Despite ending the season with a 3-4 loss to Army last weekend, they finished third in conference play (3-1 record). They also defeated the number-two team in the conference, Navy, 5-2, earlier in the season.

While their tough schedule this season resulted in a few demoralizing losses—including a 7-0 sweep by Old Dominion in March—it’s also given them opportunities to hone their competitive edge. In early February, a matchup against Harvard went down to the wire, when a flu-ridden Katya Martens (CAS’21) won the last singles match to help the Terriers defeat the Crimson for the first time since 2009.

Sheehan believes her freshmen will be ready for this weekend’s playoffs, but with just four conference games played this season—fewer than any Patriot League team—they can’t take anything for granted.

“We try to convey to them that this is not a guaranteed win and that this is not going to be easy,” Ramos says. “We have to put as much or even more effort into these matches than we did in our previous matches against the really tough schools.”

The young team will certainly depend on Kostirko, its lone senior, whose work ethic and competitiveness have inspired her teammates, Sheehan says. “She’s a very fierce competitor. You never count her out, even when she’s down.”

Entering her fourth and final conference tournament, Kostirko hopes to not only win her fourth Patriot League tournament title, but to advance to the NCAAs. “If we can win the NCAA first round, that would be amazing,” she says.

The Terriers have entered the NCAA tournament as the unranked team each of the last four seasons, and therefore have always faced a top-16 team and been swept in each of their meetings. But Ramos hopes that if they can advance to the NCAA this year, things will be different.

“We’ve played some really good schools this year and some ranked players,” she says, “so I think we’re more prepared than ever to play these schools. And while we haven’t won any matches, we’ve had some really close sets. I think that if we make it this year, we’ll be able to do better than we have before.”

But first, the Terriers must face—and beat—the Loyola Greyhounds in the Patriot League tournament quarterfinals this afternoon.

The golf team has also been successful since joining the Patriot League in 2013. The Terriers have finished at least second in each of their five conference championship tournaments, and they won the title in 2015. But after three-time Patriot League individual champion Adela Cejnarova (CAS’17, COM’19) graduated last year, no one was certain of what this season would bring. But the returning players have shown that they’re more than capable of holding their own.

And while Cejnarova’s BU playing career is over, she continues to be a presence as an assistant coach. Arguably the most decorated player in conference history, she has been a big help to the team, says head coach Bruce Chalas. “She’s played a lot of tournament golf all her life,” he says. “Her ability to personalize that on an individual basis with the players—I think that in itself can make a big difference.”

Phyllis Tang (CGS’16, Sargent’18, MET’20), who finished second behind Cejnarvoa in last year’s championship, and Megan Carter (CGS’17, Questrom’19), who finished third, are among the returning players the team is counting on at this weekend’s conference tournament.

During the spring season, the improvement in Tang’s game has been impossible to miss. With the exception of last weekend’s Hartford Invitational, she has improved her ranks in every tournament—starting with a T70th finish at the Kiawah Island Classic and swinging a career-low 54-hole score of 221 for a tie for third place at the Harvard Invitational. Chalas credits her meticulous note-taking and work ethic. “If you’re on the golf team, you can’t help but to notice her work habits on the golf course,” he says.

Chalas’ main concern going into this weekend’s championship has been about keeping his players well. “Our emphasis particularly in the past few weeks has been good health,” he says.

As Tang prepares to wind down her BU career, she hopes to emulate Cejnarova’s success last season and become the next individual champion. “It’s been my goal this whole year to win as a team, but of course, as an individual as well,” she says, and she thinks the trick for herself and her teammates is to avoid getting caught up on scores, and to keep an eye on the bigger picture.

Chalas is confident they’ll do just that. “There’s no question we can get it done.”

The BU women’s tennis team competes in the Patriot League tournament quarterfinals today, Friday, April 20, at 1:30 pm at the Lichtenberg Tennis Center, 1204 Stony Lonesome Rd., West Point, N.Y. The semifinals are on Saturday, at 2 pm, and the championship game is Sunday, April 22, at noon.