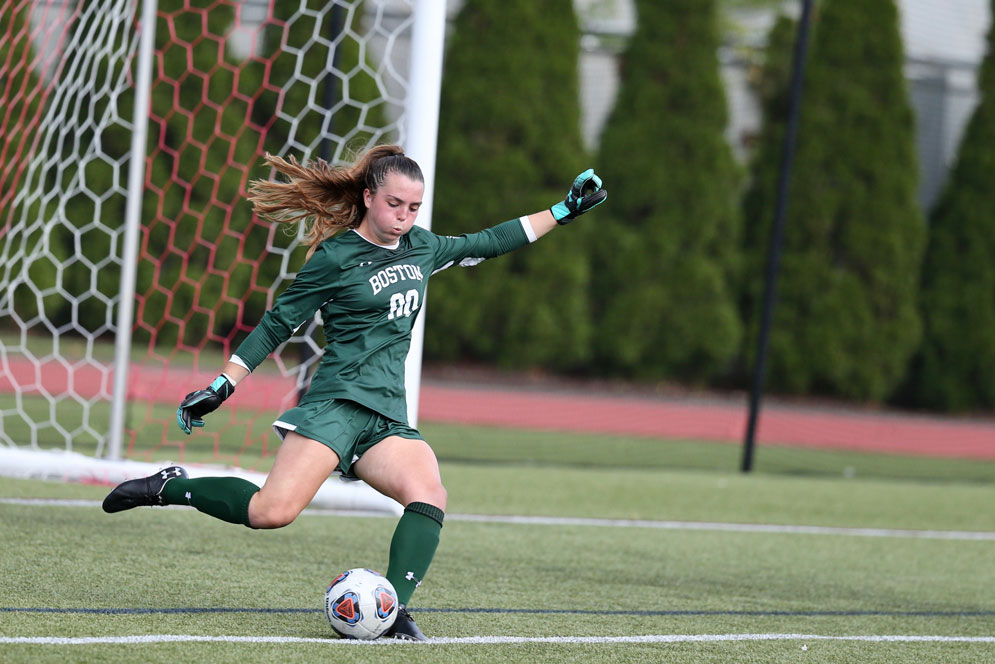 Goalie Morgan Messner (CAS’22) punts the ball in the September 2 win over UConn. Messner didn’t allow a goal during Patriot League games this season and leads the team with five shutouts. Photos by Tim Carey

With less than five minutes left in the first half of the October 20 Bucknell game, the women’s soccer Terriers had a breakthrough moment: a cross from the left pitch by Anna Heilferty (CAS’21) found Shannon Keefe (CGS’18, COM’20), who zipped past her defender and saved the ball from going out of bounds with a pass to Chloee Sagmoe (Questrom’20). With the opposing keeper bamboozled by the ball movement, Sagmoe found the back of the net.

The play was no coincidence: just days before, the Terriers had focused on their crossing and finishing during practice, and on game day, it came to fruition, as the goal sparked the team’s 2-0 victory over Bucknell in its last regular season home game.

The Terriers managed a similar feat October 27, when Hannah Wilcox (SHA’19) delivered the game-winning goal in the 78th minute of the Colgate game and a 1-0 shutout, bringing the Terriers their second Patriot League regular season title.

Now they’re preparing to host the Patriot League Tournament this weekend, for the first time since 2015. When they take on Army in a semifinal matchup on Friday, the team faces a formidable opponent: Army was one of only two teams the Terriers weren’t able to beat in conference play this season.

“You can keep getting better at this point in the season to change the course and the outcome of the game,” says veteran head coach Nancy Feldman, who was just named Patriot League Coach of the Year. “I don’t think we’ve yet reached our pinnacle. I’m really pleased with where we’re at, but I think there’s another level for us.”

BU’s season began with a five-game losing streak, which wasn’t much of a surprise. The Terriers have often faced difficult opponents early in the season in preparation for the long haul. In 2016, the Terriers dropped their first nine contests to non-conference opponents, but went on to tie for first place in the Patriot League, with an 8-1-0 record.

“We learned a lot playing those huge teams, and it made the transition to conference play so much easier,” goalie Morgan Messner (CAS’22) says of the early games. “I think there’s just ton of confidence across the backline now, and we believe in each other.”

“There’s a little bit of a doubt when you’re not getting the results,” says Feldman, who notched the 300th win of her 24 years as BU head coach September 26. “When you start to get the results, you start to lose the doubt…Things that weren’t going your way magically start to go your way.”

And this week they had more reasons to celebrate, with the announcement of the conference honors. A total of five Terriers claimed end-of-the-year accolades: Heilferty and Dorrie Varley-Barrett (CGS’17, Sargent’19) earned spots on the first team, while Chelsea Churchill (CAS’19) and tri-captain Libby Closson (CAS’19) were named to the second team. In addition to making the third team, Taylor Kofton (Sargent’22) took the Rookie of the Year Award.

The Terriers last won a Patriot League title in 2015. Last year, they fell to Bucknell 1-0 in a close semifinal match. For the BU seniors, a postseason victory would be especially sweet: a bookend to the Patriot League Tournament title they won as freshmen.