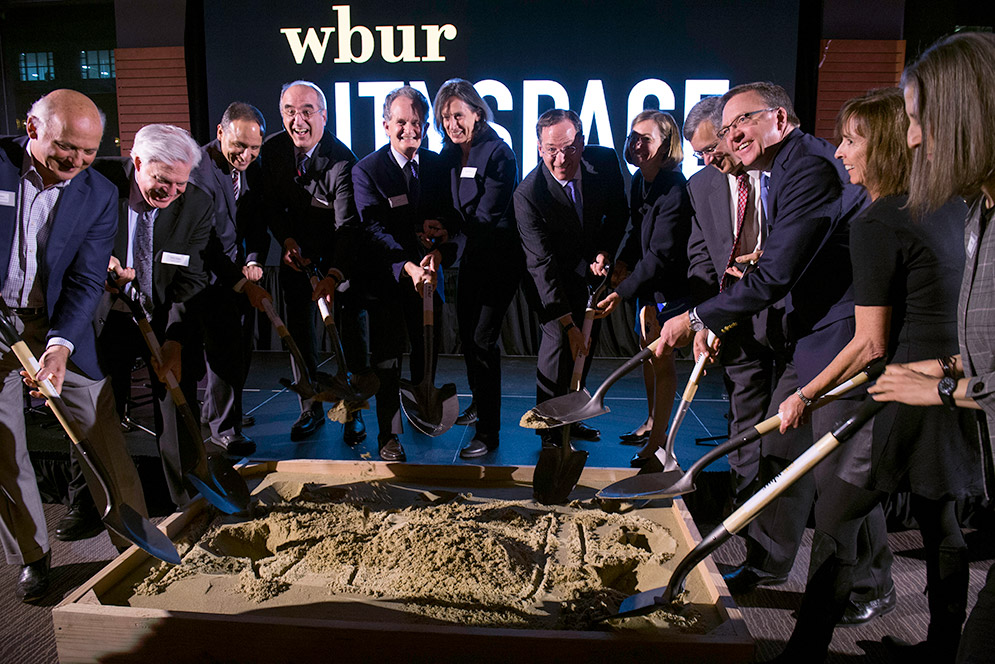 WBUR, Boston University’s National Public Radio station, celebrated the groundbreaking Wednesday evening of a new cultural events space, funded in part by the largest gift in the station’s history, a $5 million commitment from Jonathan Lavine, a co–managing partner of Bain Capital, and his wife, Jeannie. The venue, called CitySpace, is being built on the site of what had been Landry’s Bicycles, on the corner of Commonwealth Avenue and St. Paul Street (Landry’s recently moved up the street), and will host live radio broadcasts, political debates, and performances.

WBUR general manager Charlie Kravetz says the 7,500-square-foot space, which will have at least 240 seats and is expected to serve an estimated 30,000 people a year, will focus on discourse. “CitySpace is the logical extension of WBUR’s role in Boston,” says Kravetz. “WBUR is no longer just a radio station. It’s a multiplatform media organization that reaches people on air, online, on demand, and on stage.”

CitySpace, scheduled to open early next year, will produce up to 200 programs a year, including debates, interviews, readings, theatrical performances, and family programming, with all events streamed live and archived for on-demand access. Designed by the architectural firm CambridgeSeven, CitySpace will include a hydraulic stage that can be raised or lowered, robotic cameras and lights, and a 9-by-16-foot LED screen that will show documentaries and films. Floor-to-ceiling glass windows will allow passersby to watch the events inside, and the station plans to install benches and speakers outside the building.

“This will be the most technologically advanced convening space in Boston,” Kravetz predicts. “It will be beautiful in design and operationally efficient.”

WBUR has raised $16 million so far toward its goal of $20 million for the cultural events center. In addition to the $5 million commitment from Jonathan and Jeannie Lavine, the project received $2 million from the Barr Foundation in December, then the largest gift to WBUR.

Kravetz says Boston University has provided support for the project from the outset, noting that Robert A. Brown, BU president, embraced the idea of CitySpace five years ago when the two first discussed it.

He says the station is committed to partnering with Boston’s scientific, academic, business, cultural, and civic organizations. “We plan to harness the talent and brainpower in this city,” he says. “We hope to bring all that to its citizens.”