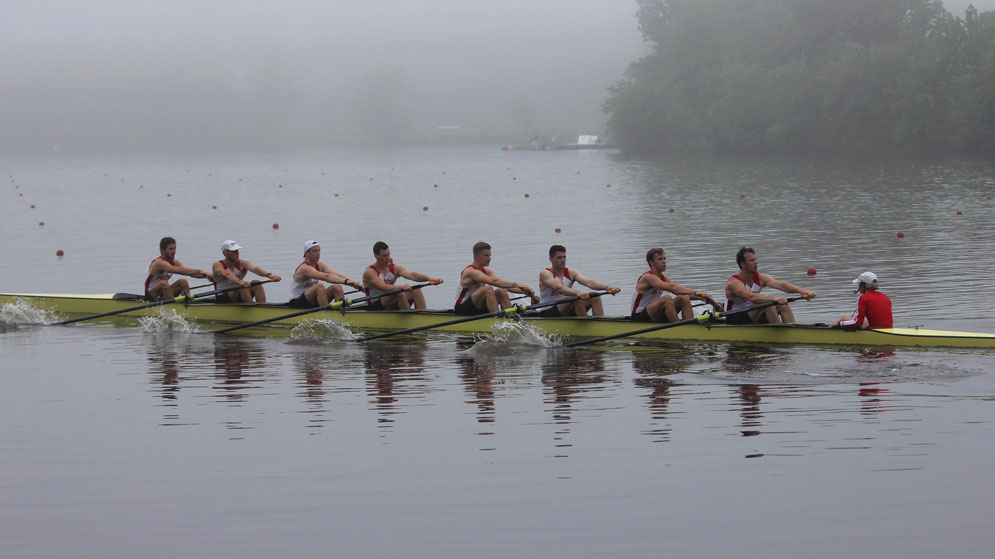 Sean Dooling (CAS’19) (far right) is the coxswain of the BU men’s rowing team. Coxswains are crucial to a rowing team: they direct the rowers, steer the boat, and motivate the crew when it’s time to up their game.

The BU men’s club eight boat had been inching up on Northeastern all race long during last year’s Head of the Charles Regatta, and as the boat approached the Cambridge Boat Club, Sean Dooling knew the Terriers could overtake the Huskies by attacking their port side. But he quickly decided the move wasn’t worth it, as it would force BU to make the outside turn coming around the last bend. Within the next 5 to 10 strokes, coxswain Dooling (CAS’19) decided to take the starboard—right-hand—side, which allowed the Terriers to gain the inside turn around Belmont Hill into the final stretch of the race. BU advanced—and won.

Passing Northeastern wasn’t what gave BU the race: it was Dooling’s strategic decision to claim the inside turn and reduce the Terriers’ time. The Head of the Charles is a head race, and unlike a sprint race, where boats race side-by-side, each boat begins at an interval and the boat with the best finishing time wins. Given that, the boats can try to overtake one another at any time, and all that maneuvering calls for a special rower.

“This is when a really good coxswain would come into play,” says women’s lightweight rowing captain Elise Gorberg (COM’19).

Coxswains are smaller than the typical rower, and during a sprint race, to the casual observer, it may appear that they’re not really doing anything. But at the Head of the Charles, theirs is often the most crucial role on the team.

The Head of the Charles is the world’s largest two-day rowing event, now in its 54th year. It’s held annually on the next to last two-day weekend in October—this year October 20 and 21. Its 61 events see 11,000 athletes rowing in 1,900 boats over a 3-mile course.

“It’s a big steering regatta, so you’re having the coxswains make the turns under full pressure,” says men’s rowing head coach Tom Bohrer. “If you’re catching up to somebody or you have to make another turn with another crew during a turn, it can get pretty frantic, so having everyone stay calm and move is really important.”

Coxswains are the steerers and directors of a boat, and the only team member who faces the crew. They are frequently called on to make critical split-second decisions, like Dooling’s move in 2017. At other times, the coxswain is responsible for motivating the crew to up their game, often during the final stretch.

“The Head of the Charles is a three-mile race, so you have to be very strategic about it,” says Julia White (CGS’18), a coxswain on the women’s openweight rowing team. “The last mile is when you really ask them to elevate what they’re trying to do and tap into a new level.” 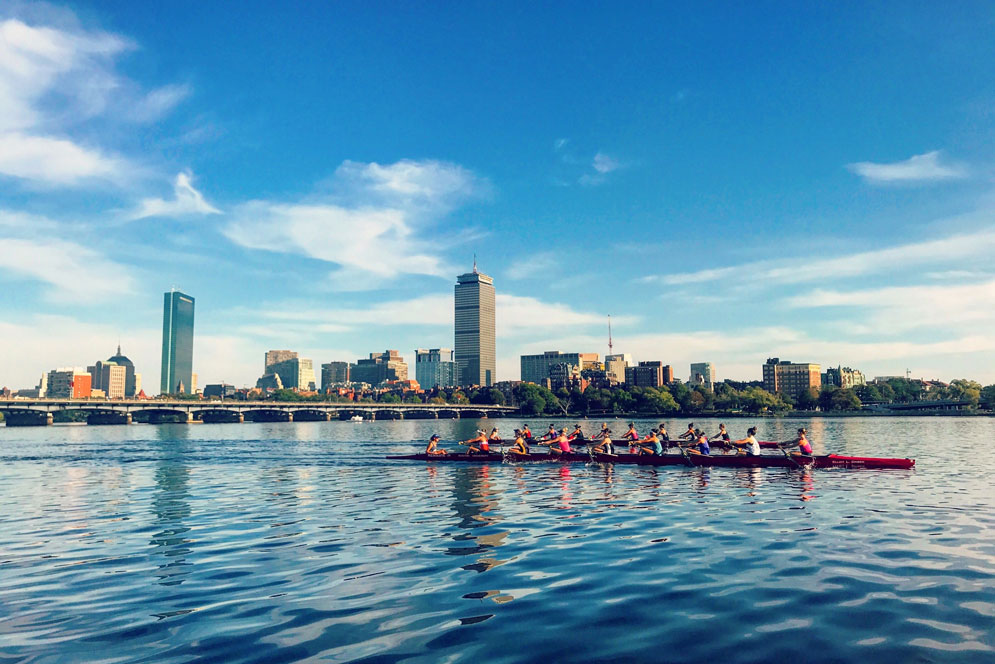 The BU women’s lightweight rowing team has been practicing on the Charles River for more than a month for this weekend’s Head of the Charles.

The Head of the Charles is famous for its tight and turn-heavy course, where every turn matters: a wrong wide turn can cost several critical seconds. “As a coxswain, you have to hit certain angles that will allow you to get through the turn the fastest,” Dooling says. “It’s definitely a hard course to steer.”

For BU’s rowing teams, the fall season is mostly about base development and boat skills in preparation for the spring, when they see most of their competition. With no BU crew competing in more than three fall races—women’s openweight competes in one, men’s in two, and women’s lightweight in three—the Head of the Charles is as an important check-in for the Terriers.

“We know how we’re doing internally,” says Madeline Davis, entering her second season as director of women’s rowing. “We know what our metrics are internally and how that compares to this time last year and the end of the spring, so this is a really good chance to see how we stack up against other crews.”

All three teams enter the 2018-2019 season on the heels of a successful spring season: the men’s team, led by Bohrer, finished tied for seventh in national rankings, en route to an eighth-place finish at the 2018 Intercollegiate Rowing Association (IRA) National Championship Regatta.

For Davis’ first year at the helm, the women’s openweight team finished just five points shy of the Patriot League championship. And the women’s lightweight team won silver at the IRAs and ranked first nationally for the first time in program history under the guidance of Malcolm Doldron.

“The race in and of itself is the standard of head racing,” Doldron says. “It’s an international race. It has something for everyone, whether it’s the challenging weather conditions to the turns for the coxswains to a ton of competitive athletes from all over the globe. We’re glad to be able to call it a home regatta.”

The 54th annual Head of the Charles Regatta begins at BU’s DeWolfe Boathouse, 619 Memorial Dr., Cambridge, on Saturday, October 20, at 7:45 am and continues on Sunday, October 21, also at 7:45 am. Find race days and times here. The Rowing Channel will broadcast the events live.

Terriers Psyched for 54th Annual Head of the Charles Regatta