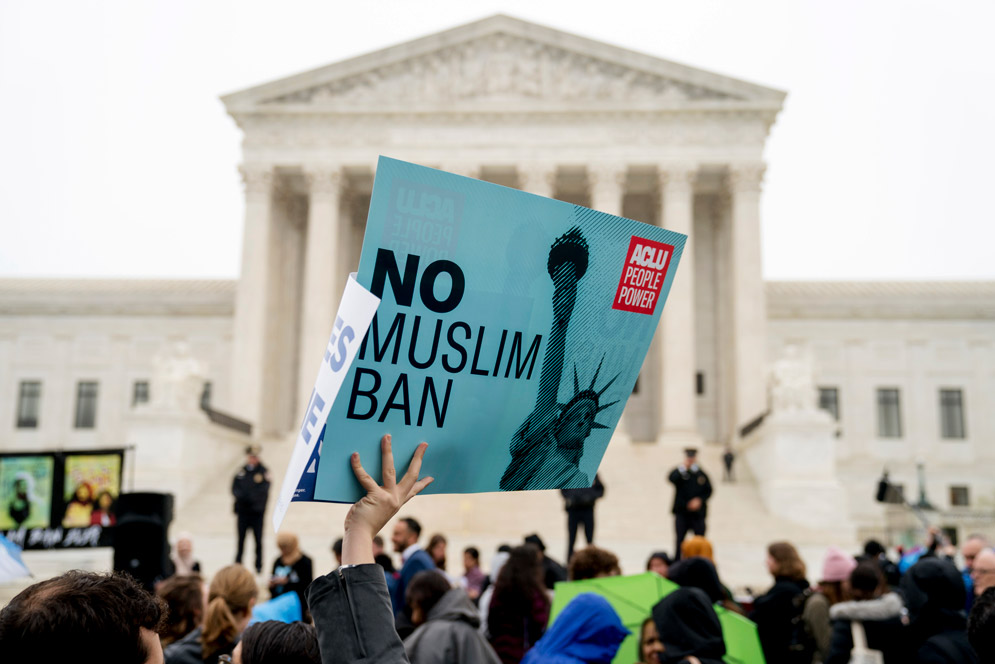 Protesters outside the Supreme Court on April 25, when the justices were hearing arguments on whether to uphold the Trump travel ban on several Muslim countries. On June 26, the court upheld the ban in a 5-4 vote. Photo by AP/Andrew Harnik

Kennedy, she says, “reminded executive officials of their oath to uphold the Constitution and urged them to abide by that oath.”

The court’s 5-4 decision OK’d travel restrictions on Iran, Libya, Syria, Yemen, and Somalia—all with Muslim population majorities—as well as Venezuela and North Korea. Legal challenges to the ban, including from the state of Hawaii and a Muslim group, did not object to restrictions on the latter two nations, alleging instead illegal religious discrimination against the Muslim countries.

This is the third version of the administration’s ban, and like its earlier iterations, it had been blocked by lower courts. Tuesday’s decision reversed those rulings and handed Trump a major political victory on an issue he’d campaigned for president on.

BU had opposed the ban, along with 30 other academic institutions, including all 8 Ivy League schools and fellow members of the Association of American Universities.

BU Today: Do you agree with the court’s legal reasoning?

Loor: I disagree with the reasoning upholding the ban, particularly in light of the Establishment Clause challenge. According to the First Amendment, the United States government cannot establish a preferred or an undesirable religion. This third version of this executive order does just that.

It creates a group of noncitizens who are disfavored and not permitted to enter the United States because of who and how they worship. Prior religious discrimination cases have inquired whether a reasonable observer would believe that the state action was prompted by religious animus. As Justice Sotomayor points out when she recounts candidate and then president Trump’s litany of anti-Muslim statements, the record is undeniable.

What factor most governed the court’s thinking—its approach to religious liberty, or the president’s executive authority, or some other ideological position?

I think Justice Roberts’ majority opinion upholding the travel ban was dictated by his view that the judiciary takes a highly deferential role to the executive branch in the regulation of noncitizens—in this case foreign nationals seeking visas at American consular offices. The majority held that the language of Section 1182(f) of the Immigration and Nationality Act governing the entry of foreign nationals “exudes deference to the President” and thus the court may only review the executive order under rational basis, where the government action is justified as long as it is rationally related to a legitimate state interest. In this case, the majority found that refusing to provide visas to foreign nationals from certain Muslim majority countries that the administration claims provide insufficient information for proper vetting was rationally related to national security.

In an unusual move, some of the justices read their dissents from the bench. What does that suggest?

Justice Sotomayor likely wanted to express the passion with which she disagreed with the majority in this case. Of course, all Supreme Court cases are important, but this may be one that we will be most referencing in history as a sign of this dark era in our country. My hope is that history will look at this [decision] with disapproval.

Challenges to the ban focused on the mainly Muslim nations rather than North Korea and Venezuela. Does that distinction make legal sense?

Yes. This distinction makes sense particularly as to the Establishment Clause challenge. It is important to remember that this was the administration’s third attempt at a travel ban.

The two prior versions of the executive order limited the entry of individuals from only Muslim majority nations. Plaintiffs knew that adding North Korea and Venezuela was merely a distraction from the discriminatory impetus for the visa restrictions.