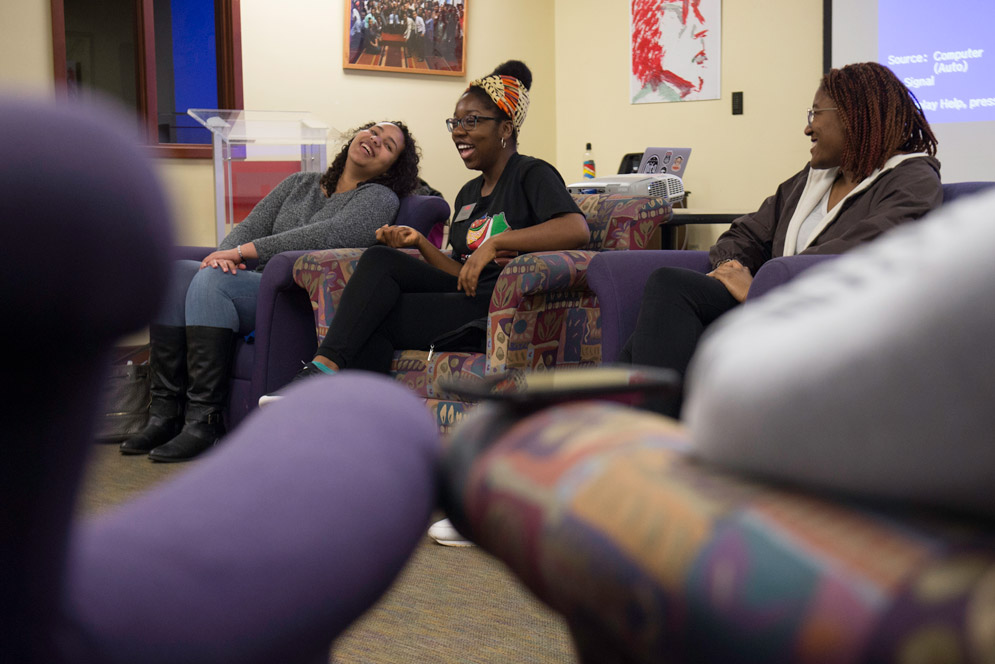 About 20 women gather in a CAS classroom on a recent Thursday evening for a Jeopardy! game night. The theme is revenge movies, and it was chosen to coincide with the release of Tyler Perry’s psychological thriller Acrimony, starring Taraji P. Henson. The revenge movie theme proves popular, eliciting lots of laughter as the women raise their hands excitedly, anxious to be the first to answer questions correctly and win prizes, like Acrimony posters and T-shirts. Among the categories are “iconic duos,” “lead actresses,” and “name that star.”

The evening is a meeting of Sisters United BU, a club aiming to empower young black and brown women at the University through mentorship and on- and off-campus events. Founded in 2011, it was officially recognized as a club by Student Activities this past fall. Club members say that it’s open to all women students, regardless of race.

“I shouldn’t even say that we have members—we have attendees,” says club president Ala Nmungwun (Sargent’18). “A lot of people become friends from coming to our events. Last year, we had a mentorship program where we specifically took people with two common interests and put them together. A lot of people met roommates, best friends, and classmates that way.”

The group strives to meet biweekly. In addition to fun events like Jeopardy! night and a Paint and Chill event, where a local artist helped members create their own paintings, Sisters United hosts discussions and panels focused on more serious topics or on academics. One recent program, Black Girls Abroad, held at the Howard Thurman Center for Common Ground, included a panel discussion among three students speaking about their experiences studying abroad.

One of those attending is Haby, a College of General Studies student who asked us not to use her last name. Haby had spent a gap semester in the Dominican Republic before coming to BU. “My experience helped me grow a lot as a person and kind of helped me realize what it means to be black, not only in the United States, but abroad, and what larger implications that has,” she says. “So I wanted to hear other people’s experiences and see if they connect to mine.”

Other evenings have focused on issues like sexual health and identity. The club hopes to host a program next year exploring mental health as it relates to black and brown women. Members also host collaborative events with other student groups, such as Brothers United and Umoja. In addition, the club sends out a newsletter to members with information about what’s coming up, opportunities in Boston, and a “Black Girl’s Bible,” a guide to navigating Boston.

“We’re really trying to offer programming that is relevant to what our members want,” Nmungwun says. “We have a lot of people who love to come out to game nights, but we won’t see them at discussions or panels, so it really depends on what a person is looking for.”

The overarching goal of these varied programs is to bring together young women who might not otherwise find one another on campus. “It’s definitely hard when you come into a university, or into any setting, and you’re a minority,” club secretary Shadae Leslie (COM’20) says. “You don’t necessarily see people like you everywhere you go.”

That is particularly true at a school like BU, where only 6.9 percent of the Class of 2021 is black/African American. Sisters United members says that clubs like theirs are important for fostering community.

“I know for me, I came from a school that was predominantly black and Latinx, so coming to BU was a different environment, it was like a culture shock for me,” says Leslie. “Having organizations like this make it more comfortable for me to feel like I belong.”

Other members agree. “There’s not really a large black population on campus at BU, and in my opinion, it can feel really lonely,” Haby says. “I don’t know how I feel on this campus at times, so being here surrounded by other empowering black women who have made it through the BU experience gives me hope that I can do it too.”

To learn more about Sisters United and upcoming events, visit the Facebook page or email sistersu@bu.edu.