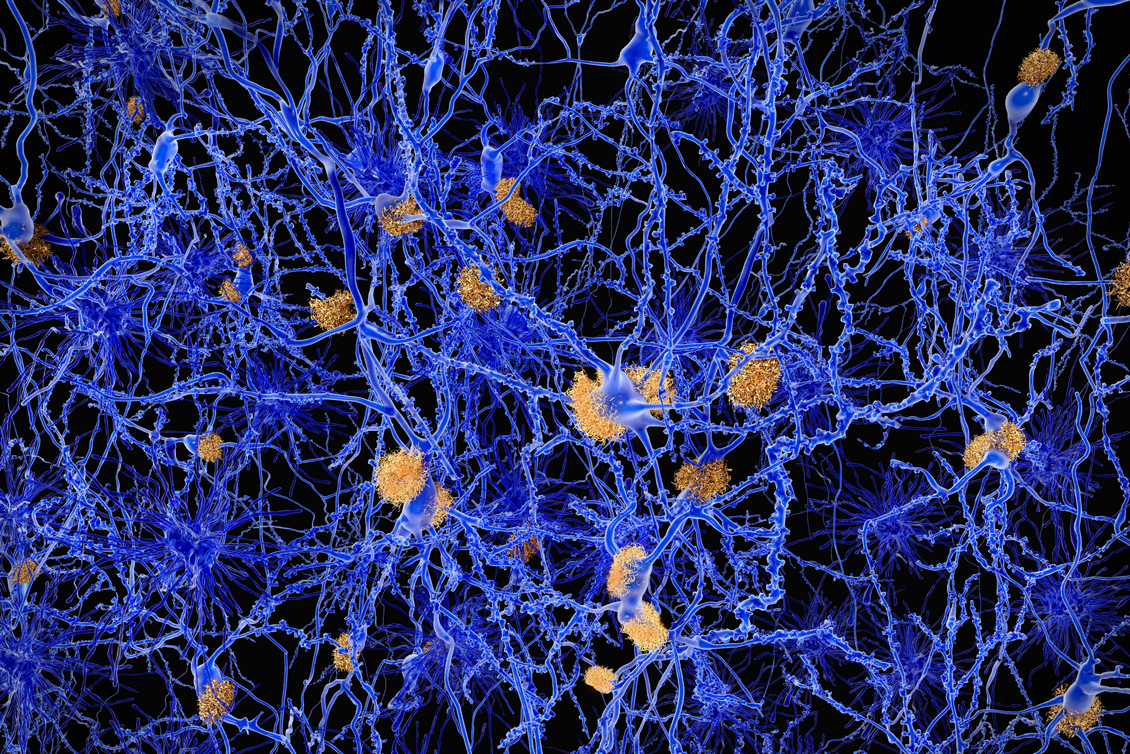 Amyloid plaques in the brain. Photo by selvanegra/iStock

Andrew Budson, a Boston University School of Medicine professor of neurology, has been attending the Alzheimer’s Association International Conference  for more than a decade, and it’s usually fairly routine. He catches up on the latest research, trades ideas and insights with other scientists from around the globe, and hopes that maybe there will be a hint about a new drug that could potentially slow the progression of the disease.

This year, finally, he heard what he’d been hoping for.

Midway through the July 2018 conference, Biogen and Eisai took the stage at Chicago’s McCormick Place convention center to present the latest results of a therapeutic that shows potential promise for slowing the advance of dementia and reducing the plaques in the brains of patients.

Budson, a physician scientist who has spent more than 20 years studying Alzheimer’s and caring for patients afflicted by it, sat and listened as the drug companies shared the results from the new research that would quickly rocket through the biopharma world.

“It was the most hopeful thing I’ve heard in years,” says Budson, who is associate director of the BU Alzheimer’s Disease Center and associate chief of staff for education at the Veterans Affairs Boston Healthcare System. “We haven’t had a drug approved for Alzheimer’s disease since 2003. And there’s absolutely nothing that slows down the disease. The current treatments for Alzheimer’s, drugs like donepezil (brand name Aricept), can ‘turn the clock back’ on memory loss by six to 12 months, but they can’t slow the speed at which the clock is ticking down. What’s so exciting about the preliminary analyses is that for the first time, ever, we have the hope—we have the preliminary evidence—that we might finally have a drug that can slow the rate of decline.”

Alzheimer’s, a progressive deadly brain disorder that destroys memory and other cognitive abilities, afflicts some 5.7 million people in the US and that number is projected to rise to nearly 14 million by 2050, according to the Alzheimer’s Association. Between 2000 and 2015, deaths from heart disease decreased 11 per cent while deaths from Alzheimer’s increased 123 per cent. Worldwide, nearly 44 million people have Alzheimer’s or a related dementia.

BU Research caught up with Budson in Chicago as he was leaving the conference and heading to a reading downtown of his latest book, Seven Steps to Managing Your Memory—What’s Normal, What’s Not, and What to Do about It (Oxford University Press, 2017), and talked with him about the buzz at the conference over the new findings, the caveats involved, and what has to happen before we’ll know if the drug, BAN2401, really works.

Why is this new result so important?

In addition to its potential importance to help patients, it also means that this research approach works. Once you have one drug working, similar medications—which may work even better—can be developed.

What was it like in the room when the findings were presented? People knew this was coming. There must have been a big crowd.

The room was totally packed. There may have been close to 1,000 people there. They only got this new data three weeks ago [July 5, 2018]. This was the first time they had talked about it. The conference organizers extended the session—it was on recent developments in therapeutics—so these data could be presented. During the scientific presentations that came before this one, people asked very few questions. They just wanted to get to this one. In the session just before it, the speaker himself said, ‘I think everyone’s waiting for the next talk.’”

How did the scientists in the audience respond to the drugmakers’ presentation?

People were cautiously optimistic. There have been other groups that have had results that were promising, but then the full data sets were analyzed and they ended up not being statistically significant.

If what they show in these slides actually stands up when the data are looked at more carefully and the subgroups are analyzed, I believe it will change how Alzheimer’s disease is treated and diagnosed because this study shows, unequivocally, that you can clear amyloid plaques from the brain.

This is different because, in addition to clearing the plaques, the finding is that the drug also actually slows down cognitive decline over 18 months.

If you have a medication that can slow down the rate of decline, then basically everyone with Alzheimer’s should be taking it.

Assuming that the full analyses look like the preliminary ones, I would put all my patients who have Alzheimer’s disease on this drug.

The scientists have to finish the analyses and, assuming the full analyses come out the same way as these preliminary analyses, Eisai and Biogen are going to be talking with the FDA about what additional studies they would require in order for the drug to be approved.

And the FDA may say they need one more study. I think it would be likely that they would say that they need replication. It was only the highest doses out of the five they administered that showed an improvement over the placebo. My guess is that the FDA would want them to do a new study with just the one or two highest doses over the placebo. And they would want to see that they came out definitively positive.

These studies are 18 months long, so we’re looking at least a couple of years before we will likely have an approved drug.