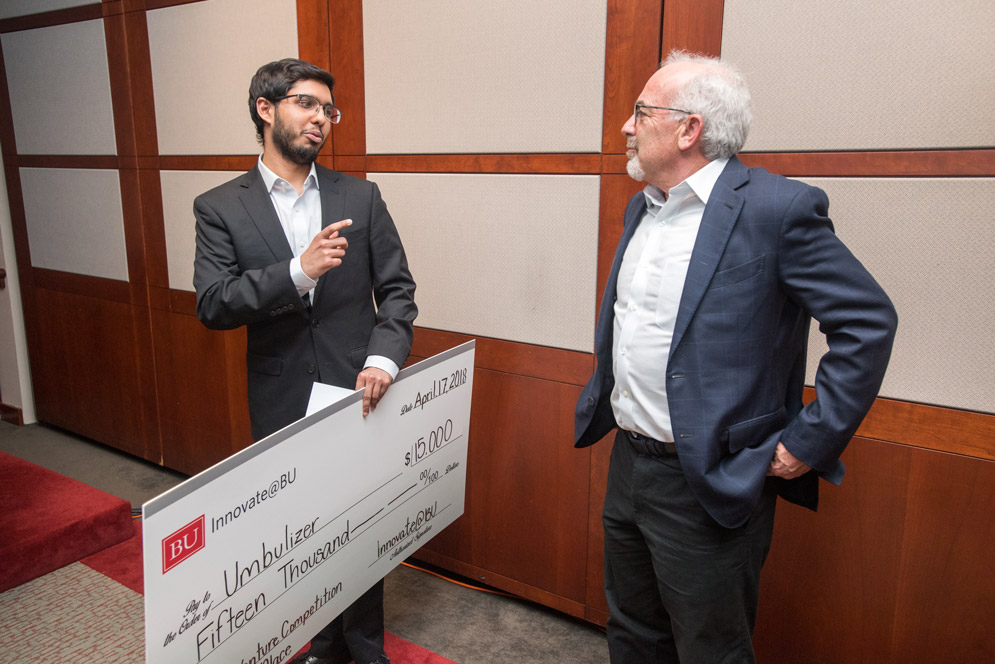 When biomedical engineer Shaheer Piracha was home in Pakistan last summer, he spent three days at a children’s hospital, where a friend’s two-year-old son with respiratory problems was fighting for his life. Piracha (ENG’17) and members of the child’s family took turns squeezing air into his lungs with a simple hand-operated ventilator called an AMBU bag (artificial manual breathing unit), because that’s all they had. There are very few high-tech ventilators in Pakistani hospitals, and those on hand often don’t work.

“What was touching was seeing 20 other family members and parents AMBU-bag their child,” says Piracha. “You were just counting as one passed away and another, and you knew death was coming, you just didn’t know when.”

His friend’s son lost his fight, and a grieving Piracha was left to ask himself how many children would survive such battles if Lahore’s hospitals were better equipped. He wondered if it were possible to build an inexpensive portable electronic ventilator that might not have all the bells and whistles found in First World medical settings, but would provide the basic functions and the proper amount of air without all the manual labor. He decided to build one with friends Sanchay Gupta, a Harvard Medical School student, and Hamza Khan, a Harvard Business School student.

On Tuesday, their device, the Umbulizer, won first place and $15,000 in the New Ventures start-up competition, which is one of the highlights of Innovation Week. The week is organized by Innovate@BU, the University’s $20 million initiative designed to foster student creativity and invention.

“It’s a large step for us,” Piracha says. “It will enable us to build 10 to 15 more devices that we can pilot-test and demonstrate that it is effective. It’s a big deal.”

The AMBU bag costs only $40, while a conventional respirator, even a used one, might cost $15,000, and that’s not counting the training and maintenance expenses that leave many of the machines in disrepair. Piracha and his partners plan to manufacture and sell their Umbulizer device in Pakistan and to make it affordable at $2,000, as well as easy to use, safe, reliable, and with inexpensive maintenance costs.

The well-attended competition at the Questrom School of Business began with 60 BU-connected entrants. Umbulizer was one of 6 finalists whose inventors presented their projects and answered questions from a panel of angel investors and venture capitalists.

The judges thought Piracha’s team had a product that was both viable and valuable. “What we liked about it is the fact that they’re solving a real health problem,” says competition judge Joshua Weiss (MET’82), a member of Hub Angels Investment Group LLC and Launchpad Venture Group and a Questrom strategy and innovation lecturer. “We felt they had something that really worked, that they were solving a real need, and that there was real demand for it.”

“For the past nine months I have been leading the project, bootstrapping, living on an air mattress,” Piracha says. “It’s been mostly my and my cofounders’ money that has been put into it, because we were brought in by the social cause. It is a dream of mine to make this a reality. And this money will go a long, long way.”

The crowd on hand agreed with the judges, and awarded Umbulizer the $1,000 audience prize as well. The other judges were Christine Mastrangelo (CGS’00, CAS’02), Cue Ball Capital partner and chief of staff; management consultant and angel investor David Voorhees of Launchpad Venture Group; and Kim Folsom, cofounder of Founders First Capital Partners, LLC and founder and CEO of Lift Development Enterprises, Inc.

Second place and $6,000 went to CauseEDU, which bills itself as crowdfunding for education and more. As pitched by founder and CEO Shironda White (Questrom’18), the web-based project tries to streamline education funding for students and donors by offering a central platform for crowdfunding and scholarships, as well as financial literacy for students.

Third place and $4,000 went to Flux Marine, presented by founder Daylin Frantin (Questrom’19), which aims to reduce the carbon footprint of the marine industry by providing affordable, reliable electric motors that could replace combustion engines.

Innovation Week continues today with events that include the AR/VR Festival, where many spaces at the BUild Lab will be commandeered to offer virtual and augmented reality experiences to attendees, from 10 am to 3 pm. Among Friday’s highlights is Innovator and Athlete: A Talk with Dr. Kim Blair, director of sports innovation at MIT, from 10 to 11:30 am at the BUild Lab.

Innovation Week culminates on Saturday with IDEA 2018: The Innovate@BU Conference, a one-day event for BU students featuring workshops and guest speakers. The all-day tickets are sold out, but students can still sign up for free afternoon tickets to events such as two workshops, the keynote by Johnny Earle, founder and CEO of Johnny Cupcakes T-Shirt Bakery, and a mix and mingle session. Students can register here by the end of Friday or show up in person on Saturday at 12:15 pm at Questrom’s atrium to pick up available tickets.

New Ventures Winner Offers a Breath of Life
0
share this