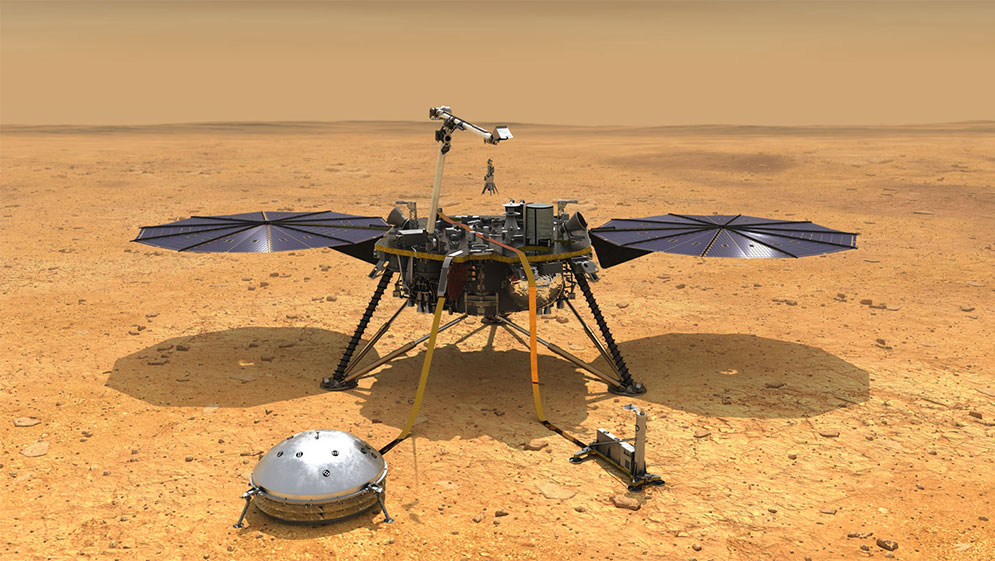 This artist’s concept depicts NASA’s InSight lander after it has deployed its instruments on the Martian surface. Note the smooth, flat ground, which defines the Elysium Planitia region of Mars where InSight landed. Image Credit: NASA/JPL-Caltech

It’s time you stepped up your Mars trivia knowledge—beyond that it’s the Red Planet, the fourth planet from the sun, and the one Matt Damon visited as astronaut Mark Watney in The Martian. On November 26, 2018, NASA landed a spacecraft on Mars for the first time in six years, and we were introduced to the term “seven minutes of terror,” a reference to how abruptly the craft, named InSight, slowed from 12,300 mph to 5 mph before landing gently on the planet’s surface.

Here is what NASA wrote on its Instagram post announcing the landing: “For the next two years, the spacecraft will use its unique tools to conduct Mars’ first thorough checkup since it formed 4.5 billion years ago.”

Nobody at Boston University is more fascinated than Paul Withers, a College of Arts & Sciences associate professor of astronomy and an expert on all things Mars. He is leading an experiment on NASA’s MAVEN orbiter around Mars, a spacecraft that will relay InSight’s data back to Earth. InSight will be the first craft to use a robotic arm to place scientific instruments on the surface of Mars.

“I’m tremendously excited to see InSight land on Mars!” Withers wrote in an email. “Studies of earthquakes on Earth have revealed so much about how Earth is structured and how Earth’s interior works, and InSight’s seismometer is going to do the same for another planet for the first time. Regardless of whether or not the interior of Mars turns out to be very similar to that of Earth, one thing is certain: there will be plenty of surprises and unexpected discoveries to amaze us all.”

But those discoveries won’t get back to scientists for 8.1 minutes. That’s how long it will take a radio signal to travel from Mars to Earth. (No, the Red Planet doesn’t have Wi-Fi.)

What else does NASA hope to learn? Here is what the agency has said:

And since NASA will be inundating us with its findings, here are a few other things worth knowing about Mars:

“By exploring Mars and beyond,” Withers says, “we discover how planets form from stardust, then change over their long history. This helps us better understand the world upon which we live and upon which we rely.”

Another Mars Landing! But What Now?