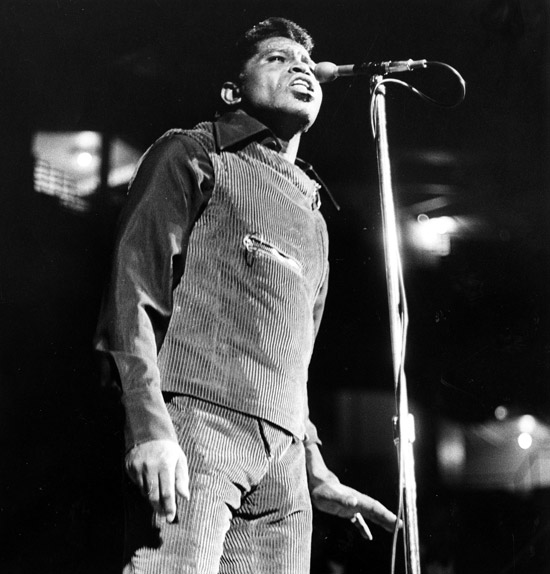 On a recent afternoon in a darkened College of Fine Arts classroom, students watch spellbound as legendary singer James Brown appears on a big screen, swaggering and spinning across the stage, singing classics like “Cold Sweat,” and “I Got You (I Feel Good).” The grainy video is from a concert at Boston Garden on April 5, 1968, and America felt anything but good that night. Martin Luther King, Jr. (GRS’55, Hon.’59) had been assassinated the day before, rioters were burning cities across the country, and the nation seemed to be coming apart. Boston Mayor Kevin White (Hon.’74) convinced Brown to go ahead with his concert—and found the money to broadcast it live on local TV in an effort to keep the city from exploding in violence.

“The Boston Garden concert was a central moment in James Brown’s career,” Victor Coelho, a CFA professor of music, tells the students in his summer class, R&B, Motown, and Classic Funk: Soundtracks of Empowerment and Civil Rights. Coelho uses Peter Guralnick’s classic book Sweet Soul Music: Rhythm and Blues and the Southern Dream of Freedom as the bass line as he explores how the work of artists—including Otis Redding, Sam Cooke, Marvin Gaye, and George Clinton—influenced and reflected the struggles of African Americans in the 1950s, ’60s, and ’70s.

Just four months after the Boston Garden concert, Brown released “Say It Loud—I’m Black and I’m Proud,” a stripped-down single that gave voice to African Americans in a way no one had before. “Now he’s using words he’s hearing in protests, in speech on the streets,” Coelho says. The song held the top spot on the R&B chart for six weeks and sent music in a new, harder-edged direction, much as the rhetoric of the civil rights movement was giving way to the raised fists of Black Power.

Brown, who died in 2006, “admired Martin Luther King, Jr., very much, but was not a person who felt that passive resistance was a way to achieve their goals,” Coelho says.

Coelho, director of BU’s Center for Early Music Studies, is an accomplished musician himself: he is a guitarist with the touring Rooster Blues Band and a lutenist and codirector of the early music group Il Furioso. He not only places the music he’s teaching in the class in a social context but identifies how changing times transformed the music, such as driving Brown toward a harder-edged sound. In class, he has a Fender Stratocaster plugged into a small amp off to one side and clearly relishes the moments when a musical point of discussion—that “chunky B-flat chord” in a Brown song or Miles Davis’ classic “So What” riff—gives him an opportunity to run over and play.

“I have never had a teacher who shreds the guitar to explain something!” says Carissa Mastrangelo, a rising senior at Kimball Union Academy in Meriden, N.H., who is taking the course through the BU High School Honors Program.

An aspiring singer-songwriter, she chose the course after being turned on to the soul music/civil rights connection by the Oscar-winning Ray Charles biopic Ray. Coelho “is always upbeat and his excitement towards the topic makes it even more interesting to learn,” she says.

“As a musicologist, I always approach the courses first and foremost as music, not as a cultural phenomenon,” Coelho says.

Coelho says it’s not necessary for students in the class to have a background in music. Within a few weeks, they’ve picked up the vocabulary and their ears are sharper, he says, adding that, with streaming services like Spotify, it’s much easier and faster to demo the array of influences around a song or an artist.

“I signed up for this class because I knew very little about R&B or funk, and I wanted to change that,” Sydney Neugebauer (CAS’19, CFA’19), a bassoonist, says. “I’ve definitely gained a new appreciation for these genres and the historical context that produced them. I’ve also found intrinsic value in analyzing popular music, especially the way styles and genres evolve and are shaped by current events, record companies, and the individual artists themselves. Popular music merits this kind of intense study and discussion, and it’s also just exciting and energizing to learn about.”

On this particular day, the class has a special drop-in guest, Kenneth Elmore (Wheelock’87), associate provost and dean of students and a big James Brown fan, who recounts for the students seeing funk legend George Clinton perform at Madison Square Garden in the 1970s. Coelho and Elmore also talk about how Brown’s music, especially the hard funk of “Payback,” became a favorite sample source for rappers.

Brown’s mercurial personality and dictatorial leadership of his bands are noted, too, as Coelho unspools some early performance videos. “Look at the drummers: they look like they’re having a horrible time,” says Mastrangelo. “It makes me wonder, how did he get along with the band?”

“He didn’t,” Elmore says with a smile.

The social and political aspects of Brown’s work have to be considered in any study of his music, Coelho says before class, especially today, “with so much confrontation going on now, with Black Lives Matter and with racism rearing its head now stronger than I’ve seen in my life.”

By the time he made “Say It Loud,” Coelho says, “James Brown had begun to alter his sound toward something that was more militant, that was a more powerful voice about blackness and pride. And his own personal problems notwithstanding, the James Brown repertory is one of the most powerful voices of that generation.”

Prof. Victor Coelho assembled this playlist as a sampler of the songs and artists featured in the Soundtracks of Empowerment class; think of it as a syllabus with a beat.