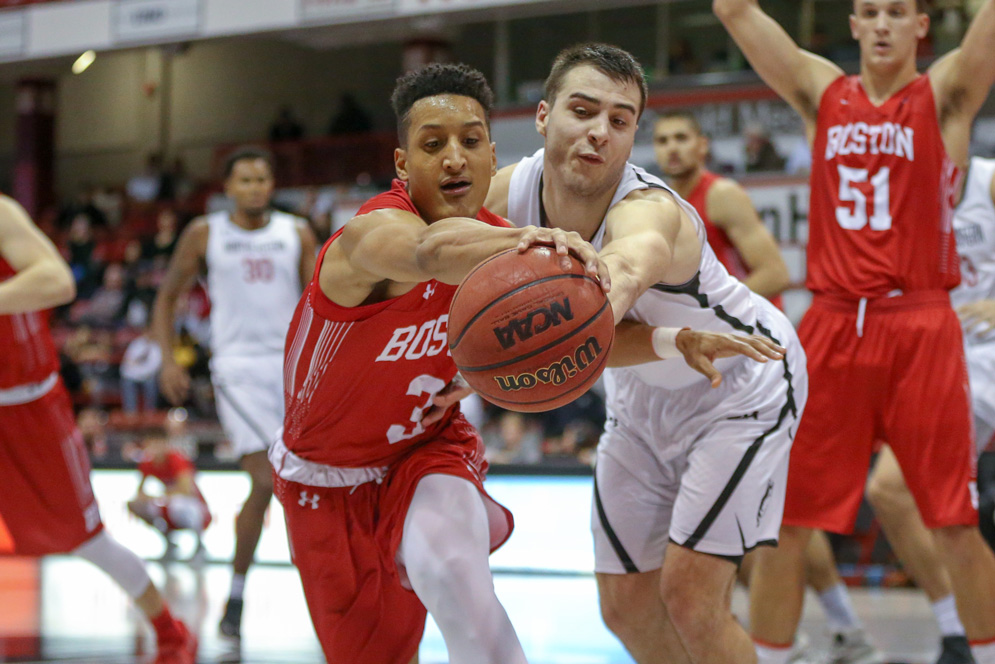 The Terriers came away with a 77-74 win over Northeastern on Tuesday night after overcoming a 12-point deficit in the second half.

For the past nine seasons, the Boston University men’s basketball team has faced Northeastern in the season opener, and every year it’s been a close game. This year was no different, as BU overcame a 12-point second-half deficit to beat their Beantown rivals, 77-74.

Now with that nail-biting tip-off behind them, the Terriers are looking to prove that their resiliency in the season opener was no fluke when they host Vermont Friday night.

“I’m excited right now because this may be the hardest working team we’ve had, in terms of guys putting extra work into their game outside of practice,” head coach Joe Jones says. “There’s a higher level of love for the game of basketball right now than I’ve seen in the past.”

Last season, the Terriers found themselves stuck in the middle of the pack—a fifth-place finish in the Patriot League—after injuries to starters Cedric Hankerson (Questrom’16, MET’18) and Walter Whyte (CGS’19) plagued the end of the regular season. When they returned, BU won three in a row, only to get crushed by Bucknell, 90-59, in the Patriot League Tournament semifinals.

Starting this season, those injury bugs are back: Whyte, again, is expected to be out for four to six weeks with a bone bruise on the left foot—the same injury that sidelined him last February.

“We’re kind of used to it,” Jones says. “It’s next guy up. We’re just trying to focus on guys that are healthy and trying to make sure that guys who aren’t healthy are getting everything they need, so we can try to get them back as fast as we can.”

With the graduation of a Bucknell superstar trio that included the last two conference Players of the Year, the Patriot League is considered wide open this season. The Terriers were picked to slide up a spot and finish fourth in the preseason poll, but the coach’s expectations are a lot higher.

“We’re expected to win championships here,” Jones says. “That’s what we all play for.”

After losing six players and adding seven—six freshmen and a junior walk-on—the Terriers enter the season with a completely different roster. In the season opener, it didn’t take long to realize that Jones was still figuring out how to manage his rotation and who deserves playing time: in the game’s first eight minutes, all 11 players had already been on the court.

“We are not approaching this like we’re young,” Jones says. “We will never use that as an excuse, and they know that.” He says that in his head, he understands that things are going to take time. “I think you might have some more patience, but the expectations are expectations.”

With tricaptain Kamali Chambers (CGS’17, COM’19) the lone senior on the roster, BU is as young as a team can get, and that means underclassmen have to step up.

The freshmen played a combined 91 minutes on Tuesday, in part because of the experienced players’ foul troubles. Tricaptain Tyler Scanlon (CAS’20) says their progress has been remarkable.

“You get to see progress from our first practice on September 25 through now, and you’ll see throughout the season that these guys literally learn things every day,” Scanlon says. “They’re learning so fast, and I’ve been impressed with a lot of the guys. They’ve adapted really quickly.”

Redshirt freshman Alex Vilarino (CAS’20) says the group has a single-minded focus on improving: “We’re just trying to be the best group that we can possibly be as a whole and trying to do special things here,” he says.

Without a lot of veteran leadership, that everyday attitude of hard work will be the key to success, players say. It can be difficult, especially with such a young roster, adjusting not only to the physicality of college basketball, but also to the mental component that comes with the season’s grind.

“Staying even-keeled and keeping the same attitude regardless of your circumstances is really important—staying level-headed and ready to go,” Scanlon says.

Men’s Basketball Goes Up against Vermont in Season Home Opener