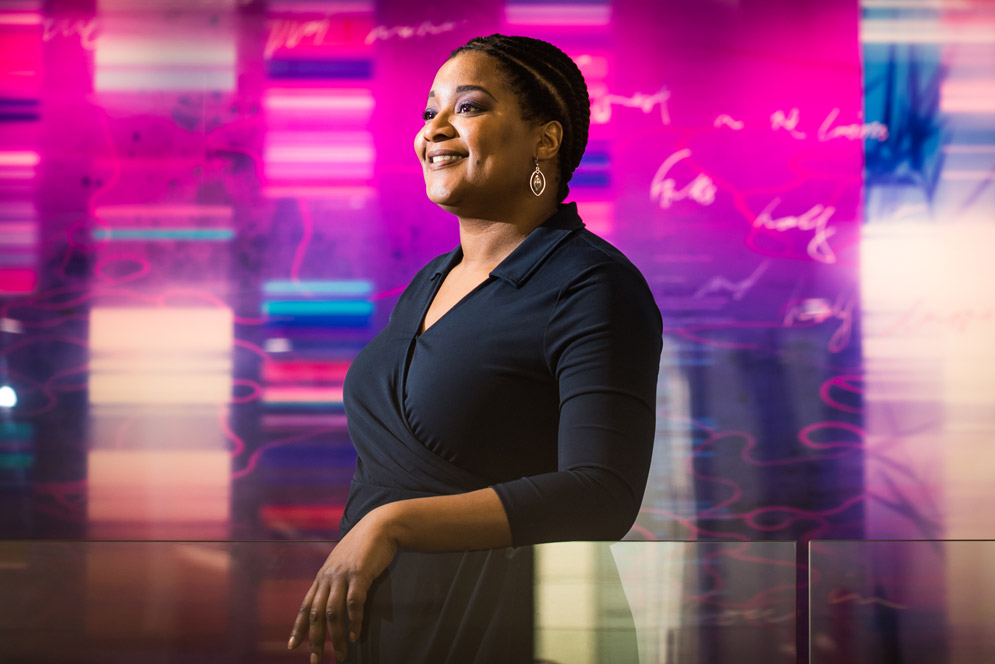 Malika Jeffries-EL researches “organic semiconductors,” the processing and electronic properties of which make them useful in technologies from LEDs to solar cells. Photo by Jackie Ricciardi

It’s official: Malika Jeffries-EL belongs to the 2 percent. She has been named an American Chemical Society (ACS) Fellow, an honor extended to just 2 percent of the ACS’s 163,000 members.

Jeffries-EL, a Boston University College of Arts & Sciences associate professor of chemistry, won the lifetime designation largely for her research into organic semiconductors, materials used in an array of technologies. They combine the processing properties of polymers with the electronic properties of semiconductors, says Jeffries-EL, who also has a joint appointment with the College of Engineering’s materials science and engineering division.

She says the fellowship recognizes her work “diversifying the chemical workforce through mentoring and training students” and for 18 years of service to the ACS, which has included serving on several committees.

“Professor Jeffries-EL is being recognized for the synthesis of novel organic semiconductors and their use in applications, including light-emitting diodes and solar [cells],” the ACS said in a statement. Jeffries-EL says the semiconductors are also used in certain types of transistors and sensors used in life sciences.

Besides the “publicity and the honor of being named” a fellow, the ACS said, the award includes an honorary ceremony during the ACS’ national meeting August 2018 in Boston. Jeffries-EL is one of 51 fellows named this year.

BU’s only other ACS Fellows are Morton Hoffmann, CAS professor emeritus of chemistry, and Catherine Costello, a William Fairfield Warren Distinguished Professor of biochemistry at the School of Medicine.

This is the second time Jeffries-EL has been honored by the ACS. She received its WCC Rising Star Award, given to women scientists who “have demonstrated outstanding promise for contributions to their respective fields” in 2012. Winners of that honor make presentations at the ACS national meeting and get $1,000 in travel reimbursement.

Jeffries-EL earned her bachelor’s degree at Wellesley and her PhD at George Washington University. In 2009, she received a National Science Foundation CAREER Award, the NSF’s most important prize for junior faculty, recognizing “innovative research at the frontiers of science and technology.”

The Washington, D.C.–based ACS, which is chartered by Congress, describes itself as the world’s largest scientific society, with members in more than 140 nations. Founded in 1876, it advances chemistry by publishing peer-reviewed journals and promoting collaborations among members.