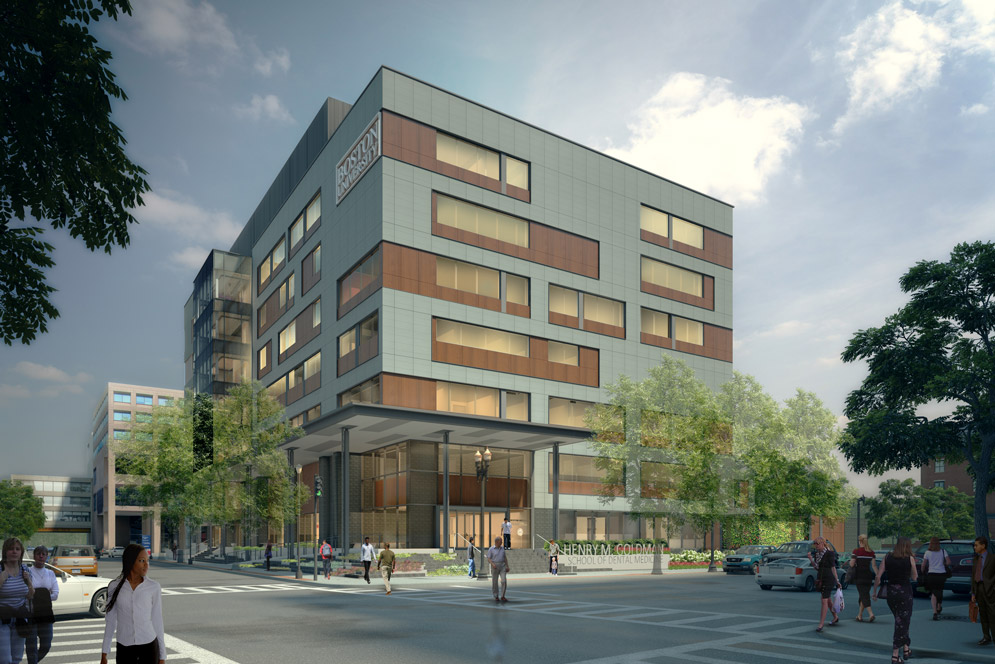 A rendering of the completed Henry M. Goldman School of Dental Medicine. Images courtesy of SmithGroupJJR

A major three-year, $112 million renovation of Boston University’s Henry M. Goldman School of Dental Medicine is expected to begin shortly, and when it’s complete, the school will look almost unrecognizable.

Contemporary sheathing and new windows will freshen up the building’s exterior, while the interior will be mostly gutted and reconfigured to draw in natural light and create more open spaces. A seven-story addition will be built along the west and north sides of the building. Patient treatment areas will be designed to accommodate cutting-edge technology, and a large new auditorium is in the works. During the renovation, classes will be held as scheduled and patients will continue to be seen, although some departments and offices will be moved to temporary spaces while the work is being done.

“The Medical Campus is delighted that the dental school will now begin the construction of the building that they have been planning for a decade,” says Karen Antman, dean of the School of Medicine and provost of the Medical Campus. “The architecture is striking, the clinics will be state-of-the-art, and the students will have modern student study and relaxation space.”

When the school moved to its present home at 100 East Newton Street in 1970, the building was only three stories high. In 1973, four stories were added, and today the building is “maxed out,” says Jeffrey Hutter, Spencer N. Frankl Professor in Dental Medicine and dean of SDM. Formally known as the Lawrence J. and Anne Cable Rubenstein Building, it’s home to more than 800 students and 300 faculty, as well as staff and volunteers. Some 33,000 patients receive care there every year.

“It’s clearly something we need,” Hutter says. “This facility has served the school well, but we have grown out of it. It’s going to right-size our building.”

When the conversation about a renovation first began, he says, architectural firm SmithGroupJJR surveyed peer dental schools and found BU at the bottom in terms of square footage per students and faculty. “I tell the students, ‘This will add value to your diploma,’” he says.

When completed, the four-phase project will have added an additional 48,000 square feet to the building without substantially expanding its footprint. Since space is hard to come by on the Medical Campus, this way of expanding makes the most sense, Hutter says. Before the project began, the school held multiple town hall meetings for the community. “The goal is to put the least amount of disruption on the patients, students, and residents,” he says.

Phase I, which began with site mobilization on February 24, will see a new first floor student and resident lounge and study area as well as a new patient entrance on the corner of East Newton and Albany Streets. Hutter says he’s excited about the school’s gaining a more visible “front door” on Albany Street, in the heart of the South End. The expanded building will almost abut a new 1.6-million-square-foot life science and technology office complex called Exchange South End, which was announced last fall by Boston developer Abbey Group. The existing SDM entrance at 100 East Newton Street will remain open for students, residents, faculty, and staff.

Patients using the new Albany Street entrance will be greeted by receptionists and proceed to a new patient elevator bank, with two elevators. Previously, everyone in the dental school relied on just two elevators (which will also be renovated, bringing the total to four). The first floor will be home to a new lounge and collaborative study space for students and residents, along with a new main patient waiting area.

Upstairs, teaching and clinical space is expected to increase by 60 percent, and classrooms and labs will expand by 14 percent. An existing cafeteria is being transformed into a 140-seat auditorium and the school’s Simulation Learning Center will be moved from across the street (650 Albany Street) to the third floor of the Rubenstein Building.

The school teaches and uses the Group Practice Model, meaning teams of dentists and specialists practice and collaborate to treat patients. The building’s 10 new group practice spaces, made up of 10 patient treatment rooms each, are slated to become more comfortable and flexible. “One thing we stressed—any patient who comes into the school, we treat like they were walking into the best private office in the city of Boston,” Hutter says. “Now you can look outside, there are larger spaces, it’s the whole experience.”

The building will receive a terra-cotta cladding that will cover the existing concrete exterior, with a large expanse of glass added at the entry level. The seven-story addition will tie seamlessly to the existing structure with brick of a similar color and a glass curtain wall.

Despite the short-term headaches that come with a renovation of this size, students are eagerly anticipating the new space. “My classmates can’t wait,” says class president Sloane Kaminski-Ditzel (SDM’18). “Nowadays, everything in dentistry is becoming digital, and BU is leading the way in dental education and adapting this modern technology.

“It’s really nice that the building will be catching up.”

There are 4 comments on New, Improved Digs in Store for Goldman School of Dental Medicine

New, Improved Digs in Store for Goldman School of Dental Medicine
4
share this