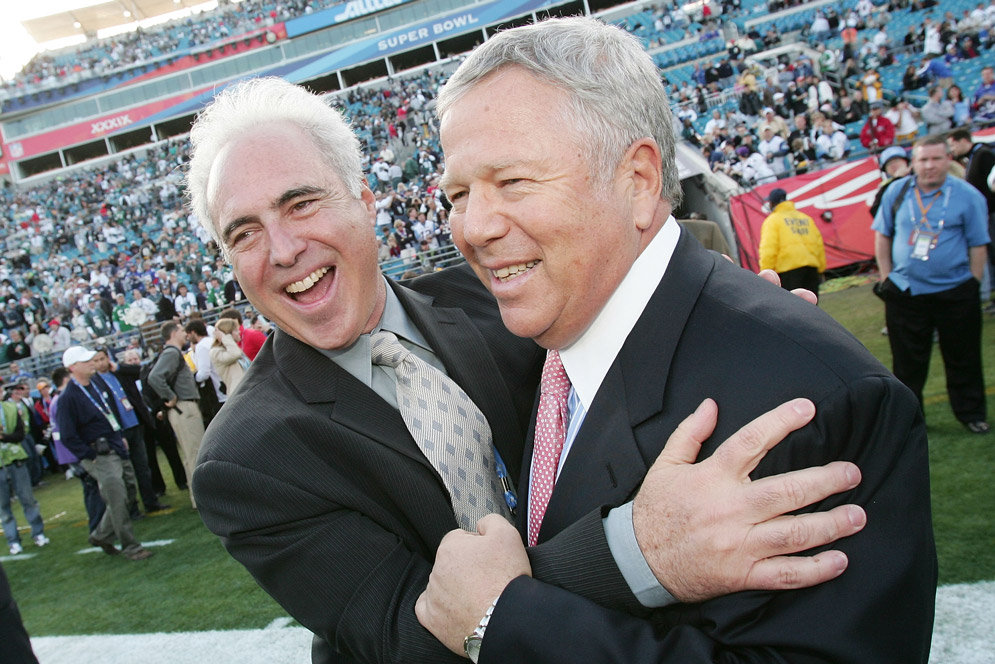 BU has ties to this year’s Super Bowl, somewhat surprising since the University no longer has a football team. The owners of this year’s contenders, the New England Patriots’ Robert Kraft and the Philadelphia Eagles’ Jeffrey Lurie, have degrees from BU. Kraft received an honorary degree in 1995 and Lurie a master’s in psychology from the School of Education in 1975.

The two gridiron rivals were Patriots fans growing up in Brookline (Kraft) and West Newton (Lurie) and are said to be close friends, despite competing to buy the Pats in 1994: Kraft won. They also met as challengers at Super Bowl XXXIX in 2005: the Pats won.

The Patriots aren’t Kraft’s first team. The Kraft Group CEO and chairman once owned the World TeamTennis league’s (now defunct) Boston Lobsters, which played at Nickerson Field in the 1970s. “If we’ve had success with the Patriots, it’s in part because of the lessons I learned there,” Kraft told Bloomberg last May. “We played in Nickerson arena, which was owned by Boston University. I would advertise and bring in people to watch our tennis team. But all the parking revenue and the concessions revenue went to the university. I’m going, ‘What kinda dummy am I? I’m bringin’ them in. And all we’re getting is ticket revenue.’”

Kraft said that experience taught him that you have to control your venue, and the lessons he learned were a driving force in his purchase of Foxboro Stadium in 1988, before he even owned the Patriots (that stadium was demolished in 2002 and replaced by the Patriots’ current home, Gillette Stadium).

In the five years before Kraft bought the team, the Patriots won just 19 of 80 games and never made it to the playoffs. During the Kraft era, the team has qualified for the playoffs 19 times (17 as division champions). Under his leadership, the Pats have recorded at least 9 wins in 21 of 24 seasons and taken more division titles and conference crowns (8) than any other NFL team. In 2016, the Patriots claimed their fifth Super Bowl championship.

Kraft, who has a bachelor’s from Columbia and an MBA from Harvard, received an honorary Doctor of Laws from BU in 1995. Others receiving honorary degrees that year included John R. Silber (Hon.’95), BU president emeritus and former chancellor, and Tony-winning actor Jason Alexander (Hon.’95).

Lurie attended the first Patriots game ever (a loss to Denver) in 1960 as a nine-year-old and eventually became a season ticket holder. Back then, the Pats didn’t have a home field and would play at Nickerson, Fenway Park, Harvard Stadium, and BC’s Alumni Stadium. Lurie, an avid Red Sox fan, earned an undergrad degree at Clark University and a PhD at Brandeis University. He was once a BU adjunct assistant professor of social policy.

Lurie’s grandfather founded the General Cinema movie chain, later the now-defunct Harcourt General, Inc., a $3.7 billion conglomerate based in Chestnut Hill. Lurie left academia in 1983 to work for the family business as a liaison between General Cinema Corporation and the production community in Hollywood. He founded Chestnut Hill Productions in 1985, which was responsible for a string of Hollywood movies and TV shows. Screen Pass Pictures, a nonprofit he later formed, produced the 2010 documentary about the 2008 financial crisis, Inside Job, winner of an Academy Award for Best Documentary Feature.

Lurie switched his football allegiance in 1994 when he bought the Eagles. Under his ownership, the team has had the most successful era in franchise history: eight National Football Conference (NFC) East titles, playing in six NFC Championships, and a Super Bowl appearance in 2005. He constructed two new facilities for the team in South Philadelphia: the NovaCare Complex (2001) and Lincoln Financial Field (2003).

In 2017, Lurie launched the Eagles Autism Challenge, a fundraising effort to address the complex medical and scientific issues associated with autism. Lurie was inspired by his younger brother, who is autistic.

The colorful franchise owner has a penchant for dancing with his players.

The Eagles are widely considered to be Sunday’s underdogs, although Pats quarterback Tom Brady doesn’t see it that way. In a recent NFL Network interview, Brady described the competition as “well-coached. They’re good in all three phases. They play complementary games. They do a great job. There’s no underdogs in the Super Bowl. They’re the first seed in the NFC. Man, they’re 13-3. They had an incredible season. I don’t buy into any of that. I think they’re as dangerous as any team in the league. It’s going to come down to whoever plays the best, and hopefully it’s us.”

No matter who wins, BU can lay claim to some reflected glory.

The 52nd annual Super Bowl is this Sunday, February 4, at US Bank Stadium in Minneapolis. Kickoff is at 6:30 pm, and the game will be broadcast live on NBC.