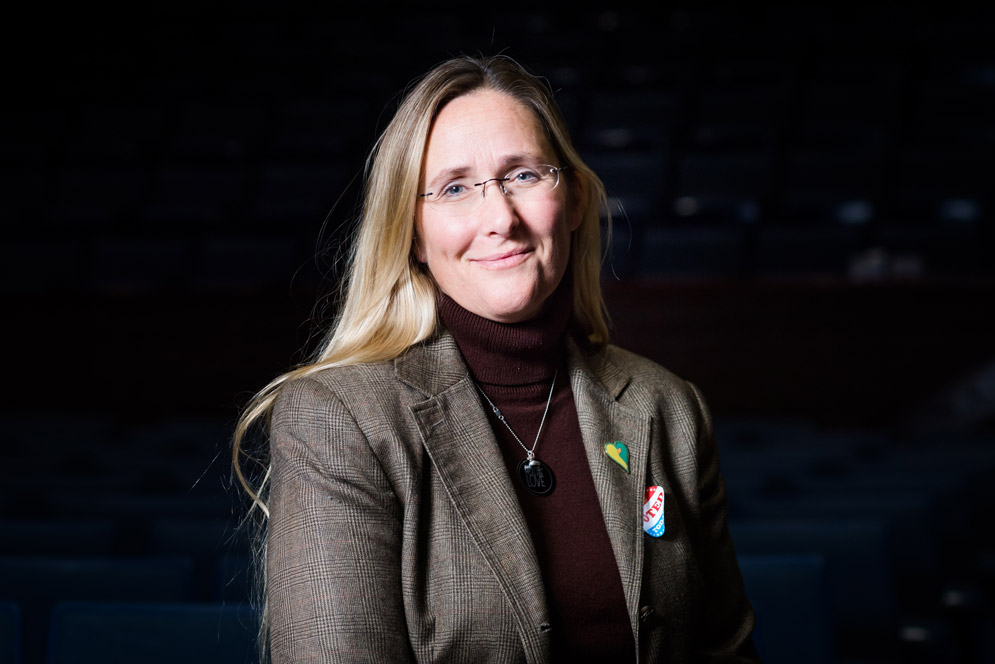 After her son’s murder in the Sandy Hook Elementary School shootings on December 14, 2012, Scarlett Lewis (COM’90) created a foundation to promote social skills teaching for troubled youths, like the gunman. Photo by Jackie Ricciardi

The last photo taken of Jesse Lewis shows the six-year-old squinting into the mid-December sun as he’s dropped off at school. On the nearby family car, he had finger-scrawled “I LOVE YOU” in the frosty coating. Less than an hour later, the first grader was dead.

Jesse, along with 19 other children and 6 adults at Sandy Hook Elementary School in Newtown, Conn., was shot to death on December 14, 2012, by 20-year-old Adam Lanza, a former student at the school. As Lanza paused, either to reload or unjam his rifle, Jesse shouted at schoolmates to run while he stood by his teacher. Six made it out.

Then Lanza shot Jesse in the forehead.

It’s six years later, and on a wet and blustery fall day just over an hour north of New York City, 250 teachers and administrators in Central Valley, N.Y., are staring at this last photo of Jesse on an auditorium screen. To them, the Sandy Hook massacre remains a but-for-God’s-grace abstraction, the deadliest shooting at a K-through-12 school in US history. But their speaker on this morning is Scarlett Lewis, Jesse’s mother, and to her, displaying her son’s photo is part of her crusade to prevent another Sandy Hook.

“If people can learn to hate, they can be taught to love, for love comes more naturally to the human heart than its opposite. There is no mass murder gene,” Lewis (COM’90) tells the silent crowd in Monroe-Woodbury High School’s cavernous auditorium. She’s at ease during two hours on stage, giving the equivalent of a polished TED talk about what she calls the proven solution to mass shootings: social and emotional learning (SEL).

Proposals to armor schools, literally (bulletproof glass) and figuratively (surveillance systems), have been only sporadically successful at containing active shooters. Ideas for more gun control splinter Americans and got nowhere in Congress after Sandy Hook. Amid this polarized politics, Lewis quit her job as executive assistant to a CEO to start the Jesse Lewis Choose Love Movement, a foundation that developed and promulgates a free online prekindergarten-through-12th-grade SEL curriculum. SEL seeks to teach violence-prone people like Lanza how to manage their emotions, maintain empathetic relationships, and make responsible, nonviolent choices.

In rimless glasses, turtleneck, muted checked jacket, and floral skirt, Lewis, who has another son, 18-year-old J.T., talks about Jesse without choking up, but doesn’t hide her pain. Parents “come up to me in the grocery store and say, ‘Oh my God, I have to bring multiple kids to multiple events,’” she tells the teachers. “Do you know how I hear that? Wow. You get to run multiple kids to multiple places?”

Part of a Choose Love lesson on gratitude

Part of a Choose Love lesson on gratitude

The Benefits of Gratitude
Practicing gratitude helps me focus when I feel overwhelmed.

Educator Preparation
Prepare students’ Choose Love Journals.
Write the word “gratitude” on a word wall or vocabulary list.
Think of an example of a time when you felt overwhelmed and used gratitude to feel better.
Prepare to share it with students as an example.
Create a physical cue for gratitude. Physical cues help students remember and embody the lessons about courage, gratitude, forgiveness, and compassion. Options include using American Sign Language (ASL), clapping chants, brief rhymes, or a full-body pose.
If you have students who speak languages other than English, learn how to say “gratitude” in their native languages.

Gratitude for blessings is one of four key traits taught in Choose Life’s online lessons, which amount to 2,000 pages and span pre-K through 12th grade. The other three are courage, forgiveness, and compassion. The curriculum was designed so that it does not require special teacher training. Teachers can get no-cost help with the curriculum from the foundation’s online webinars and training modules. Schools can either teach the lessons in a separate SEL class or weave them into regular academic subjects.

Lewis particularly wanted her program to be free and user-friendly. There are other SEL programs; Sandy Hook had one, she says in an interview, but she learned after Jesse’s death that the program “never got out of the box,” because of its expense and cumbersome training.

These days, Lewis crisscrosses the country to evangelize at forums like Monroe-Woodbury’s for Choose Love’s curriculum. Before Jesse’s murder, she’d been a single working mom with a long commute, two boys to raise, and no knowledge of SEL. Then, as she was preparing Jesse’s clothes for his funeral, she noticed he had scrawled three words, with a beginning reader’s phonetic misspelling, on the kitchen chalkboard shortly before his death: “Norurting heling love.” Nurturing, healing, love.

In the ensuing months, amid the swirl of condolences, grief counseling, and debates about gun violence, certain words lingered with Lewis. President Obama’s tearful speech two days after the tragedy, acknowledging that the nation was failing to protect its children (planting in her the idea of starting a foundation). The remark by an acquaintance reflecting on the killings that more people needed to “choose love.” Most of all, Jesse’s three words, and his mother’s realization that Lanza’s life had been devoid of those attributes.

She sought out educators who researched and developed programs for teaching compassion in schools, including a well-connected one: Lewis buttonholed Obama when she met him before a gun-control speech he gave in Connecticut four months after the shootings. He put her in touch with his sister, who taught compassion curricula at the University of Hawaii. In 2013, Choose Love was up and running on private donations.

The Monroe-Woodbury School District will roll out the curriculum in its elementary schools this year, with plans to expand it to upper grades in the future. The teachers gave Lewis a standing ovation, gratifying social worker Denise Guerriero, who recruited Lewis to speak after hearing her at a conference.

“While I was watching Scarlett in Boston, I’m texting my director, saying, ‘We need to bring Scarlett to Monroe-Woodbury,’” Guerriero says. “She’s a beautiful human who is taking the pain and her loss and changing the world.”

But is she? The day after Lewis’ talk, a gunman slaughtered a dozen in a bar in Thousand Oaks, Calif. Juxtaposed with her presentation, this 307th American mass shooting of 2018, almost one shooting a day for the year, begged a desperate question: can Scarlett Lewis and SEL really change the world?

Choose Love doesn’t track how many schools have embraced its curriculum as a better or complementary solution. But it has been downloaded in all 50 states and in 67 countries, Lewis says. Most schools offering the curriculum don’t do so in a stand-alone class, but merge the lessons into regular academic subjects. This year, New Hampshire Governor Chris Sununu made his state the first to officially enact it statewide, pledging to “provide a backbone of support through Scarlett’s program” and a gubernatorial appointee to help interested schools adopt it.

Lewis’ certitude that New Hampshire’s step is right is born of research into SEL and walking her own valley of tears. In her book Nurturing Healing Love (Hay House, 2013), she recalls her initial instinct to cocoon herself in her sorrow after the shooting, even contemplating suicide. A state-appointed counselor persisted in reaching out, even washing Lewis’ feet at their first session in a ritual intended to sacramentalize her grief. The counselor told her that she must map out her own response to Jesse’s death (positive responses to problems being a key Choose Love lesson).

Attending her first meeting of a support group of parents whose children had died, she burst into tears. But when several of them hugged her, she realized that sharing her grief, and being surrounded by people who understood why she slept with Jesse’s shirts on her pillow, made her feel ever better. With more therapy, guilty memories of her inevitable parental conflicts with Jesse gave way to self-forgiveness (forgiveness: another pillar of Choose Love’s curriculum). 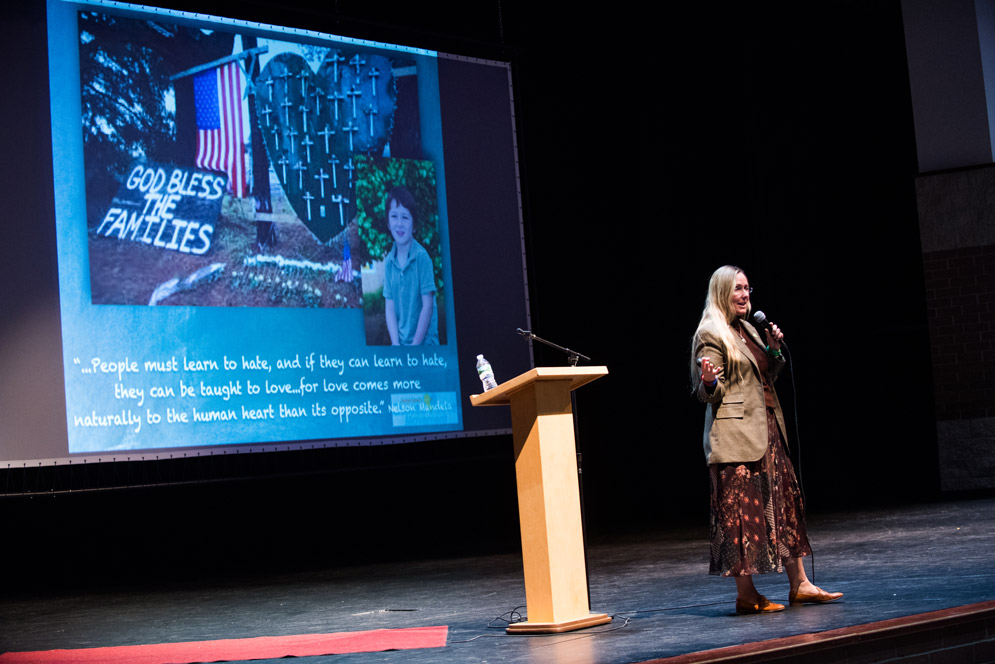 With her son’s image on screen, Lewis spoke last month at a New York school district that has adopted her foundation’s social and emotional learning curriculum. Photo by Jackie Ricciardi

She even forgave Lanza, whose shooting spree ended when he killed himself.

“I absolutely forgave him,” she tells BU Today. “I have said since day one that there were 28 victims…because I knew that somebody that could do something so heinous must have been in a tremendous amount of pain.” As a fifth grader, Lanza, diagnosed with Asperger’s and a sensory disorder that made him recoil from touch, wrote a pamphlet, The Big Book of Granny, whose titular character threatens or commits violence before being shot in the head by her son. (Documents recently released by the Connecticut state police flesh out the depiction of a “homebound recluse” fixated on mass shootings and with a self-described “scorn for humanity.”)

“He cried out for help, and at every turn that I can see, he wasn’t given the help that he needed,” says Lewis, who is struck by the similarities between herself and Lanza’s mother. “We pretty much parented alone and were denied services.” (Lewis says that her older son was refused special needs services as a kindergartner.) Nancy Lanza, who was her son’s first victim, had brought him to her firing range.

“Guns were her connection with him,” Lewis tells the Monroe-Woodbury teachers. “That was a mistake.”

Had SEL taught Lanza the “tools and attitudes for healthy relationships, meaningful connections, being resilient to the issues that he faced, the tragedy would never have happened,” she says. Indeed, from Lanza to Nikolas Cruz, who murdered 17 at Florida’s Marjory Stoneman Douglas High School earlier this year, she says, “they all have something in common, and it’s lack of social and emotional intelligence…These kids are angry, and anger caused mental illness.”

Corriveau cites two meta-analyses, from 2011 and last year. In both, she says, “gains were found in positive social behavior, academic performance, conduct problems, emotional distress, and substance use.…This included a reduction in bullying, violence, and aggression—which could be related to future reductions in violence.”

Calling SEL one of its five “strategic priorities,” the commonwealth of Massachusetts makes resources available to schools that want to teach it, says Jennifer Green, a Wheelock associate professor of special education.

Despite the research, Green says, some schools resist SEL, finding that squeezing additional instruction time out of the day can be hard. They are already burdened with responsibilities—to not only teach children, but also counsel them and provide things traditionally provided at home, like breakfast.

Lewis hears the same arguments from some schools hesitant to choose Choose Love. And before December 14, 2012, she was content to leave such decisions to principals and teachers, figuring that “it’s my job as a parent to clothe, bathe, feed, love, play with them, and it’s the school’s responsibility for educating them. And when I drop them off, they’re responsible for them.

“What I learned through my tragedy is that that’s not the case at all. Even when I dropped Jesse off, I was responsible for his safety.”

She knows that no parent can hover over her child all the school day, every school day. But by advocating for Choose Love or SEL, she says, parents can fulfill that parental duty of protecting their children. As for Lewis, creating and spreading her program, and especially embracing its teaching of forgiveness, means something additional:

“I refuse to be another victim of Adam Lanza.”