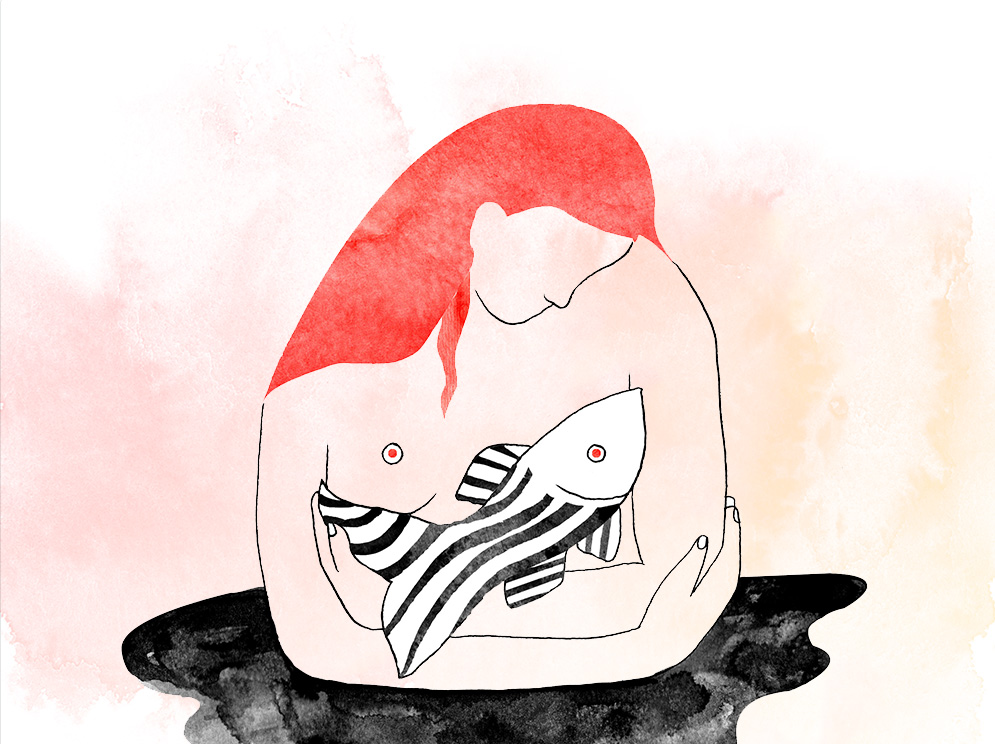 On the sixth floor of a brick building on the Boston University Medical Campus, at the end of a long, brightly lit corridor, stands a locked door. The door opens into a room with a cement floor and dozens of metal shelves holding scientific treasure: aquarium tanks filled with squiggling zebrafish. Derek Walsh, who oversees the facility, says there are 15,000 to 20,000 fish swimming in the tanks.

Each adult fish is about an inch long, silver with black stripes, just like the kind you’d see at a pet store. A few look different, though. There are 10-day old babies drifting through the water like specks of dust, and milky mutants called “Casper,” so transparent that you can see their ovaries lumpy with eggs. One tank, labeled “Fli1:GFP,” holds fish whose blood vessels glow green under UV light. These marvelous mutants, and others, are under the charge of Hui Feng, director of BU’s Lab of Zebrafish Genetics and Cancer Therapeutics, and they may hold clues to treating breast cancer. 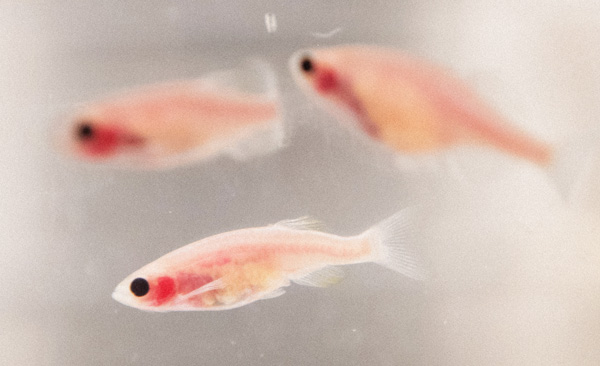 Although it might seem odd to study breast cancer in an animal with no breasts, zebrafish do have lungs, hearts, brains, eyes, and blood vessels that respond to cancer cells much as human vasculature does. Also, since scientists have used zebrafish to model disease for decades, their genetics are well-understood and easily manipulated. And finally—especially useful for studying cancer—the fish are transparent during development, and mutants like Casper are transparent as adults, so scientists can easily monitor tumor growth and metastasis.

“This is part of the genius of Hui Feng,” says David Farb, a School of Medicine professor and chair of pharmacology and experimental therapeutics. “The zebrafish can model human systems, and using them allows her to do pharmacological and genetics work quickly and relatively cheaply.”

Feng’s strategy is to combine observations and experiments in zebrafish with tests in human cells and analysis of human cancer genome databases. By linking all three approaches, she hopes to pinpoint new drug targets and potential therapies for breast cancer.

“If we find something in the fish, we go to the human patient cancer cell and ask: is this true for human cancer or not?” says Feng, a MED assistant professor of pharmacology and medicine. “If everything we find is true for fish, but not true in humans, nobody cares.”

The cancer gene from hell

Feng’s research focuses on the gene MYC, often called the “cancer gene from hell,” because it is altered in nearly all human cancers. Usually, alterations push MYC into overdrive, and because it codes for a transcription factor—a protein that turns genes on or off—hyperactive MYC can lead to runaway expression of many genes, and cancer. 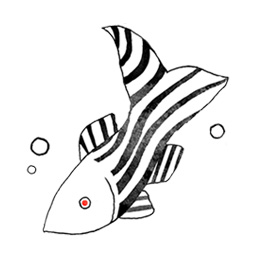 Feng, whose work is supported by BU’s Shamim and Ashraf Dahod Breast Cancer Research Center, the National Institutes of Health, and a number of private foundations, including the Leukemia Research Foundation and the Mary Kay Foundation, says that many different cancers, seemingly caused by many different gene mutations, all eventually lead back to MYC. And MYC is disproportionately elevated in triple-negative breast cancer, or TNBC, which lacks hormone receptors and therefore doesn’t respond to hormone therapy. While TNBC often responds well to chemotherapy, it can grow quickly, spread aggressively, and is more likely to recur than other types of breast cancer, according to the Susan G. Komen Breast Cancer Foundation. “If you had a way of killing cancer cells or blocking the spread or metastasis of these cells,” says Farb, “that could apply not just to triple-negative breast cancer, but to all cancers.”

MYC’s ubiquity made the gene a particularly attractive target for Feng. The problem, though, is that MYC is also important in normal cell division and cellular metabolism, so simply shutting it off doesn’t work. “Directly targeting MYC is very challenging and toxic,” says Feng. “That’s why this problem is so hard. If it were so easy, we would have found a cure for cancer already.”

Feng’s strategy is twofold. Scientists in her lab look for genes, biological pathways, and molecules that impair MYC-driven cancer cells, while leaving normal cells alone. She and her colleagues are also teasing apart the basic process of metastasis: how cancer cells enter blood vessels, travel through the body, and take hold elsewhere. 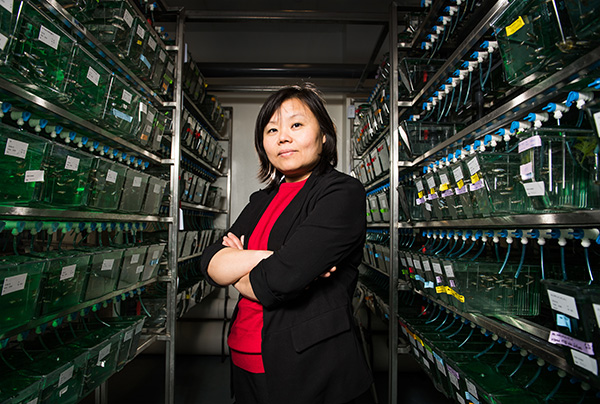 The zebrafish are critical for both lines of research. Some scientists in Feng’s lab use zebrafish that have been bred to develop MYC-driven cancer, and through painstaking genetic and molecular intervention, they use the cancer-riddled fish to look for any drug, pathway, or chemical compound that may decrease tumor size and spread. If anything looks promising, they test it in human cancer cells to see if the effect translates. The work is basic science at its most basic. One early discovery involves glutamine, an amino acid involved in cell metabolism and protein synthesis. The finding, published in Leukemia in 2016: targeting glutamine metabolism by inhibiting a metabolic enzyme called DLST could represent a novel approach for treating MYC cancers. “MYC-driven cancers are addicted to glutamine, but normal cells are not,” Feng says. “So if you withdraw glutamine from normal cells, they tolerate it. But if you withdraw glutamine from a MYC cancer, they just die. They crash.”

This research is still in its infancy: Feng is now working with John Porco, a College of Arts & Sciences professor of chemistry and director of BU’s Center for Molecular Discovery, to develop a small molecule that inhibits DLST and might easily block glutamine’s access to certain cellular functions. If it works, she will test it rigorously in fish, then in human cells, then in mice. Eventually it may lead to a therapy for humans.

Both chilling and enlightening

The other major project in Feng’s laboratory is to understand the molecular pathways that regulate the very first step of metastasis, called intravasation, the entry of tumor cells into blood vessels. By untangling this process, she and her colleagues hope to find ways to block the spread of tumor cells from their primary site.

One approach Feng’s students and colleagues use is to inject cancer cells into tiny, two-day-old fish embryos, using a microscope and minuscule capillary tubes. “At this stage, the zebrafish already has a tail and a head, a vascular system. It already looks like a fish,” says Fabrice Laroche, a postdoctoral fellow in Feng’s lab. “It’s already a little animal that we can use to study cancer.” Laroche and his colleagues inject the cancer cells into a fish’s yolk sac, which harbors the cancer cells much as a breast might. Then they watch the cancer cells, tagged in fluorescent red, migrate through the fish as it grows. Feng has filmed the process, and the microscopic movies of glowing red cancer cells barging into glowing green blood vessels are both chilling and enlightening. “The zebrafish has the advantage of being particularly transparent, so we can really look inside the tissues in a live animal and see how the cancer spreads,” says Laroche. “In that aspect, the zebrafish is a perfect model to study cancer.”

Laroche focuses on triple-negative breast cancer, which “tends to be very aggressive,” Feng says. He is studying a gene called S1PR1, which codes for a cellular receptor with many biological functions, including cell migration. He says his preliminary results seem to indicate “that when we make the breast cancer cell make more of this gene, or overexpress this gene, then the cancer cells spread more into the fish.”

“Cancer is lethal because the cells are rapidly growing and because they can spread,” says Farb. “When the cancer cells spread, the disease becomes, in many cases, an insurmountable clinical problem. If you can stop the cells from spreading once the cancer is diagnosed, and then kill the cancer cells that have already spread, we’d have a better chance of controlling or even curing the disease.”

To better understand metastasis, Feng is also looking beyond biology into engineering and physics. For instance, she is collaborating with physicist Igor Sokolov, a Tufts University professor of mechanical engineering, to study the physical properties that allow cancer cells to leave their place of origin and travel throughout the body. “We think the reason these tumor cells have such a great ability to metastasize is their strength—they are much tougher,” says Feng. “So when they try to squeeze through the blood vessels, they have more force, and they can actually really squeeze through.”

Feng says that interdisciplinary collaboration may hold the key to understanding cancer. “This is the trend—it needs to be,” she says. “We are only good at certain things. We are not good at everything. So it’s better to collaborate.”

“Feng is trying to innovate, trying to push the envelope,” says Farb, who notes that cross-disciplinary collaboration like hers is occurring more and more frequently in cancer research. “If a scientist can leverage technology from other disciplines, you can make big advances. That’s how you make breakthroughs.”