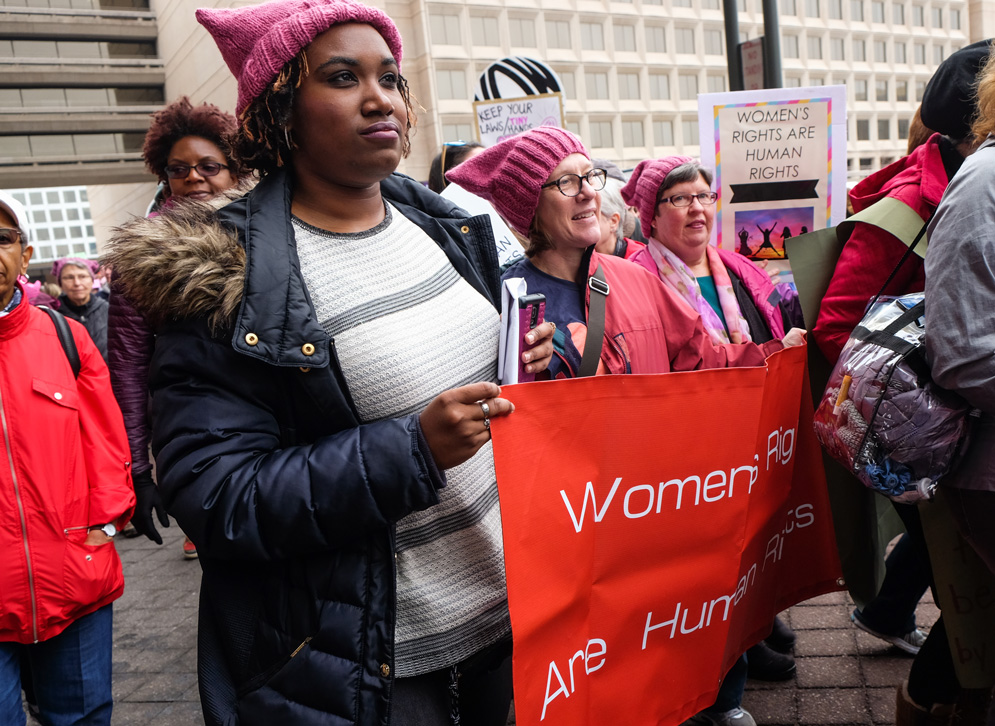 When 24-year-old Tiffani Lewis-Lockhart piled out of a cab with her boss and a coworker near Independence Mall in Washington, D.C., Saturday morning to join the Women’s March on Washington, she found herself in a river of humanity.

“I said, ‘This is real, this is happening,’” Lewis-Lockhart, the College of Arts & Sciences administrative coordinator and the Brooklyn-born daughter of two police officers, recalled afterward. “There were people everywhere. The farther we walked, the more and more people we saw. I just didn’t realize how big it was going to be. It completely blew my mind. It was so powerful to be there. I’ve never been a part of anything like that before. It felt like you were a part of history.” 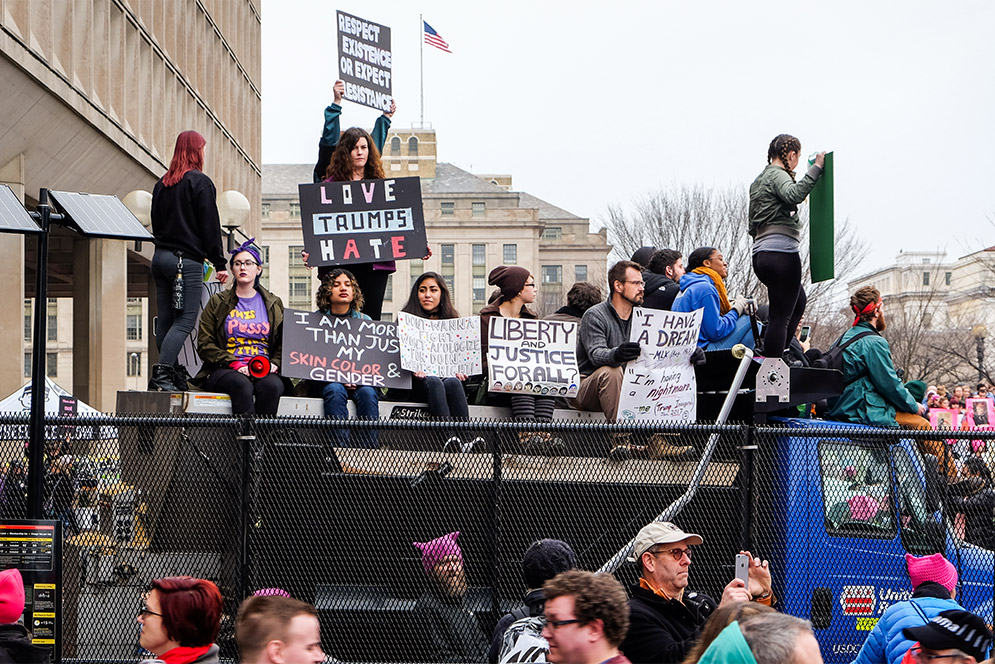 That message resounds through the reflections of the numerous BU students, faculty, and staff BU Today spoke to who had joined that river of humanity. Whether they marched in Washington, Boston, New York, San Jose, Sydney, or Seoul, participants told of coming away exhilarated, empowered, changed. They were there to rally in support of issues they felt were threatened under the new Trump administration, from women’s health and reproductive rights to LGBTQ rights to immigration and climate change. Rainbow flags were flown beside leaders mustering around the need for clean drinking water.

A part-time College of Communication student hoping to enroll in a graduate program next fall, Lewis-Lockhart said that as an African American woman, she had gone out of her way during the presidential campaign to speak carefully and cautiously about politics, but that she found her voice at Saturday’s event. “I try to be very careful to make sure I’m not offending anyone. I think sometimes that makes me silent,” she said. “I’m trying not to do that anymore. Now I know I’m going to get supported if I say something isn’t right.”

The other women hoisting the red banner with Lewis-Lockhart were her boss, Ann Cudd, dean of Arts & Sciences, and Nancy Geourntas, executive assistant to the dean. Several weeks earlier, Cudd had invited the two women to join her at the march. 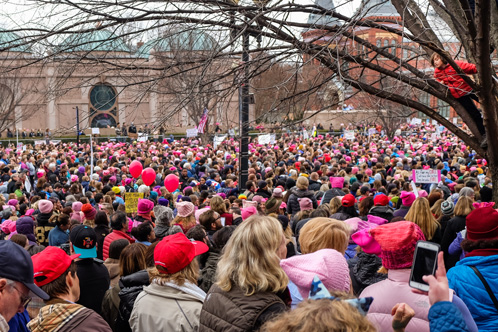 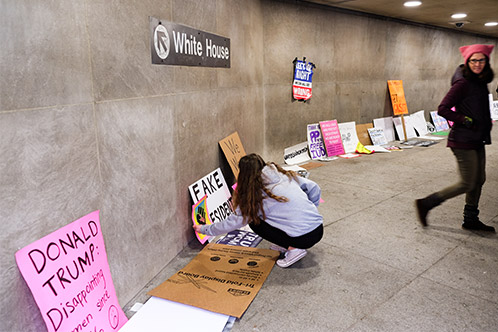 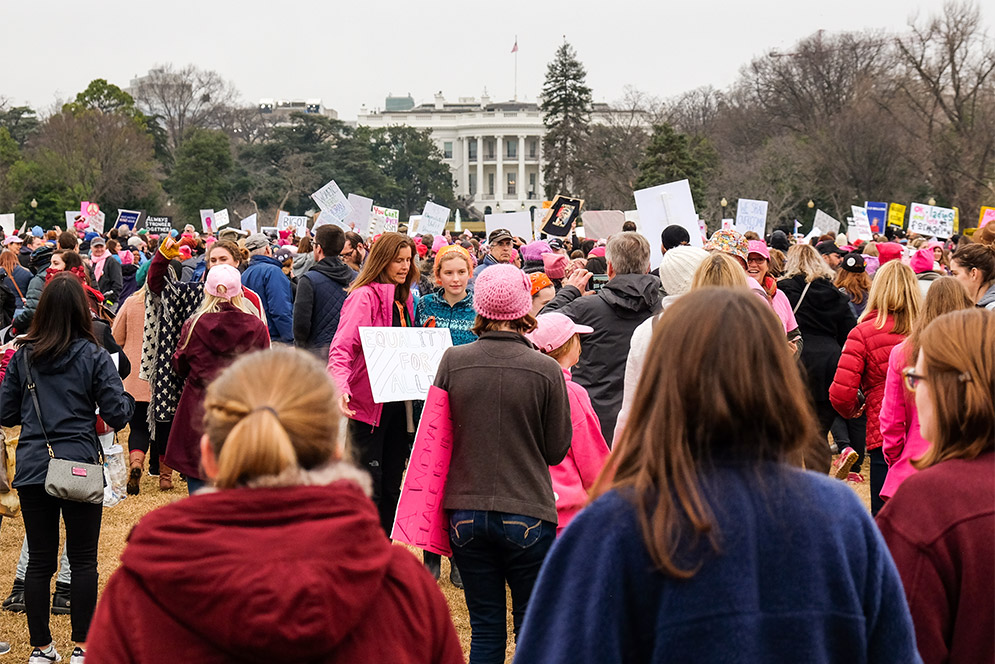 Women’s March on Washington: Some of the hundreds of thousands who gathered in the nation’s capital during Saturday’s march (top left). Signs left under a White House directional at a Washington, D.C., Metro station by participants after the march (top right). Marchers on the Ellipse, near the White House (bottom). Photos by Cydney Scott

“I felt like I stood up and was counted,” Cudd said after the event. “I’m just another citizen. Democracy takes all of us citizens to stand up and be counted. How can you not be against racism, homophobia, sexism, xenophobia? How can you not be for standing up against those things?”

Also at the Washington event was Morgan Farrar (CAS’20), marching with her mother, Erin Farrar, who flew to Washington from her home in Dayton, Ohio. Her grandmother, meanwhile, marched in Madison, Wisc., and many of Farrar’s BU classmates marched in Boston. “I’ve never been with so many people who felt the same way I do about women’s rights, reproductive rights, LGBTQ rights,” she said. “There was so much love and support and kindness. At one point I had to get from one side of the crowd to the other. I thought it would be hard, but it was so simple—I just said, ‘Excuse me,’ and it was like the Red Sea parting.”

On Monday, Farrar was still trying to grasp the magnitude of what had happened all over the world on Saturday. “I can’t even fathom it, that there were more than a million people,” she said. “It’s history. It’s such an emotional and amazing feeling to have—it’s that you did something. The whole point of the march is that it’s a first step. This is the collective voice of people not only in the United States, but all over the world who want to be represented in a way they’ve earned since—I don’t know—since the beginning of time. To have a part in that, it’s mind-blowing.” 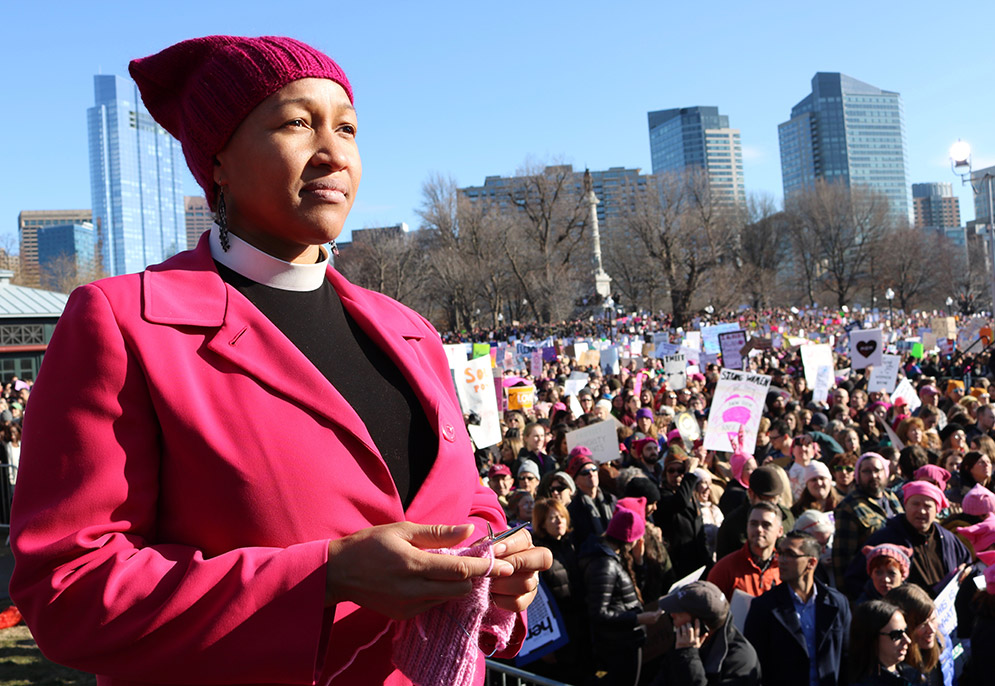 Rev. Mariama White-Hammond (STH’17), an activist and member of the ministerial staff at Bethel AME Church in Jamaica Plain, was among the speakers at Saturday’s Boston Women’s March for America. Photo by Jen Myronuk

At the Boston Women’s March for America, activist and ordained minister Mariama White-Hammond (STH’17) was one of the key speakers. “We’re going to have a lot of work to do after this,” White-Hammond said after the march. “It’s not about showing up at one big march, it’s about the work we need to do in our communities. We had a transformative leader—Barack Obama—and we didn’t show up. I definitely did stuff, but I didn’t wake up and say, ‘For the next eight years we have a president who actually gives a crap about people, and I should be organizing like I never have before.’ We didn’t give him the cover he needed. We didn’t ask, how can we together transform America—we expected him to do it… We should have done more.” 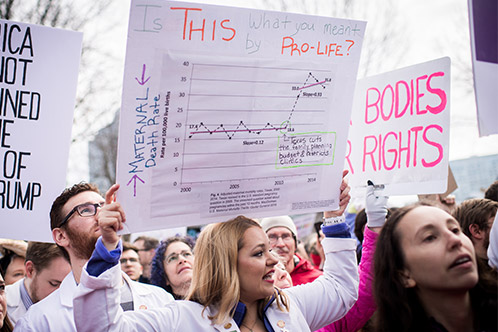 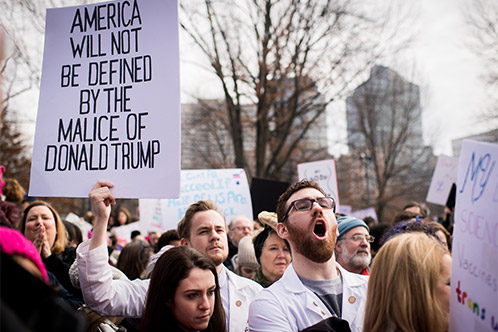 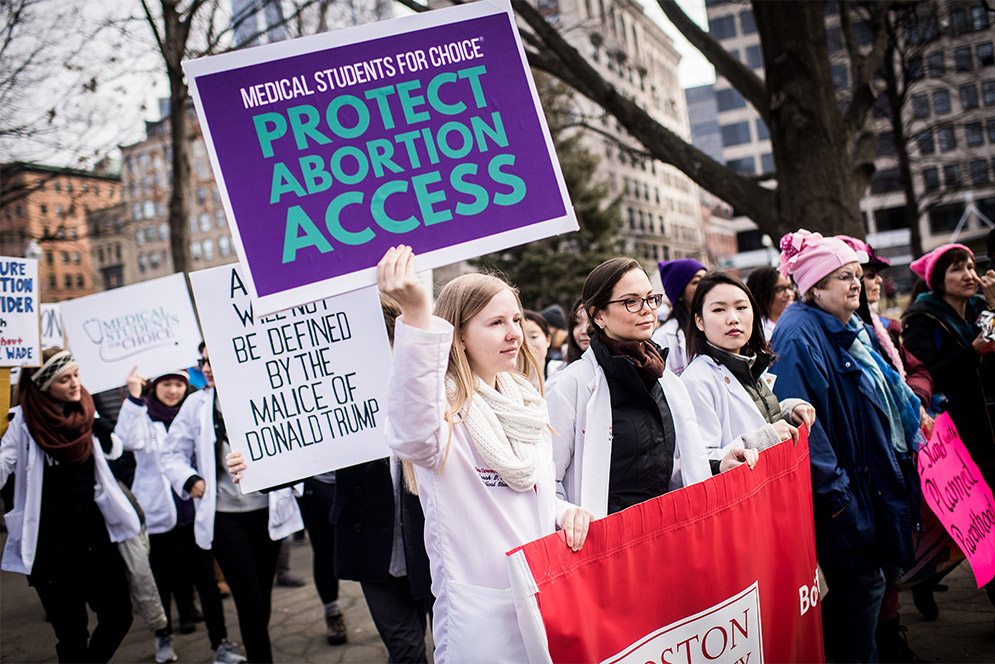 “I feel really lucky to be here,” said Sarah Ferree (MED’19), who was among the estimated 175,000 who gathered on the Boston Common for Saturday’s march. “There are so many people that care about so many causes, and from so many different backgrounds.”

Ferree, a student leader of Medical Students for Choice, an international nonprofit dedicated to ensuring that all medical students have access to abortion education and training, marched alongside fellow students, who, like her, wore their white medical coats and carried a MED banner. They were not alone—women’s health and the right to choose were frequent highlights of speakers and marchers in Washington, Boston, and the other marches held worldwide Saturday. Many signs carried messages like “My Body, My Choice, My Right” and “Girls Just Wanna Have FUNding for Planned Parenthood.” 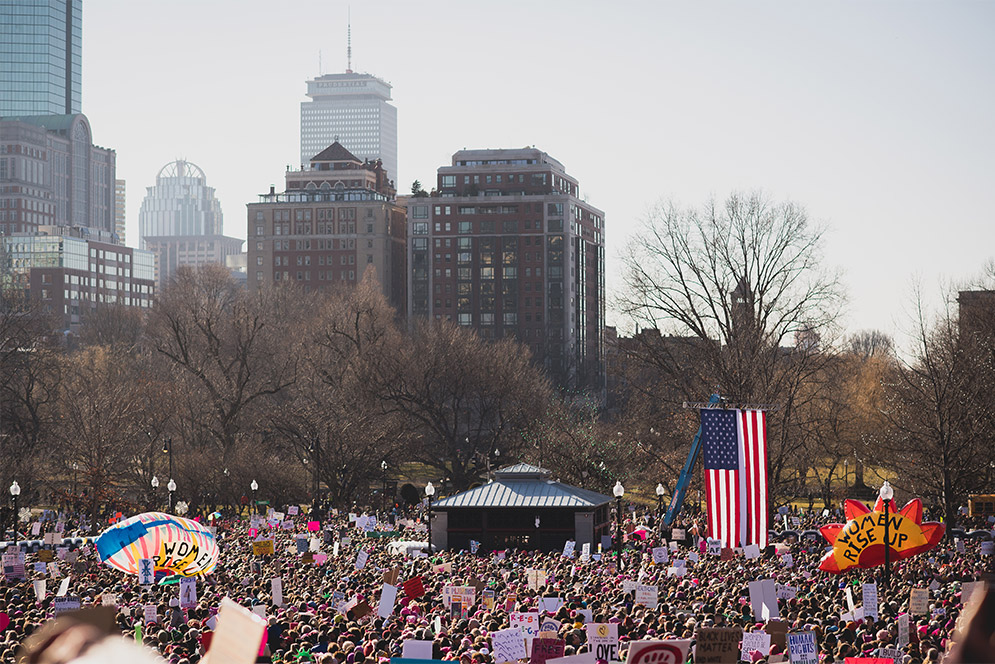 The Boston march drew a crowd estimated at 175,000 people. Photo by Jackie Ricciardi

Numerous BU faculty attended the Boston march as well, among them Christopher Martell, a School of Education clinical assistant professor, who said that “as a white, straight male,” he wanted to attend to send a message of solidarity, to say that “women’s issues are not only issues for women.” Martell and his wife felt it was important to bring their young daughters to the historic gathering. “Since this is a woman-led rally, I wanted my daughters to be a part of it, even if their memories may be limited,” he said. 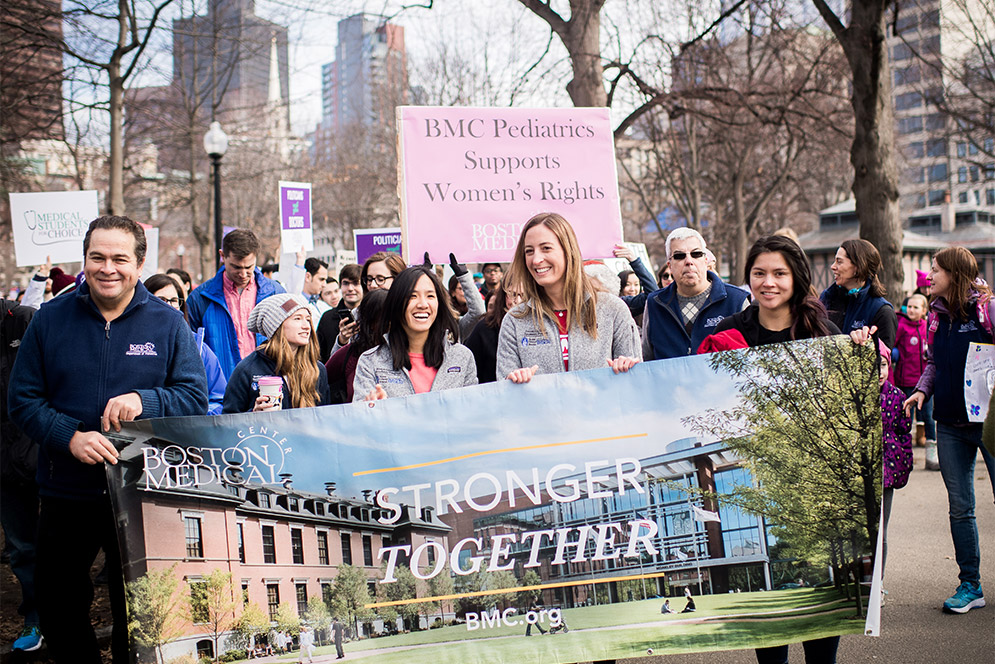 Also marching was Carrie Preston, a CAS professor of English, Kilachand Honors College director, and former director of BU’s Women, Gender & Sexuality Studies Program, who came with her mother and her husband and children. “I found it tremendously inspiring,” Preston said after the march. “There were so many people—it was a rainbow of colors across the Common…

“I think it was a one-day moment that many of us will remember for a very long time, and I think people around the world will say, ‘What were you doing on January 21?’”

Ian Evans can be reached at ianevans@bu.edu

Women’s March on Washington, Boston, around the World

There are 26 comments on Women’s March on Washington, Boston, around the World

Women’s March on Washington, Boston, around the World
26
share this