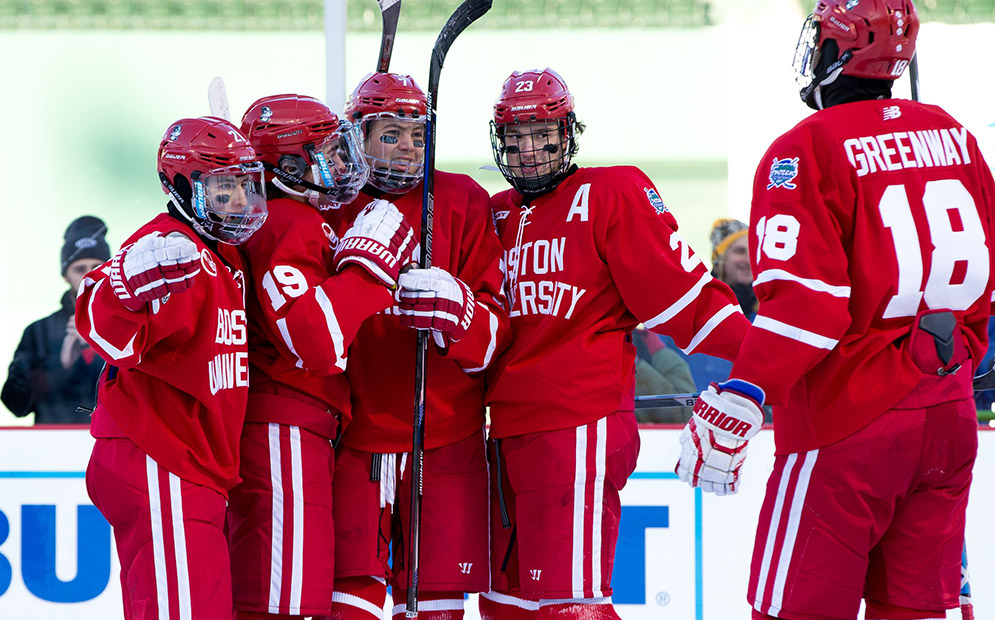 The BU men’s hockey Terriers begin their quest for the 2017 NCAA title today, when they face off against the University of North Dakota Fighting Hawks in Fargo in this year’s NCAA Tournament West Regional opener.

The game will be televised live on ESPN2 and WatchESPN starting at 3 p.m. ET, and two viewing parties are scheduled this afternoon so students can watch the game. On West Campus, BU Athletics is hosting a 21+ event at T’s Pub on Comm Ave, and Student Activities is hosting a viewing party at BU Central in the George Sherman Union. Both begin at 3 p.m.

Tabbed as second seed in the four-team West Regional group, the Terriers find themselves in what’s a de facto home game for the Fighting Hawks, whose rink is just over 80 miles from Fargo’s Scheels Arena, where today’s game will be played.

The opening contest victor will face the winner of today’s Minnesota Duluth–Ohio State matchup tomorrow, Saturday, March 25, at 6 p.m. in the West Regional Championship. That game will be broadcast live on ESPNU and WatchESPN.

North Dakota’s fan base is notoriously raucous, but defenseman Brandon Hickey (CGS’16, Questrom’18) says the opportunity to play in a hostile environment has historically provided additional motivation for the Terriers.

“I’m really excited to go play there. As an athlete, you want to go into hostile buildings and be able to say you beat a team on their home ice,” Hickey says. “I’m ready to go in there and play in front of a loud crowd and a packed house.”

Team captain Doyle Somerby (CGS’15, COM’17) says the BU players have had plenty of experience playing in big venues this season, among them the 65th Annual Beanpot Tournament at TD Garden in February, on their road trips to Denver and Michigan, and in Montreal, where several players competed in the 2017 IIHF World Junior Championship title game. Given that, he says, they should have no problem handling the pressure of a do-or-die situation tonight or tomorrow.

“It’s an us-against-the-world approach,” Somerby says. “I think it’s going to be a really fun atmosphere. A lot of the younger guys played at the Bell Center against Canada in Montreal, so they’re going to be used to it. I’ve played in front of a North Dakota crowd before at TD Garden. There were a lot of North Dakota fans. They travel well and they’re loud, and everyone’s looking forward to it.”

Despite a 3-2 loss to BC in last Friday’s Hockey East semifinals, head coach David Quinn (CAS’89) says he’s confident in the way his team is playing as it gets ready for the sport’s biggest stage.

“The last few weekends, I think we’ve played well. Obviously, a couple of times we haven’t gotten the results we wanted, but we’ve played a much smarter brand of hockey,” Quinn says. “I thought throughout the season that there were times we’d become immature and tried to force issues and force plays, but I think over the last three weeks to a month we’ve been much more practical.”

The Terriers and the Fighting Hawks last met in 2015, when BU bested North Dakota 5-3 in the Frozen Four semifinals. Quinn cautions against reading too much into that, however, as the two teams going head-to-head in Fargo today have both undergone significant transformation in the intervening two years.

To get out of a tough West Regional victorious, the consensus in the Terrier locker room is that they need to put an emphasis on the tried-and true attributes of successful postseason teams—defense, discipline, and goaltending. The latter may be the most important, as the Terriers will look for Jake Oettinger (CGS’18) and his 2.09 goals against average to buoy the BU back end.

“He’s unbelievable,” Somerby says. “He’s given us a chance every single night, and going in there, you’ve got to have a great goalie. We’re going to look to him to be at his best, and I think that can drive us.”

With so much hype surrounding this matchup, Quinn says, mentally preparing his team for the challenge is no challenge at all.

“If you’re an elite athlete and you’re an elite hockey player, this is the game you want to play in,” he says. “If I’m a player, I think it would pretty cool to go play North Dakota in Fargo in front of a packed house and that type of atmosphere. It’s why you come to places like BU—to play in games like this.”

BU will play North Dakota in the 2017 NCAA Tournament West Regional today, Friday, March 24, at 3 p.m. ET, at Scheels Arena in Fargo, N.D. The game will be broadcast live on ESPN2 and WatchESPN. BU Athletics is hosting a 21+ viewing party at T’s Pub, 973 Commonwealth Ave., and Student Activities is hosting a viewing party at BU Central, in the GSU basement, 775 Commonwealth Ave., both at 3 p.m.