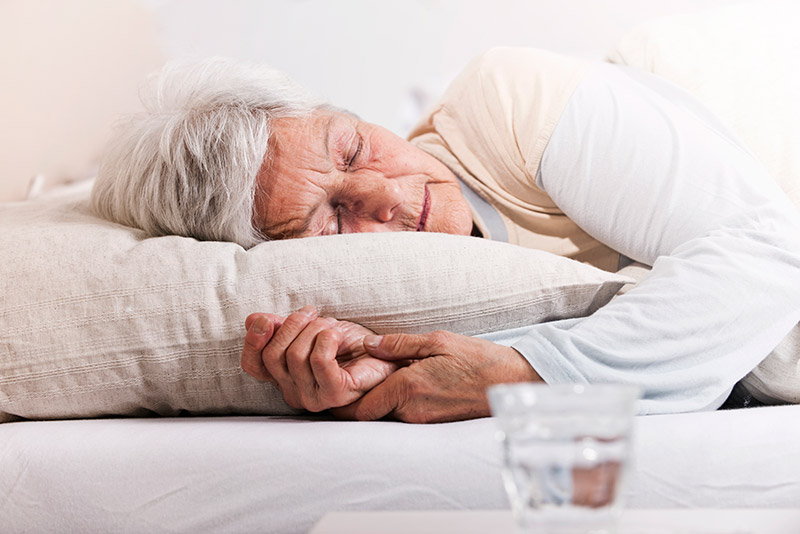 People over 65 who sleep longer than nine hours each night may be showing early signs of dementia or Alzheimer’s disease, according to research by Sudha Seshadri, a MED professor of neurology. Photo by vitranc/iStock

If senior citizens you know are sleeping more than nine hours every night, it could be time to suggest checking for early signs of dementia or Alzheimer’s disease.

A team of researchers led by Sudha Seshadri, a Boston University School of Medicine (MED) professor of neurology, analyzed data from the Framingham Heart Study, the nation’s longest-running epidemiological study. Begun in 1948 and supported by the National Heart, Lung, and Blood Institute (NHLBI), it has been run by BU since 1971. The researchers found that people over age 65 who consistently sleep more than nine hours every night had twice the risk of developing dementia and Alzheimer’s disease within the next 10 years when compared to those who slept less than nine hours a night. Seshadri says longer periods of sleep can also be a sign of depression.

MED researchers analyzed data from 2,457 Framingham study participants who responded to questions about their sleep patterns as part of their regular medical exams. Over a 10-year period of follow-up exams, 234 of these participants received a dementia diagnosis. By reviewing the responses related to their sleep patterns, the researchers found a statistically significant correlation among those who reported increasing their sleep to more than nine hours a night. Findings from the study, which received funding from the National Institute on Aging, the National Institute of Neurological Disorders and Stroke, and the NHLBI, were published in February 2017 in the journal Neurology.

The results suggest that longer sleep sessions may be a symptom rather than a cause of the brain changes that occur with dementia. It does not mean that family members should intervene by waking up older loved ones, Seshadri says.

Earlier detection, however, can help patients and their families plan and obtain services and support.

“One of the concerning things can be that before there is a formal diagnosis of dementia, people can sometimes fall victim to scams,” says Seshadri. “They can end up in an unsafe situation, because it’s not recognized that they may be able to drive a car; they may be able to live alone at home, but not respond to something unexpected. Recognizing the signs earlier can provide access to services, can enable people to get the admittedly limited, but valuable treatment options that are available, and could help protect them from potentially dangerous situations.”

The researchers also found that a person’s education level correlated with outcomes. People over 65 without a high school degree who slept more than nine hours nightly had a 600 percent greater risk of later receiving a dementia diagnosis than people with a high school degree.

“There’s a widely accepted understanding that education may be of some benefit in delaying the onset of clinical dementia,” Seshadri says, but it remains unclear whether the difference in risk is because education is associated with a person’s economic status or because brains build more synapses as they are educated. It’s also unclear how sleep may impact Alzheimer’s risk. She says researchers suspect that the longer sleeping time may be activating certain biological processes that could remove amyloid proteins from the brain, or for some other reason.

Seshadri says she hopes that the study will improve our understanding of the role of sleep in preventing dementia.

The researchers are now preparing for publication another study, which looks at the sleep cycles of a subgroup of Framingham Heart Study participants. “The question is, what is the pattern of sleep that is associated with increased risk of dementia?” Seshadri says. “We know it is more hours, but what is happening in the extra hours? Are they in stage 1 sleep, rapid eye movement (REM) sleep, slow-wave sleep? Details like that can help us understand the precise biology.”

Additional questions researchers hope to pursue focus on the biology of the brain. The researchers hypothesize that elongated sleep patterns could be what Seshadri calls “a compensatory mechanism for the brain to clear extra amyloid,” or protein fragments. “It could also just be a marker of early disease,” she says.

Michael Goldberg can be reached at michaelscott@gmail.com.

MED Researchers: Too Much Sleep Could Signal Dementia

MED Researchers: Too Much Sleep Could Signal Dementia
0
share this