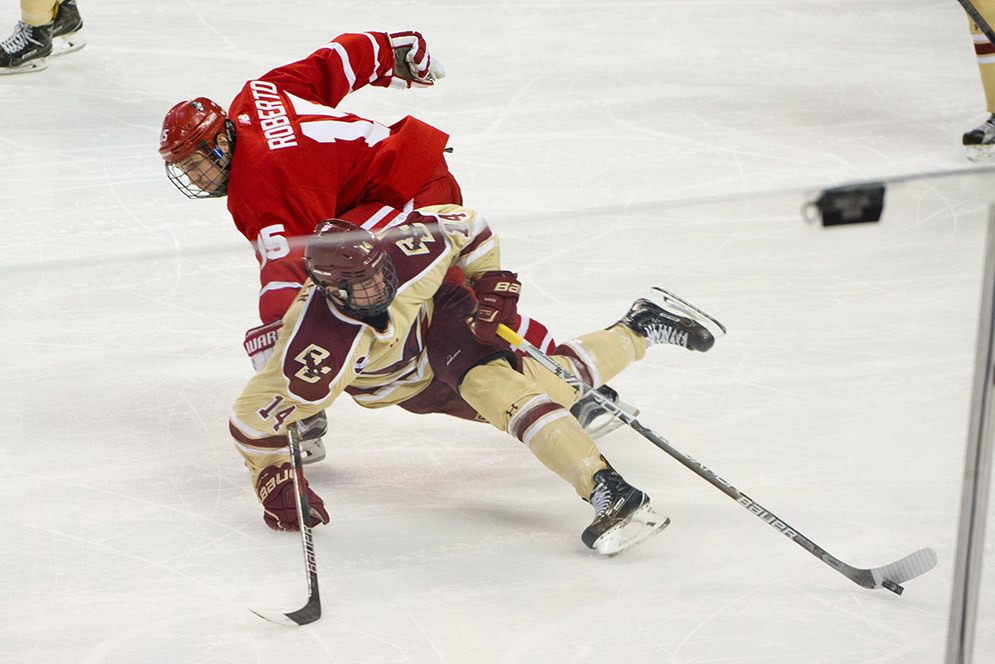 Nick Roberto (CGS’15, COM’17) and fellow Terriers took down BC in the opening round of the 65th annual Beanpot Tournament, their third straight win over the Eagles this season. BU is looking to earn its first four-game winning streak against its rival in a decade in a Hockey East semifinal tonight. Photo by Andy Costello

After overcoming a two-goal deficit in both games of last weekend’s sweep of Northeastern in the best-of-three Hockey East quarterfinals, the BU men’s hockey team is now set to attempt something not seen since the 2005–2006 season—taking down rival Boston College four times in a row. The two meet head-on tonight at 8 p.m. at TD Garden in a Hockey East semifinal matchup.

“We’re trying not to think about that. I hope we’re not thinking about that. We’ve just got to think about beating them one more time,” says head coach David Quinn (CAS’89). “Every game takes on its own identity and its own personality, so we’re just focusing on hopefully coming to the rink and being ready to go and not worrying about what happened in those three previous games.”

It’s the first time in a decade the two teams have faced off in both the Beanpot and Hockey East tournaments. The winner of tonight’s game moves on to face either UMass Lowell or Notre Dame in Saturday’s title bout, also at TD Garden.

Both BU and BC enter the contest riding a wave of momentum, with the Terriers owning a three-game winning streak and the Eagles coming off a dominant sweep of Vermont after finishing their regular season (0-5-2) .

Chad Krys (CAS’20), who scored the game-winning goal in last Saturday’s series-clinching win over Northeastern with just under 25 seconds left in regulation, says that while the slow starts in the quarterfinal games are concerning, the team’s ability to recover shows how much its grown over the course of the season.

“Obviously we can’t expect to go down every game and come back every game like we did last weekend,” Krys says. “I think there’s an obvious immaturity level, where we’re coming out a bit slow, but at the same time, I don’t know if at the beginning of the year we would’ve come back from a couple of two-goal deficits like that. I think it shows a lot of growth.”

Team captain Doyle Somerby (CGS’15, COM’17) says the matchup will continue to give the youthful BU team, which fell short earlier this season in the Beanpot championship game, experience in big games as it heads into the NCAA Tournament.

“I think you’ve got to control your emotions on Friday night with another rivalry game,” he says. “For us to be able to play good playoff hockey, work as hard as we can, and learn how to play in big moments and key moments at the ends of games is something that will pay dividends down the road.”

While he knows a poor effort won’t get the job done against a desperate BC team that will likely need to win Hockey East to make the NCAAs, Somerby says the Terriers’ track record of third-period success makes him confident that they can stay in any game.

“It’s been a theme, not only this year, but since I’ve been at BU, that we’ve always been a really good third-period team. We always trust ourselves at the end of games and trust our skillset,” he says. “We’ve got to really do some soul-searching…and start preparing mentally for BC, because we know they’re going to come out with guns blazing with their season on the line.”

Quinn is encouraged by what he’s seen from the team late in the season. “Our goalie was outstanding all weekend. Our special teams were big,” he says. “If you get great goaltending and good special teams, you have a good chance at this time of year.”

Marblehead native Somerby says that knowing their BU hockey careers are coming to an end has given him and his fellow seniors added motivation heading into the semifinals.

“It’s been pretty special going through the last couple of weekends. It really hit me on Saturday night when I was getting off the ice at Agganis. It’s pretty tough knowing I’ll never play another game there,” he says. “That night made me realize how it’s all coming to a close and coming to a close quickly, so I don’t want to have any regrets. For us three seniors, it’s just getting the point across that we’re going to make a run here, and that it’s whatever it takes.”

The BU men’s hockey team faces Boston College in the second Hockey East semifinal matchup tonight, Friday, March 17, at 8 p.m., at TD Garden, 100 Legends Way, Boston. The first semifinal game, between UMass Lowell and Notre Dame, is tonight at 5 p.m., also at TD Garden. The winners of the semifinal games meet in the Hockey East championship game tomorrow, Saturday, March 18, at 7 p.m., at TD Garden. Purchase tickets here; a limited number of BU student packages can be purchased at the Agganis Arena ticket office. Once those tickets are sold out, discounted student tickets can be purchased at the TD Garden ticket office, depending on availability. All games will be shown on NESN and ESPN3.