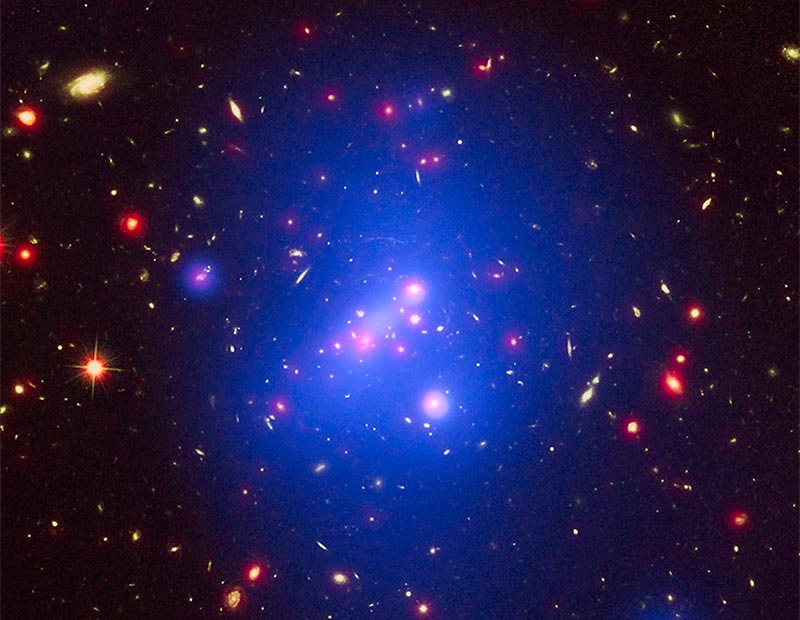 It’s a cosmic irony: the biggest things in the universe can also be the hardest to find.

Elizabeth Blanton, a Boston University associate professor of astronomy, started hunting for distant galaxy clusters more than 20 years ago. A single galaxy cluster can be as massive as a quadrillion suns, yet faraway clusters are so faint that they are practically invisible to all but the biggest Earth-bound telescopes. Distant clusters hold pieces of the story of how the web-like structure of the universe first emerged and could help illuminate the true nature of dark energy and dark matter. Now, her team’s search is delivering its biggest return yet: a catalog of about 200 candidate galaxy clusters which, if confirmed, may include some of the most distant clusters ever found. The new results, which will be a useful tool for astronomers worldwide, were published in the July 26, 2017, edition of the Astrophysical Journal by a team that includes Rachel Paterno-Mahler (GRS’15), PhD candidate Emmet Golden-Marx (GRS’16,’19), Gagandeep Anand (GRS’17), Joshua Wing (GRS’07,’13), and colleagues at the University of Missouri-Kansas City and the Harvard-Smithsonian Center for Astrophysics.

Galaxy clusters can contain thousands of galaxies and many trillions of stars—and that’s just what astronomers can see with ordinary telescopes. Hot gas between the galaxies glows with X-rays, and astronomers suspect that more than 85 percent of every cluster’s mass is hidden in the form of dark matter. Mapped in three dimensions, the universe is a web of bright filaments and dark voids, with galaxy clusters occupying the spots where the filaments intersect.

The new cache of distant galaxy cluster candidates may help researchers pin down the properties of dark matter and dark energy, says Paterno-Mahler, first author on the new paper, one of a series forthcoming from Blanton’s team. “Galaxy clusters are really good test-beds for learning about the cosmological parameters of our universe, like how much dark energy there is and how much dark matter there is.”

By comparing faraway clusters with their local counterparts, researchers can also assemble a timetable of how galaxy clusters formed and grew. That’s because light from the most distant clusters had to travel billions of years before reaching Earth, so astronomers see those clusters as they were long ago. “If we want to learn how clusters—the most massive collapsed structures in the universe—form and evolve, we need to study them over a range of distances, going all the way back,” says coauthor Mark Brodwin, assistant professor of physics and astronomy at the University of Missouri-Kansas City. And because galaxy clusters give astronomers access to a large sample of galaxies that are similar in age, they also provide a laboratory in which to study how individual galaxies have changed over time. “You have a bunch of galaxies at the same epoch, together in space, to compare to more nearby galaxies,” says Blanton.

But the farther a galaxy cluster is from Earth, the fainter it appears. Traditional optical telescopes must stare at a single spot in the sky for a long time to collect enough light to reveal a distant cluster, and surveying the whole sky this way is time-prohibitive. So, to create the new catalog, Blanton and her team scoured archived data for clues to where clusters might be, and then followed up with targeted telescope observations. Their search, dubbed COBRA (Clusters Occupied by Bent Radio AGN, or active galactic nuclei), was supported by grants from the National Science Foundation and NASA.

Their trail of clues starts with the fact that almost every large galaxy has a supermassive black hole at its center. These black holes are notoriously messy eaters, and when they are feasting, some of the dust and gas plunging inward gets splashed out in enormous, spiraling jets. These jets can stretch the width of the galaxy and beyond, and they produce a radio-wave roar that astronomers can pick up with radio telescopes on Earth. If the galaxy also happens to be zooming through hot cluster gas (or if the gas is zooming past the galaxy), the jets flex into a characteristic “C” shape—“like your hair blowing in the wind,” says Blanton. This “C” shape is the first clue to a possible cluster.

Blanton’s team pored over existing sky surveys and found almost 2,000 of these peculiar objects. Then Wing, as part of his dissertation work, compared those suspected clusters to visual-light images from the archives of the Sloan Digital Sky Survey. The most exciting candidates, says Blanton, are those for which the Sloan pictures look dark, hinting that the radio signal could be coming from a cluster so distant that the Sloan Survey telescope can’t see it at all.

With the possibilities narrowed down further, they then used the Spitzer Space Telescope to zero in on about 650 possible clusters, one by one. (Spitzer is most sensitive to infrared light, radiation that can’t be seen by the human eye but is ideal for observing distant galaxies.) With a computer’s help, they counted up the number of galaxies in each Spitzer frame and compared it to the typical number of galaxies in a comparable area of the sky. An unusually high number of galaxies—called an “overdensity”—suggests a galaxy cluster.

An overdensity is not definitive proof of a galaxy cluster, though. “You’re seeing a 2D image of a 3D distribution of objects,” explains Blanton. “Some of them could be way in the foreground, or way in the background.” These “projection effects” can create the illusion of a cluster where none really exists. The group’s next step, underway now, is to measure the distance to each galaxy in the apparent cluster to confirm that the grouping is real, not an optical illusion.

Golden-Marx is already pinning down distances to some of the galaxies using the 4.3-meter Discovery Channel Telescope, where BU is a partner institution, and Blanton hopes to secure time on the Hubble Space Telescope and one of the twin 10-meter Keck telescopes in Hawaii to get even more precise measurements. Once the distances are confirmed, the team will be able to properly order the clusters by age and also confirm whether their catalog really includes the most distant clusters yet found.