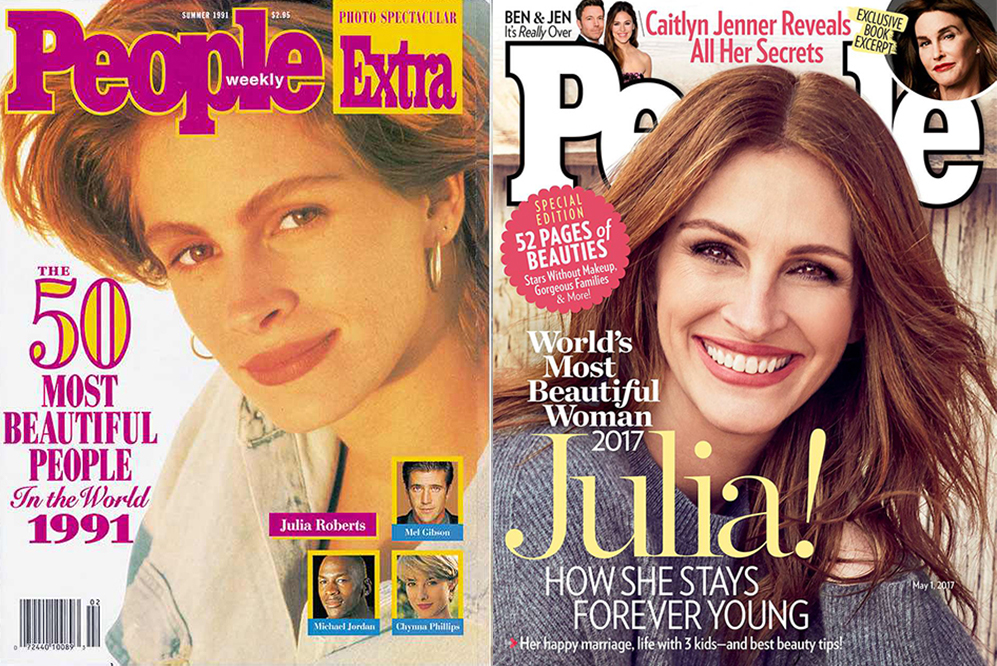 Julia Roberts has made People’s cover five times, including this year at age 49, in what BU research calls a sign of our increasing appreciation of older beauty. Photos © Time Inc.

Mirror, mirror on the wall,

Older and darker look fairer to all.

Increasingly, that’s the mantra of our aging and diversifying society, whose notions of beauty are moving to include older and nonwhite people. So says a new School of Medicine–led study that tapped an unusual source for its scholarship: People magazine’s annual list of the World’s Most Beautiful (WMB) people.

Published in the journal JAMA Dermatology, the study compares the 50 celebrities on the 1990 inaugural list with the 135 on this year’s.

Star-gazers will note the presence of many African Americans as well on the above list, highlighting another finding of the study: nonwhites comprised 24 percent of the 1990 list but 40 percent this year.

The percentage of people of color on this year’s World’s Most Beautiful list is more than a third again as great as on the original list, in 1990.

America is shifting its notions of beauty to reflect its shifting demographics, says Vashi, who also directs BU’s Center for Ethnic Skin and its Cosmetic and Laser Center.

The percentage of women on the list was 52 percent in 1990 and 88 percent this year, an increase that Vashi attributes to one societal attitude that hasn’t changed: “It’s always been more of an issue that women be beautiful.”

With almost 44 million readers, People is the country’s most popular magazine, and its WMB list has been stroking Hollywood egos annually since it was first published in 1990. The list is chosen by magazine staff after surveying readers, modeling agents, and photographers.

Vashi believes the greater appreciation for older and darker beauty is part of a trend rather than a coincidence, and her opinion is reinforced by a separate analysis the researchers did of all the number one winners (those who made the issue’s cover) since People began compiling the list.

In that elite group, only four were nonwhite, “and all of these occurred after the year 2000,” she says. Moreover, six covers since 2010 have featured celebrities who were age 40 or older, and prior to that year, she says, only one was in that age bracket.

In contrast to this year’s cover-making Roberts, closing in on her half-century mark, Michelle Pfeiffer, then 32, graced the 1990 cover.

“At present, a wider variety of skin colors and inclusion of older age groups are represented among those deemed to be the most beautiful” in People’s list, Vashi and her coresearchers write in their study. The increase in older celebrities considered list-worthy, they add, “is significant in the present aging society,” where looking younger was one reason that 60 percent of respondents to a survey last year said they were considering cosmetic surgery.

At the same time, the cosmetics industry is increasingly making products to complement darker skin tones, the researchers write.

“With the advent of the highly connected world that has exposed individuals to many forms of beauty, we still strive to understand what beauty entails,” the study says. “Through an examination of the WMB issue of People, we found that these beauty standards are evolving as people learn how to integrate the effects of media with exposure to new cultures and different norms.”

Vashi, author of a book on body dysmorphic disorder, which makes people fixate on an imagined or minor flaw in their appearance, says certain notions of beauty are biologically innate to people across times and cultures—for example, blemish-free skin.

“But then there’s this whole subjective aspect to beauty, and that’s what…can change,” she says, citing ancient Egyptians who colored the skin between their eyebrows because it was considered attractive.