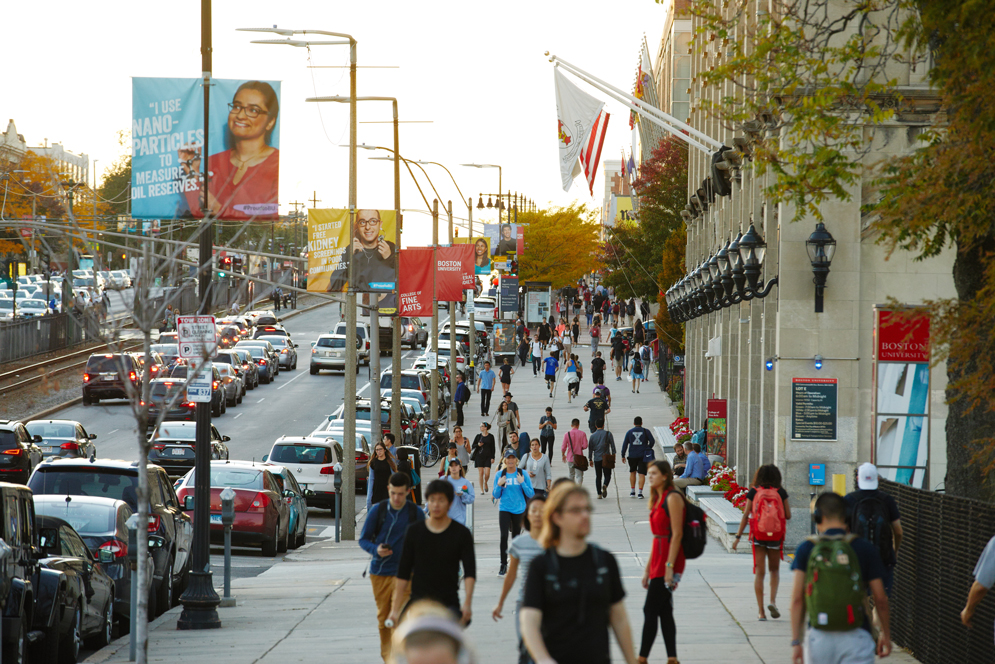 BU grads are among the most desirable employees for companies worldwide, according to new ratings. Photo by Dave Green

BU graduates, coveted for years by employers around the world, have become even more desirable.

Robert A. Brown, president of BU, says the University’s new status is not an accident of fate. “The University has invested years of effort and millions of dollars identifying and embedding in our programs the critical skills needed to build the businesses of the future,” Brown says. “A deliberate focus on interdisciplinary research and education for our students, and the recruitment of the most ambitious students and promising faculty from around the world, have built a University that delivers, in turn, the most promising employees for companies around the world.”

He suggests that the inclusion of three local schools—BU, Harvard, and MIT—in the top 10 list could encourage Amazon to look more closely at Boston as the company considers locations for its planned second headquarters. The online retailer has received bids from 238 cities and regions.

Brown says the skill sets that Boston University graduates gain from their rigorous academic experience line up nicely with the criteria employers cited to THE when choosing universities from which to recruit. Those include professional competency, communications skills, critical thinking, collaboration, creativity, social and cultural awareness, and leadership. Other much-cited employer requirements of the graduates were “expertise in one field of competence” and “digital competency,” as well as the “quality of research facilities” of the university.

THE compiles its list with a two-step process designed by the French consulting firm Emerging. First, it surveys management-level recruiters in various countries. Each respondent is given a list of universities locally, is invited to add additional ones, and is then asked to rank up to 15 schools in order of the employability of their graduates. (Recruiters who’ve conducted global talent searches are also asked to select the best universities worldwide.)

The second step involves a survey of 3,000-plus directors of international companies, who are asked to winnow the first list down to 10 local and global schools or add universities of their own choosing. Both steps include respondents from 20 nations, including Brazil, Canada, China, Germany, India, Japan, Russia, South Korea, Switzerland, the United Arab Emirates, the United Kingdom, and the United States.

“There is a clear view worldwide that US universities are leading the way in addressing the digital skills revolution,” THE’s editors write in their report on the rankings.

Jean Morrison, University provost, says she is gratified that BU continues to make progress in the THE global ranking. “We are extremely pleased to see confirmation of the strengths of our graduates as rising professionals,” she says. “It is a tribute to the work ethic and adaptability of these talented students and to the acuity of our faculty in helping them develop skills that are relevant to the evolving needs of the 21st-century marketplace.”

The employability rankings follow BU’s step-up this fall in the closely watched US News & World Report rankings, which graded Boston University 37th among top US universities. That was BU’s best-ever showing in those ratings and two notches above last year’s ranking.

BU Ranks Sixth Internationally in Employability of Graduates
3
share this