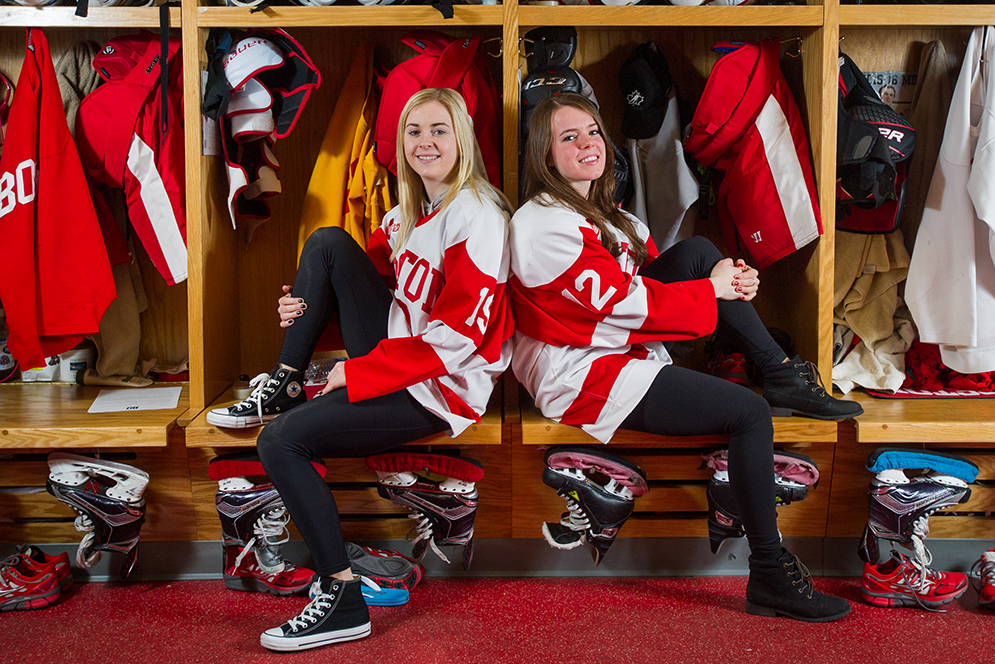 Rebecca Leslie (Questrom’18) (from left) and Victoria Bach (CGS’16) were drawn to BU because of its rigorous academics and the women’s ice hockey team’s reputation. Photo by Cydney Scott

When Victoria Bach and Rebecca Leslie decided to attend Boston University and play for the women’s ice hockey team, they already had a long history of friendship and competition. They also had two Canadian National titles and an International Ice Hockey Federation World Women’s title under their belts.

The special chemistry between Bach (CGS’16) and Leslie (Questrom’18), now college roommates, teammates, and members of the same line on the ice, is cited as one factor behind the 14-9-2 Terriers’ success this season.

“They’re similar players in that neither one of them is the biggest kid physically, but they’re both great skaters and talented with the puck,” says women’s ice hockey head coach Brian Durocher (SED’78). “They have a good sense for the game.”

The two grew up on opposite ends of Ontario, both in families where hockey played a prominent role. In Ottawa, Leslie learned to skate before she was four, emulating her hockey-playing older brother. Competitions between the two on the family’s homemade outdoor rink were commonplace. She was as devoted to the soccer field as to the ice rink until 10th grade, when it became exclusively hockey.

Bach, who grew up in Milton, outside of Toronto, began skating in elementary school, encouraged by her father. “My dad played hockey his whole life, so he really pushed for me to start skating lessons,” she says. “I started to really love the game when I was watching the 2010 Olympics, and from there I was like, ‘I want to play this sport.’”

“I think we’ve always followed similar paths,” says Leslie. “Growing up we always played in the same leagues and saw how each other did, which was good competition.”

“We’ve always kind of known of each other,” Bach says.

They first met while competing in the Provincial Women’s Hockey League, a high level junior ice hockey organization based in Ontario. Bach was a member of the Mississauga Junior Chiefs, and Leslie played for her hometown Ottawa Lady Senators. They competed against each other through high school. But it wasn’t until 2013 that they became friends. They found themselves teammates on Under-17 Team Ontario and competing for the Canadian National Women’s Under-17 Championship, which their team won. Another victory came in 2014 when they helped capture the U18 National Crown for Team Ontario. Playing for Team Canada at the IIHF Women’s World Championship later that year, they helped their team win a gold medal.

“Anytime you can put on that Team Canada jersey,” Bach says, “it’s just an honor and you can’t really describe the feeling.”

Leslie’s take on the experience: “The tournaments, national championships, and the World Championship were just a good bonding time and helped us get better.”

When it came time to choose a college, both women were drawn to BU because of its rigorous academics and the women’s ice hockey team’s reputation.

“Rebecca had already committed to BU, but I hadn’t yet,” says Bach, recalling the IIHF World Women’s tournament in 2014. “When I saw her commit, I thought, I want to go to the same place.” Both have embraced Boston and BU. Bach wants to go on to the College of Communication next year, where she plans to major in advertising and pursue her interests in graphic design. Leslie is aiming for a career in marketing.

“I want to leave my footstep on BU not just as an athlete, but with a purpose, as a member of the BU community,” says Leslie.

As freshmen last year, the two women made an immediate impact. Bach’s 20 goals tied the NCAA lead for goals by a freshman, and she went on to snag Hockey East Rookie of the Year. Leslie had 31 points, on 14 goals and 17 assists, and was named to the Hockey East All-Rookie Team.

This season, both players have continued to shine on the ice, with Leslie leading the team in points, with 31, while also earning a team-high 25 assists, and Bach second in points, with 28 points, on 14 goals and 14 assists. Both are expected to be key players in the 38th Annual Women’s Beanpot Tournament, which begins February 2 at Walter Brown Arena, with the Terriers going up against Northeastern.

“They’re both outstanding kids who have a lot of God-given talent,” Durocher says. “I consider myself lucky to be able to give them advice to try to improve their game. They’ve clearly already shown that they’re good college hockey players.”

Bach and Leslie are optimistic about the Terriers’ Beanpot chances, even after the team dropped last year’s tournament semifinal to Harvard 9-2. They know they face some formidable competition. Boston College, currently undefeated at 23-0-0, is ranked number one in the country, and the Northeastern Huskies (20-4-1) come in at sixth.

“Because of where we are in the conference, these are going to be important games for us,” Leslie says. “Its really cool to have it at BU and see what we can do here in front of a home crowd.”

“We just need to stay calm and stick to the game plan,” says Bach. “We know we can compete with them.”

The 38th annual Women’s Beanpot Tournament: BU plays Northeastern University in the second game of the semifinal Tuesday, February 2, at 8 p.m., preceded by the semifinal between Harvard and Boston College at 5 p.m., both at Walter Brown Arena. Purchase tickets here or call 617-353-GOBU and choose option 2 or at either the Agganis Arena or Walter Brown Arena box office on game days. Ticket prices for each round are $10 for the general public and $5 for youths. Students, faculty, and staff from the participating schools get one free ticket per valid school ID, available only in person. Beanpot second round: consolation game is at 5 p.m. Tuesday, February 9; championship game at 8 p.m.; both at Walter Brown Arena.

Joshua Gutchess can be reached at jgutch12@bu.edu.