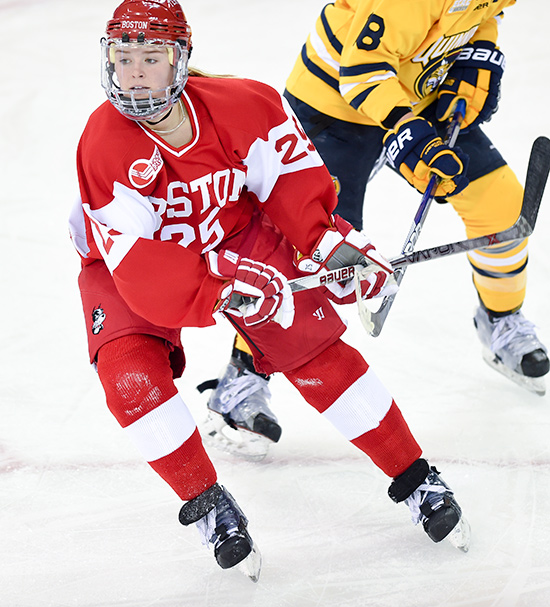 At the end of the BU women’s ice hockey 2015–2016 season, many players felt disappointed at falling just short of their fifth consecutive Hockey East championship with a 5-0 loss to BC in the title game. While the Terriers found the back of the net at a rate of 3.59 goals per game last year, good for the third-best in Hockey East, their defense lagged behind. BU gave up 119 goals, the fourth-worst total in the league and a 25-goal jump from the previous season’s 94.

On a team loaded with veterans, there was an unspoken feeling that the Terriers should have done more.

“I think the kids were disappointed in themselves in that they didn’t get as many wins during the regular season as they wanted,” says head coach Brian Durocher (SED’78). “I think they know that with the veteran team we had last year, we needed to be a little more consistent and thorough.”

Durocher, entering his 12th season at the helm of the program, has an all-time record of 231-129-43 at BU. He has identified the area his team needs to focus on as players prepare for Sunday afternoon’s home opener against Providence College, which starts their regular season.

“If I were to discuss one area, we just need to be better defensively,” he says. “There were two teams that played really good defense last year in Northeastern and Boston College, and we were part of the other seven. In wins, we looked like we were a part of the upper three, but I’m not fooled by that. We gave up too many goals.”

For Durocher, bettering the defense begins with an overall commitment to being defensively responsible. “I think a lot of it is the 18 skaters,” he says. “The goalies have their job to do, no question about it, but I think the skaters have to make sure they’re a little more demanding of themselves.”

Among the players he’s relying on to drive home that message is cocaptain Alexis Crossley (CAS’16, MET’18), runner-up for the Hockey East Best Defenseman award last season. It’s a challenge she says she’s eager to take on.

“Playing the best defense I can is obviously, first and foremost, something I pride myself on as a defenseman,” Crossley says. “I would love to continually get better and do anything I can to help the team out, whether that’s making a simple play in the defensive zone, making that first pass tape-to-tape, or even just being a voice supporting those who have the puck.”

In addition to her steadying presence on the blue line, Crossley, who turned in 20 points for the Terriers last season, hopes to be a driving force for the team’s offensive attack. “I want to be consistent in getting pucks to the net and hopefully creating some shooting opportunities and scoring chances,” she says. “For me, it’s not about scoring goals, it’s about making a good pass to set my teammates up to score those goals.”

Fellow captain Natalie Flynn (CGS’15, SHA’17) shares a similar unselfish attitude. Not known for what Durocher calls “glittery statistics,” Flynn acknowledges the importance of being a motivational role model even when she’s not in the game.

“Not playing all the time doesn’t necessarily mean that you’re not a leader. I’d like to think that I lead off the ice and in the gym with my work ethic, but also on the ice,” Flynn says. “If I don’t play much, but my head’s still in the game and I can get everyone going, I think that pushes the kids that do play that much harder.”

Flynn says she was shocked to be voted cocaptain by her teammates, but it came as no surprise to Crossley. “I think Flynn and I really complement each other on and off the ice,” she says. “I’m happy to share the position with someone who is so worthy of being a captain on our team.”

While an improved defense will be key to the Terriers’ success this season, the team’s high-profile offense should continue to shine. Among the 15 returning letter winners are Rebecca Leslie (CAS’18, Questrom’18) and Victoria Bach (CGS’16, COM’18), who were numbers one and two in overall scoring last season. Durocher says he has high expectations for other players as well.

“I think Maddie Elia (CGS’15, COM’17) has even more in her,” he says. “One of my dark horses is Samantha Sutherland (CAS’17). I think Sam was a little snake-bit last year. I hope that there’s a step up from her. Sammy Davis (CGS’17) gave us a great freshman year, and the job for her is to not try and do too much and not to press.”

Durocher also expects transfers Mary Parker (MET’18), formerly with Harvard, and Nina Rodgers (CAS’18), formerly with Minnesota, who played against one another in the 2015 national championship, to bring an element of poise to the lineup.

“To have a couple of established college hockey players coming from programs like Minnesota and Harvard in Nina and Mary—you’ve got to like having some of those veterans here,” Durocher says.

In net, Erin O’Neil (SHA’18) and Victoria Hanson (Questrom’17) will once again battle it out for playing time. Despite O’Neil’s getting the majority of the starts last season, Durocher says that it’s up to each of them to earn the lead goalie spot heading into this year’s campaign.

He points to scheduled games against Minnesota, Harvard, Princeton, and Penn State as highlights of this year’s slate and says he’s pleased with the overall makeup of the schedule and the challenge it offers.

“Going to Penn State, we had our hands full last year. I’m thinking that with another year of evolution under their belt, they’re going to be a recognized team,” Durocher says. “There are no easy tilts this season, and I think there’s some interesting diversity in the schedule.”

For Crossley, achieving the team’s overarching goal of an NCAA berth is a process that plays out one step at a time.

The BU women’s ice hockey team opens its regular season against Providence College on Sunday, September 25, at 3 p.m. at Walter Brown Arena, 285 Babcock St. Tickets are free for students with a sports pass, $4 for faculty, staff, and students without a sports pass, and $6 for the general public. The game will be streamed live here.