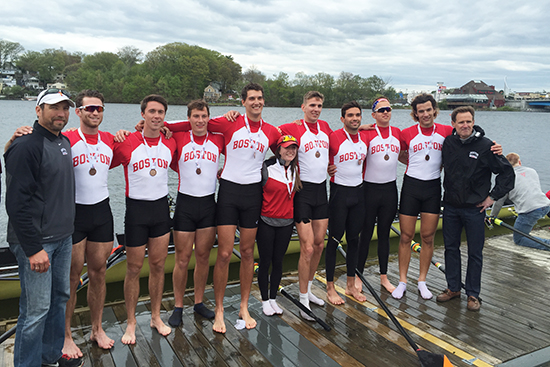 The No. 9-ranked BU varsity eight boat will compete at the IRA National Championship Regatta on June 3–5. Photos by BU Athletics

When the BU men’s rowing team and women’s lightweight rowing team compete in the 114th Intercollegiate Rowing Association (IRA) National Championships this weekend, they will be seeking to build on their success at last year’s regatta, where both programs captured bronze medals. The oldest collegiate rowing competition in the US, the IRA championships are considered the top collegiate rowing event of the year.

Last year, the women’s team won two bronze medals and saw all three of their boats finish in the top four. This year, ranked number two in the country behind Stanford, they look to capture their first-ever national title.

The men’s team finished seventh overall in last year’s event and earned their first-ever bronze medal. “We make strides every year,” says Tom Bohrer, the team’s head coach, a two-time Olympic medalist and a 2010 National Rowing Hall of Fame inductee. “Last year, we got our first medal. This year, we want to get all of our boats in the finals and win a few medals and take the next step. We’ve got a better team this year, and I hope we can take advantage of that.”

The men’s team will have four boats competing in the regatta, which begins today on Mercer Lake in West Windsor, New Jersey. Following their fifth-place performance at the Eastern Sprints regional championship on May 15, where they won two bronze medals and had a boat qualify in each of the five grand finals, the Terriers took a couple of days off before beginning a rigorous, twice-a-day practice to prepare for this weekend’s competition.

“We went down to a lake in Rhode Island before the competition,” says Bohrer. “We wanted to get out of the routine of being in Boston. We wanted to change things, try something new. And I think it’s really going to help us, especially with keeping our focus. Let’s just hope it pays off.”

BU will face some of the best collegiate boats in the country this weekend, including powerhouses Yale University and the University of California—the top two squads in the USRowing Collegiate Poll. In all, the field will include teams from 24 schools.

Varsity eight stroke Vassilis Ragoussis (SAR’16) isn’t fazed by the competition. With the Terriers annually ranked among the top 10 programs in the nation, he says that it’s detrimental to focus on other teams.

Prior to the Eastern Sprints regional championship, the team’s varsity eight boat earned a 6-1 record, finishing the season with five consecutive cup race wins—their only loss coming in late March against No. 5 Brown University.

Looking to emulate and surpass that success at the IRA championships, the Terriers have gone back and looked at tape. After many deliberations between coaches and players, the team came to the conclusion that they were too focused on their technique.

“We simplified our stroke a little,” says Ragoussis. “We had a lot of video analysis and a lot of meetings and that was the result. We just want to simplify it, make it easier and take out all the wasted motion. This way, we get a lot better technically, and we increase our speed and better our form.”

The men’s program feels that the camaraderie they’ve enjoyed all season will work to their advantage as well.

“We pride ourselves on cohesiveness,” says Ragoussis. “There is a huge team bond, even between the seniors and freshman. I think it really distinguishes us from the other schools. We’re always getting lunch and hanging out, making sure everyone feels integrated. I don’t think any other team bonds as much as we do.”

The women’s lightweight rowing team is marking their third appearance at the regatta. They will place three boats in this weekend’s competition: the varsity eight, the second varsity eight, and a varsity two boat. The Terriers enter today’s competition having won gold in the varsity eight race at the Eastern Sprints Championship on May 1, where they also won the Kornad Ulbrich Lightweight Points Trophy as overall Eastern Sprints champion. They hope to face defending IRA National Champion Stanford on Sunday to determine this year’s champion.

“We’re expecting big things this weekend,” says Mariah Ippolito (CFA’17). “This is our third year competing in the national championship and every year we get faster and faster. Each season we set higher and higher standards for ourselves, trying to push ourselves to go harder, faster, and deeper.”

“We are really proud for the opportunity to race for a national championship at the IRAs,” says women’s lightweight rowing head coach Malcolm Doldron, who has led the lightweight program since its inaugural 2012 season. “We anticipate an extremely challenging weekend of racing for all our crews and have been preparing accordingly.”

The Boston University men’s rowing team will race four boats in the 114th annual IRA Championships, and the women’s lightweight rowing team will race three boats, beginning with the first round heats today, Friday, June 3. The top two finishers in each heat will advance to the semifinals on Saturday, and the top three finishers in those races will compete in the grand finals on Sunday. All races will be held on Mercer Lake in West Windsor, N.J. Find more information here.

Emmanuel (Manny) Gomez can be reached at mannygo@bu.edu.

Terriers to Compete in IRA National Championships
3
share this