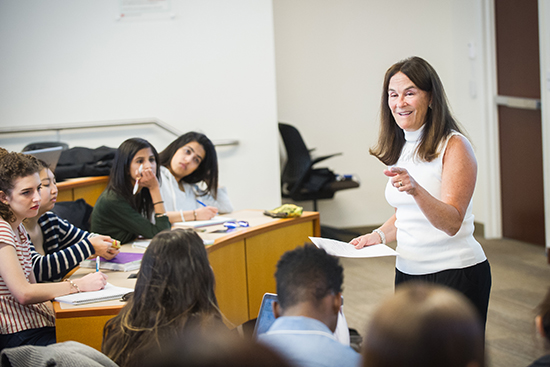 Roberta Clarke, a Questrom associate professor of marketing, offered the Luxury Brands course for the first time this semester. The class quickly filled up, making a waiting list necessary. Photo by Jackie Ricciardi.

Although Hermès Birkin handbags can cost the equivalent of four years of college tuition, consumers have long gone to great lengths to get one. Others save up for years for a Burberry trench coat or a Chanel quilted purse. Why are goods like these—beyond the reach of many people—so coveted?

The reasons are analyzed in Roberta Clarke’s new marketing class, Luxury Brands. The Questrom course is meant to give students a fundamental understanding of, and a managerial perspective on, the multibillion dollar global luxury goods market. They read case studies, hear from guest speakers, like the fashion director and senior vice president of Neiman Marcus and the director of Boston’s Tiffany & Co., and do a deep-dive project analyzing a luxury brand of their choosing. Classes have focused on the counterfeit market, sustainable development, and China’s insatiable interest in luxury goods.

The new class was engendered in part by the $50 million gift last year from BU trustee Allen Questrom (Questrom’64, Hon.’15), retired CEO of luxury department stores Barneys and Neiman Marcus, and his wife, Kelli Questrom (Hon.’15). Questrom and Clarke, a Questrom associate professor of marketing, thought it would be fitting to create a class based on his area of retail expertise. Fervid student interest was another reason for the class, Clarke says. Enrollment quickly topped off at its capacity of 50 students, necessitating a waiting list.

“There’s a growth in the luxury market—it’s been growing faster than any other part of retail,” says Clarke, referring to the fact that the overall market for luxury goods has grown steadily since the end of the recession “Given that it’s becoming an increasingly significant segment, it seems to make sense that we ought to be addressing it. We have a lot of students who are very interested in luxury brands.”

That interest was evident on a recent Tuesday morning, even though the class (mostly seniors) seems a little sleepy at the outset. The day’s discussion focuses on the decision luxury brands wrestled with a few years ago about their online presence. To appear more exclusive, some brands opted to have bare-bones websites, with no prices available (like Chanel, until recently), while others were more willing to create an online presence.

Clarke has the class break into four groups (getting the sedentary students moving a bit) to present the information found in their case study on luxury goods holding company Kering, which owns brands like Alexander McQueen and Balenciaga. One group argues that luxury brands should remain off the internet to preserve an air of mystery. Another takes the stance that companies should have a presence online, but not actually sell their goods, the idea being that customers could research an item, but would then have to go into a store to purchase it. The third says that luxury brands should sell their goods online, and the last weighs in with the position that brands should sell only certain products, like lower priced lipsticks, online.

One reason that luxury brands resisted an online presence for so long, Clarke tells the class, is because they felt strongly about what shoppers experience when they walk into a brick-and-mortar store—it’s the only way customers can smell a $2,500 leather handbag or feel a $400 silk Hermès scarf. Another benefit of shopping in a store, these retailers say, is the chance to build strong customer relationships. By way of example, one student who regularly visits a local department store’s NARS makeup counter says that now when a new shipment comes in, her favorite saleswoman puts aside makeup for her. Other students have similar stories.

“The case we read says that the stores are almost like an art exhibition,” one student says. Clarke asks the class, is there a way that brands can re-create this feeling online? Can personal experiences happen online? These days, using augmented reality, luxury brands are attempting to allow customers to try out their products, along with algorithms to keep track of what is bought.

With luxury brands now available to customers around the world, another issue creeps in: exclusivity. Michael Kors and Coach bags now seem to be on the arm of every other woman in North America, which has put the kibosh on their popularity. Customers notice, and move on to to another, less ubiquitous label. “One of the rules of thumb of luxury is scarcity and exclusivity,” Clarke says. “If everyone has it, then it’s not special anymore. You finally appreciate it once you have it in your hands.”

David Lowe (Questrom’16) says he took the class because he grew up loving the editorial pages of Vogue, Harper’s Bazaar, Elle, and GQ. “Although I have never been in the socioeconomic class to be able to buy such luxuries,” he says, “I have been curious about the psychology that goes into the marketing and curation of luxury brands.” This class, he says, has taught him how each luxury brand adopts its own unique formula to market itself.

One Class, One Day: Luxury Brands

There are 4 comments on One Class, One Day: Luxury Brands